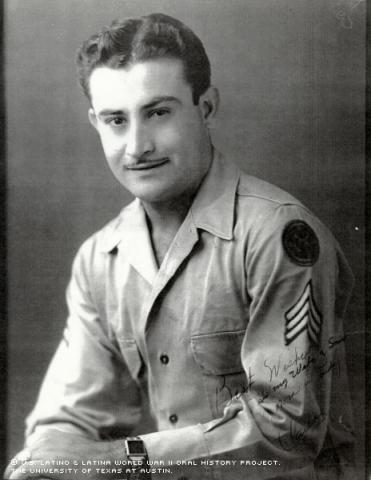 There was once a possibility that Carlos Quintana would never be able to tell his own story. Wounds suffered in battle on the Pacific island of Saipan during World War II left him hardly able to speak or eat properly for six years.

But, when interviewed in 2000, Quintana was easily able to recount his belief in the importance and power of education in his life and that of future generations.

"The most important thing is to be educated," he said.

Quintana’s parents, José Quintana and Rosa Carrillo, both received college educations from the Instituto de las Bellas Artes in the state of Chihuahua, Mexico. All nine of the Quintana children finished high school, and seven completed college. Quintana, who was born in 1920 in El Paso, Texas, could read and write by the age of 4. By age 5, he jumped four grade levels to the 5th grade. At that point, the family moved to Cuidad Juarez, Chihuahua, because Quintana's mother had always wanted to return to Mexico and his father wanted to make sure his children learned the Spanish language.

Knowledge and experience in the trades enabled Quintana's father to provide for his family. Quintana recalls that his family didn’t suffer economically during the Great Depression the way the majority of families struggled across the country. At that time, Quintana's father was in charge of two hotels and stores in Ciudad Juarez.

Quintana attended the lower grades in Ciudad Juarez, but ultimately attended and graduated from El Paso High School, across the border.

He then attended the University of Mexico, in Mexico City, for two and a half years. Quintana's father became ill, however, so Quintana returned to El Paso and began working at El Paso Smelting, a copper smelting plant, to help his family financially. Despite his education, he still had to work as a laborer because he was in the position of having to support his family.

While employed at El Paso Smelting, Quintana became aware of injustices toward the workers: Among other issues, they had no form of protection or health insurance from the company.

Quintana decided to leave. He accumulated some money and began contracting work for James and Abbott Realty. Then, on Sept. 21, 1941, he was called into service.

Quintana was trained as a member of the elite United States Army Ranger forces, a special group that began in World War II as scouts. The Rangers in WWII were similar to the British Commandos and, in fact, Commandos trained the1st Ranger Battalion of 450 men. As part of his training, he learned how to defeat an opponent without a weapon, as well as acquired hand-to-hand combat and navigational skills. Specifically, he learned about the weakest points of the human body, which are underneath the nose and between the eyes.

In a calm voice, he noted that it’s easy to kill a person with a blow to these areas.

Quintana completed his training on Dec. 6, 1941, and was ready for a 30-day leave to go home. But the bombing of Pearl Harbor changed those plans: He was sent to join Company L of the 165th Infantry -- also known as the "Old Fighting 69th" Irish Infantry Regiment, 27th Infantry Division -- and protected the Hawaiian Islands in the aftermath of Pearl Harbor.

Quintana was involved in the New Guinea Campaign, as well as the Central Pacific Campaign on Makin and Saipan Islands. Saipan was the final and most deadly of the battles. He became the reconnaissance sergeant and guided his company during the attack. The importance of this battle was to secure Asolito Airfield, a strategic point that would allow B-29s to land and potentially launch an attack on Tokyo.

It was in Saipan that Quintana received the injury that left him nearly speechless for six years. After the battle, he was delivering a report to his captain when the Japanese launched a mortar attack. Mortar fragments pierced his tongue and severed a major artery in his mouth, causing him to lose massive amounts of blood.

Quintana spent the remainder of WWII in hospitals in Hawaii and elsewhere. His regiment went on to fight in the Battle of Okinawa and was selected as the Japanese occupation force.

He talked about the brotherhood within the company, recalling that it didn't matter whether they were Italian, Jewish or Polish -- they all watched out for each other.

"Guys in the battlefront -- that's where you find the pureness of a man. There's no discrimination ... I don't know why people believe they're better than anyone else. We're all children of God," Quintana said.

He also said he never had any problems with discrimination in the Army because he learned from his parents to respect and be respected.

"I demanded respect. It's up to the way you behave, the way you act. You have to defend your rights because you're just the same as anybody else," Quintana said.

While recuperating in the hospital, he felt confused and "disgusted with the whole thing" of war, he said. He saw people carrying on, making money and going to dances while he had visions and nightmares of his friends, particularly of a sergeant who’d been killed. He remembered seeing fellow soldiers lose it after battle, killing themselves so they wouldn't have to go through it again.

"People have no idea what a fighting man goes through," Quintana said.

When the war ended, he was in William Beaumont Army Medical Hospital in Fort Bliss in El Paso, Texas. Initially unable to eat solid foods and hardly able to speak, he was down to 89 pounds and fed intravenously, but he said he thought positively because he is a strong believer in God. Since Quintana struggled to communicate by only muttering words, he began practicing Spanish linguistic exercises he’d learned through his education in Mexico. This enabled him to eventually regain his normal speech after six years of progression. Wounds Quintana suffered on the island of Saipan severed the nerve that allows normal movement in the human tongue during speech and eating, so the linguistic exercises aided him in moving his tongue correctly again in order to properly eat and speak.

Doctors recommended he move to San Diego, Calif., because of the constant semi-tropical environment. After 29 months in the Pacific, his blood had thinned and the El Paso weather was too harsh.

He married Esperanza Juarez in 1965 and they had three children. In 1970, he became part of the founding group for the Barrio Station, a youth center that strives to keep kids off the streets in San Diego.

Back in his younger days, Quintana had friends who were pachucos, a term for the counterculture created by groups of young Mexicans and Mexican Americans to resist the homogenized view of youth identity in America. These pachucos had their own distinct dress style and dialect. Quintana said he always defended them.

"People would blame them because they are not able to express themselves from one language to another," he said. "People forget that during the Mexican Revolution, a lot of families were afraid and crossed the border. They were not able to send their kids to school because everyone had to go to work, not for the lack of intelligence, it's because they were forced to work -- to survive."

As of 2002, Quintana had been involved with Barrio Station for 30 years as the board of directors’ president. Through his membership in the Military Order of the Purple Heart as a combat-wounded veteran, he was also speaking to students and parents involved in San Diego High School and college ROTC programs.

Quintana said he believed his mission in life wasn’t complete after the war, so he devoted himself to educating and supporting the young. He had the need to be useful since God gave him a chance to live after being severely wounded.

"The most important thing for all of us is our duty to educate, guide and support our children, because they represent the future of our country and the security of our freedom," he said.

Mr. Quintana was interviewed in San Diego, California, on September 29, 2002, by Rene Zambrano.