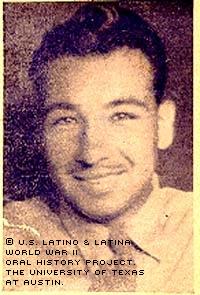 Candelario Hernandez' family moved to East Austin in 1931 from Seguin, Texas. The only time he left East Austin since then, was during World War II, when he served the United States Army in New Guinea.

Hernandez was born on February 2, 1920, in Seguin, Texas. The oldest of eight children - five brothers and one sister -- he often felt pressure from those around him. His only escape was to explore the nearby woods.

"I don't know what I was looking for myself, but I was just looking," said Hernandez. "I would fish and run around by myself, it was just me and the birds."

The Hernandez family lived through the Depression on the farm in Seguin. But, because the family farmed, there was less hardship. His grandfather grew a garden about one mile away that fed the entire family. Corn, cotton, and sorghum were grown by Hernandez' immediate family to sell. When he was 11, the family began moving back and forth between Austin and Seguin, settling finally, on East Eighth Street in Austin. His mother, Herlinda Montañez, was a housewife and his father, Antonio, worked at several restaurants. He eventually became a chef in East Austin.

Hernandez' first school, in Seguin, was a one-room facility with one teacher and students of various levels and age groups. When the Hernandez family moved to Austin, Hernandez and his siblings attended a parochial school at Our Lady of Guadalupe Catholic Church, also in East Austin. That was where all of the neighborhood kids went, so it was easy for Hernandez to find friends fast. Allen Middle School was his next stop and, finally, Austin High School.

To help his family, Hernandez worked part-time as a bus boy in small restaurants. He would clean floors and do dishes for small amounts of extra cash. His uncle, who was a watch repairman, also hired Hernandez to help him repair watches. He left high school in the 11th grade at age 19.

In 1941 Hernandez enlisted in the United States Army. He had only been enlisted for a month when the Japanese bombed Pearl Harbor on December 7, 1941. He was on weekend leave from Fort Sam Houston in San Antonio. As the family listening to the radio during dinner that weekend, a special report began announcing the news. Immediately there was a call for all of the servicemen to return to the base and report for duty.

"It was scary," said Hernandez in a recent interview, "because you didn't know what was happening."

When the training was finished they moved to Fort Ord, where they stayed for two to three weeks before while waiting for deportation overseas. That was where Hernandez was assigned to the 32nd division.

The 32d division, a former National Guard Battalion that had been called in to active duty during peacetime by Congress in 1940, originated in Wisconsin. The division led Hernandez to meet people, different backgrounds, from different parts of the country.

The division was moved to Australia soon there after. Six months of constant training and marching were spent in Port Adelaide.

The division's first battle was in Buna, New Guinea beginning on November 15, 1942. The troops were brought in because the U.S. had information that the Japanese had ships full of reinforcements on their way to fight. No ship ever arrived, but the battle was important for the success of the U.S. in the South Pacific Seas. Although the U.S. was low on supplies and food, they managed a victory.

"I lost a lot of buddies there," says Hernandez. "Oh, it is awful. I wouldn't wish that on anybody. It was awful."

Some of the worst experiences for Hernandez were trying to get through the jungle with the mosquitoes and the leeches. Machetes were used to chop a path through the thick vegetation.

"The jungles are something; we were always fighting something," Hernandez said. "You don't even see the sun in the daytime."

After the first encounter in New Guinea, most of the men in the division came down with malaria. Hernandez was among those affected.

Hernandez was in battle with a fever of 103. Not realizing he was sick, he was puzzled about why he found himself running and falling down.

"I was wondering, 'Why am I falling down? I am not that weak,'" he said later.

The sick men were taken into isolation in Australia, where they were treated.

"They took us to a place up there that was near the ocean. That was part of the therapy to cure you from the malaria," he recalled. "All we did was swim and take sun baths. We were taking some sort of pill that was called Atabrine."

The division was then sent again to New Guinea. Hernandez was called to action once again to fight in Aitape, New Guinea, and this time as a staff sergeant. Hernandez was in charge of twelve men after only being in the Army for a year and a half.

When his division landed, there was no opposition. However, as they crossed the Driniumor River they ran into several Japanese boats. Dense jungle and towering trees on both side masked movement on the opposite banks. His division's mission was to hold the river line as long as possible in event of an attack. It did: the Japanese never got through.

From there the 32d went back to the Philippines. The Japanese had taken over Leyte Island. The goal of the United States was to seize and occupy Leyte through a series of phases.

"But I got lucky," Hernandez said. "During the time that I was [in Austin], the war was over, so I never did go back."

Hernandez received three medals for his service during World War II. A campaign medal with three bronze battle stars - one for each of the battles he fought in, and the American Defense Service Medal. Though it is not marked on his papers, he also received the Good Conduct Medal. Unfortunately, Hernandez never received these medals and he does not know why. His son-in-law is currently looking into the matter.

When Hernandez returned home, he had a recurrence of malaria. There was another serviceman on his block that also came down sick sometimes. They would often share the Atabrine pills that the Army issued to them after the war. The disease would come and go for three years after the end of the war. Something as simple as a hot day could trigger an episode of malaria.

It took Hernandez two years to find a job upon his return partly because of his sickness and partly because the job market had been filled by others while he was overseas.

Hernandez worked repairing watches again until a better job came long, with Hall Levels. They made levels, which are used to measure the tilt of a surface. It was very close to his parents' home and he was able to walk to work.

Three years after the war, in 1948, Hernandez fell in love and married Maria Macias. They had been longtime friends. She lived on East Eighth Street alongside the Hernandez family and was able to become close friends with Hernandez's aunt through church.

They dated for about one year before they were married. After their marriage, Maria was a housewife and raised their two daughters, Maria and Claire Susan. She also did house work for several other families, groups of people in the neighborhood, and at Our Lady of Guadalupe Catholic Church.

His two daughters and six grandchildren are an active part of his life.

Since Hernandez returned from World War II he had been active in his Church and former school, he played baseball, and played guitar in a mariachi band called "Rayos del Sol," and still enjoys fishing the way he did as a child in Seguin.

He is treasurer of the Guadalupe Neighborhood Development Corporation. He has been a member for the last 15 years. The organization was created in 1981 when the City of Austin wanted to build a park in the neighborhood. This park would have displaced many homes. The neighborhood group used the money that would have been spent on the park to help others build houses and fix houses. Now the money that they have is used to help members of their community find homes throughout Austin.

Hernandez' own parents lived until they were very old. And he has had to adjust to an older body. In fact, when he was 53 years old, some of the neighborhood kids requested his help on a baseball team.