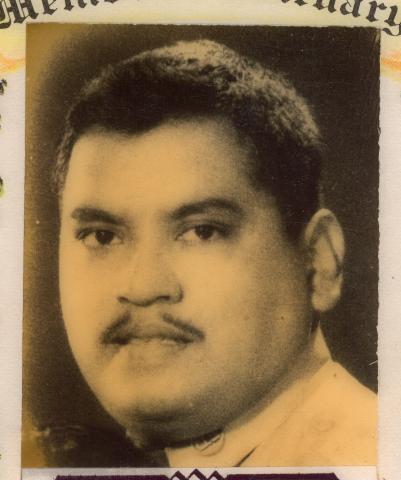 As a young man in San Antonio, Caesar Castro was an accomplished pianist.

His talent caught the attention of a group of famed California musicians who wanted Caesar to move west with them, so that they could mold him.

Castro didn't take the offer; but even so, his musical skills continued to grow.

Castro was born on Oct. 27, 1924, in San Antonio, Texas. He had a half-brother, Alfred, and a half-sister, Margaret, from his father's first marriage. And he had two more siblings born to his father and his mother, Maria Villarreal Castro.

His father, Luis Castro, was an accomplished musician who had studied in Mexico and had become well-known in Texas, even playing with the San Antonio Symphony.

The elder Castro taught all of his children musical theory, "solfeo," before they could choose an instrument to play. Two of them - Caesar and his older brother, Alfred - became professional musicians.

During his senior year of high school, the United States entered World War II. Caesar Castro left school and enlisted in the Air Corps at Kelly Field in San Antonio.

With his musical background, Castro served in the Air Force band throughout his military career, from 1942 to 1960 - 16 years and nearly eight months.

In addition to his piano skills, Castro was a member of the Air Force marching and concert bands, playing trombone, baritone, French horn and tuba.

Castro married Aurora Gonzalez on May 25, 1945, and the couple had three children, two sons, Caesar Charles and Mark Anthony; and one daughter, Jacqueline Adrienne.

The family settled in San Antonio, where they built their house in 1950.

In 1952, Castro was transferred to Wiesbaden, Germany. His family had planned to join him in Germany, but before they arrived, he was transferred again, this time to North Africa.

In 1954, Castro's family was finally reunited at Wheelus Air Force Base in Tripoli, Libya.

In 1956, Castro was transferred to Eglin Air Force Base in Walton Beach, Fla., where he and his family remained until he was discharged from the Air Force in January of 1960, leaving as an airman basic.

During his 16 years of service, Castro was awarded a Good Conduct Medal, an American Theater Campaign Medal and a World War II Victory Medal.

Castro continued to perform and freelance in the music business until his death on Aug. 25, 1966.