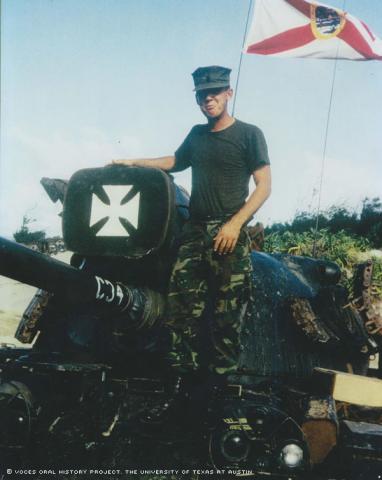 Marine veteran Robert "Bobby" Biers recalls more distress as a drill instructor dodging comments from mothers than when he was on the frontlines in South Vietnam.

"I had these mothers calling me up, asking me, 'what did you do to my baby? He has manners, and he's polite. He lost 100 pounds. He's lean, mean and tough,' " Biers said.

"Tough but firm" is how Biers described the Marine Corps' approach to making new Marines.

Biers was born in Pittsburgh in 1937. He was a child when his parents divorced, and his mother, Mary Elizabeth Simpson, moved Biers and his older brother, William, to Phoenix. She worked at Goodyear, he said, and she tried to be both mother and father to her boys.

"For a time, we lived in a cabin and slept on the floor," Biers said. "The bad times taught us to appreciate the good."

Maricopa County, Ariz., was a fine place to grow up, Biers said. It was relatively small at the time, with about 86,000 residents. Many Korean War and World War II veterans were around to influence Biers in the absence of his father.

Biers recalled never having any problems finding a place to fit in, despite being one of the few Anglos among his many Latino friends. Throughout his life, Biers continued to identify with and befriend Latinos. He said he felt most comfortable with Latinos.

In grammar school, Biers was involved with the YMCA and Boy Scouts of America. He enjoyed fast-pitch softball and handball. Biers said he was small for his age. He was cut from football in high school, he said, because he weighed only 98 pounds.

Biers felt destined to be a Marine. His older brother, William, was a Marine who fought in the Korean War. During a visit home, Biers remembered, his brother left his uniform at home and went out with his friends. Biers snuck into his brother's room to try on his stuff.

"I put on his uniform, looked in the mirror and said, 'This is great,' " Biers recalled.

When Biers turned 15 in 1952, he went to the local Marine recruiting office, presented his brother's birth certificate as his own, and tried to sign up. The recruiter was not fooled. He sent Biers home and told him to come back when he was older.

William Biers was proud to hear of his brother's intentions. He told his brother that with any luck, the Marine Corps would "straighten him out."

In high school, Biers met a pretty girl in his homeroom class named Mary Ellen Greenwood, and they became a couple.

In 1954, Biers dropped out of school at age 17, when he was finally old enough to join the Marines. He returned to the recruiting office with his own birth certificate. Mary Ellen supported him. She graduated from high school on June 2, 1956, and they were married that night.

Biers joked that the romance may have given his mother a few of her gray hairs.

He became lifelong friends with the eight other recruits who joined up around the same time from his area of Arizona. He finished boot camp and went on to Camp Pendleton, in San Diego County, in Southern California, where he said that he had learned about "maps, guns, and how to kill people."

"That was my humble beginning," Biers said, referring to his time in boot camp.

Biers also attended administrative chief school in South Carolina. His first assignment as a Marine sent him back to Arizona as a clerk. During this time, his wife had a son, then a daughter, then another son. When their three-year-old daughter died, Biers' assignment was extended while the family dealt with the grief.

Biers went for his next assignment to Okinawa. Biers said that he expected the trip, not the war, but that it was all part of doing the job he'd signed up to do. He was in Okinawa for eight months when his unit was sent to Vietnam in 1965. Since the initial U.S. military force in South Vietnam was deployed to train the South Vietnam military, the men in his unit were not allowed to load their guns. At that point in the conflict, Biers said, U.S. forces had to request permission to fire back when fired upon. Beyond that, Biers didn't talk about the combat.

After three months in South Vietnam, he returned to San Diego, where he was asked to be a drill instructor. By then he had five sons, and they and their mother met him at the airport. They had, he remembered, "the whole place in tears."

Biers recalled that not all Vietnam veterans were being welcomed back with open arms. But, he said, the attitude toward military personnel in San Diego was not as negative as other parts of the country.

"Nobody ever spit on me," Biers said. "No one ever called me a 'baby killer.' I was fortunate because San Diego was a military town."

Biers served as a drill instructor for four years. He enjoyed the job, though he felt immense responsibility for the men he prepared for the Vietnam War.

Then, he went back to South Vietnam for 13 months from 1969-'70, as part of a tank unit. But the war escalated, which meant more Marines were needed, and more instructors were needed. Biers returned in 1970 to the United States as an instructor.

Biers said that it was vitally important to strip the civilian identity from his recruits and prepare them for life as a Marine and for combat in Vietnam.

As a drill instructor, Biers put 19 platoons through recruit training. He trained some Marines who went on to become high-ranking officers, and some of them thanked him for training them so well.

He rose through the ranks, making master gunnery sergeant in 1976. Biers said that the proudest moment of his career was his acceptance as the first Marine to attend the U.S. Army Sergeants Major Academy at Fort Bliss, Texas. His superiors, he said, honored him by sending him to the school. In his final overseas assignment as a Marine, Biers and his wife lived from 1976-'79 in Hawaii, where he served as base logistics chief at Marine Corps Air Station Kaneohe Bay, on Oahu.

In 1981, after 28 years of service, Biers retired so he and his wife could care for their mothers. He remembered that someone from every unit he had served with attended his retirement party.

By the end of the Vietnam War, Biers said that he had lost 109 friends and been exposed to Agent Orange. Since the war, he has struggled with post-traumatic stress disorder.

After retiring, Biers had trouble finding a civilian job. He decided to start his own concrete resurfacing company, which he called Carefree Stone. Biers hired veterans only.

One of his five sons joined the Army while others ran their own businesses.

Biers became active in the veterans' community. He volunteered at the veterans' hospital and became the first Anglo to join his local League of Latin American Citizens (LULAC), at the urging of his Latino friends.

"Then I became old enough to draw Social Security, and I became a little old man," Biers said.

Until health issues got in the way, Biers rode his motorcycle to the Vietnam Veterans' Memorial Wall every year during the Run for the Wall to honor his friends who died during the war.