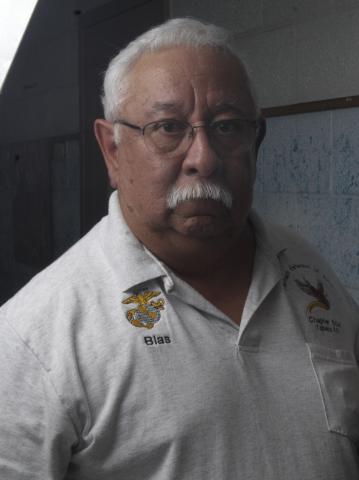 Blas Ortiz had served as an adviser in Okinawa for a few months in 1963 when his unit, Co. E, 2nd Battalion, 27th Marines, 5th Marine Division, was rounded up, issued live ammo and told they would be on the next flight to Vietnam.

When his battalion landed on the shores of Vietnam, they were greeted with gunfire.

“It wasn’t a picnic,” Ortiz said. “No sightseeing.”

Ortiz had graduated from Hayden High School, a Catholic school, in 1963, and had applied with the Santa Fe Railway in his hometown of Topeka, Kansas, hoping to get a job like his father, Gabriel. But the railroad official took note of his age and suggested he should serve his country first. Ortiz said the company was wary of training new workers only to have them drafted shortly after.

After serving his first tour in Vietnam, Ortiz volunteered to return and spend two more tours in the jungle fighting alongside his unit. The decision to return twice more, Ortiz said, was unusual because most servicemen who served one tour opted to make that their last tour. But for Ortiz, it was the brotherhood he felt with his fellow Marines that compelled him.

“We were close,” he said of his fellow Marines. “You knew who you could depend on.”

Like many enlisted men, Ortiz saw the war as an effort to stop Communism in its tracks and aid an oppressed people.

“It was better to fight them there than at home,” he said.

Anti-war demonstrators angered Ortiz. Protesters didn’t understand what the soldiers were doing to help the Vietnamese people, he said. U. S. servicemen were administering medical aid and food, and fighting for their freedom.

Back at home, Ortiz knew what oppression was: certain restaurants in Kansas didn’t allow Latinos or blacks to eat inside. But on the battlefield in Vietnam, race wasn’t an issue. The men in his unit looked out for one another, regardless of race.

He said jobs were evenly distributed throughout the company according to strengths and weaknesses, not skin color.

There were few Latino officers, though. Ortiz said he remembered a Hispanic captain named Gonzalez, a rarity in the Vietnam War. But as a team leader, Ortiz said his race wasn’t an issue.

“I knew my job and I wanted to take care of my men,” he said. “And at the same time, I wanted to teach them so they could survive, and that made me feel good.”

When they weren’t patrolling the jungle in search of Viet Cong, Ortiz and his men spent most of their time in foxholes on base. There was no proper housing, and he said he slept on a bed of sand.

His younger sister, Mary, wrote to him often to relate what was going on with the family back home.

The thing Ortiz missed most was home cooking; when he was a boy, his mother Adelaida Lopez made fresh tortillas every day for her children.

Ortiz was born in Spencer, Kansas (about 8 miles east of Topeka), on Feb. 3, 1944. His parents, both natives of Mexico, had 11 children, five girls and six boys -- all born in Topeka. Twin girls died at birth.

After his three tours, Ortiz was honorably discharged with the rank of sergeant E-5 in 1967. He received two Naval Presidential Unit Citations, the Combat Action Ribbon, a Republic of Vietnam Gallantry Cross, and rifle and pistol sharpshooter medals, among others.

When Ortiz left for Vietnam, his father made a promise to Our Lady of Guadalupe, the patron saint of Mexico: if his son returned, he would take him on a spiritual pilgrimage to her basilica in Mexico City.

After his return from the pilgrimage to Mexico, Ortiz applied again at the Santa Fe Railway Co. The supervisor who had encouraged him to enlist in the military remembered him and hired him immediately. Ortiz worked as a carman welder for eight years.

His life changed in other ways as well. Ortiz married Mary Sanchez, the cousin of one of his friends, in 1969. The couple eventually had four children. She worked as an agent with the Internal Revenue Service.

Ortiz took basic courses at Washburn University in Topeka for a year. By that time, he had children and was still working as a welder for the railway company. The pressures of fatherhood became too much for Ortiz and he was forced to drop out of college.

But Vietnam would continue to affect his life. While in Vietnam, Ortiz almost lost his foot to jungle rot, and his skin was affected by exposure to Agent Orange, a defoliant sprayed over Vietnam’s jungles that is blamed for many veterans’ ailments. At the time of his interview, he said he still got treated regularly for the sores caused by the chemical.

He also endured post-traumatic stress disorder. He turned to alcohol to deal with the painful memories and flashbacks, causing an end to his marriage with Sanchez.

At the time of the interview, Ortiz said he had been sober for more than two decades and was still attending weekly group therapy sessions. He and Mary Sanchez remarried some time later. She died in 2003. From 1982 to 1988 he was married to Dorothy Guilfoyle.

In 2006, he married Linda M. Watson Cross, a 23-year Marine Corps veteran who worked as a clerk for the Veterans Affairs Medical Center in Topeka. Ortiz said his wife understands his affliction.

He said he wouldn’t change anything about his war experiences. He feels proud to have served his country. And he felt empathy for the Vietnamese. Ortiz said he cared for the Vietnam villagers he met and was shocked by their poverty and oppression.

“I remember sometimes that there was some beauty to that country, and it’s sad how it was devastated,” he said.

Mr. Ortiz was interviewed by Catherine Shepherd in Topeka, Kansas, on June 16, 2010.