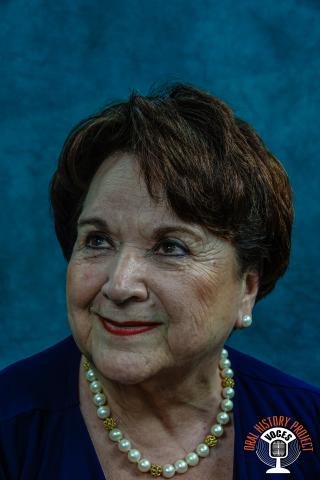 Over a long career that included positions in government and education, Cardenas Flores helped pioneer efforts toward equal opportunity in the K-12 system and higher education. She eventually became the first Latina president of a University of Texas System institution.

She often thinks back to a moment in her childhood when she and her friends walked to the one-room “Negro” school in their South Texas town and saw its poor condition.

“It made such an impact on me,” she said. “We were a very poor school district; they had the hand-me-downs from us, and I just felt like it was so wrong.”

She was born Oct. 25, 1944, in Del Rio, Texas, one of three daughters of Rudolpho G. Cardenas and Amelia “Molly” Blythe. Her father managed the meat department at a grocery store and later at an Air Force base. Her mother worked in retail.

When she was a child, the family moved into the barrio. She went to school in the San Felipe Independent School District, where the students were Mexican-American and mostly poor. Some families didn’t have enough to eat, and many kids left school early each spring to work in the fields.

“We didn’t live with that kind of poverty,” Cardenas said, “but I came to know that barrier that poor kids, and particularly poor Mexicano kids, had to live with, and I hated it. … I remember I must have been 5 or 6 years old when the light bulb went on, and the only thing I ever wanted to do was to change that.”

Cardenas Flores was just 16 when she went to college, first at Texas Woman's University and then at the University of Texas at Austin, where she pursued a degree in journalism. But UT was not as welcoming as she had expected. The Daily Texan, the student newspaper, “was not very inclusive,” she said, and one teacher said the fact that she spoke Spanish interfered with her ability to write in English.

After graduating in 1967, she worked for a while at the American Bar Association in Chicago. But she was drawn back to Texas. “It was the thick of the civil rights movement. I woke up one morning and said, 'What am I doing in Chicago when the only thing I ever wanted to do was to change things in Texas?'”

Teaching high school in Del Rio, she saw firsthand the challenges poor kids faced to get an education. “Some of the kids did not know how to read. I saw that something had to change.”

A plan to earn a master’s degree was derailed when she got a job at the Southwest Educational Development Laboratory research institute in Austin. The executive director, Jose Angel Cardenas (no relation), would become her mentor and help shape her career.

Her subsequent resume is filled with increasingly high-profile roles in government and education.

+ In 1969, when Jose Cardenas was named superintendent of the Edgewood School District in San Antonio, Cardenas Flores became a special assistant. Together, she said, they expanded the budget and turned the district into a national model for teaching Mexican-American children.

+ The University of Massachusetts-Amherst heard about their work and invited her to join the doctoral program there; she earned the degree in 1964. The Rockefeller Foundation then recruited her for its leadership development program, where she was assigned to work with U.S. Sen. Walter Mondale.

+ She represented the United States at high-profile international gatherings, including as delegate to the United Nations Conference for Women in 1980.

+ President Jimmy Carter appointed her to leadership roles in his administration, including overseeing major programs for children and families and in 1980 named her to the U.S. Commission on Civil Rights.

That same year, she and her husband, Andrew Reyes Ramirez, an assistant city manager in Austin, had a son, Alexandro. But her work on the commission was demanding and stressful, and the marriage ended.

When Ronald Reagan was elected president, he tried to remove Cardenas Flores and Mary Frances Berry, an African-American member, from the commission. With help from the Mexican-American Legal Defense and Education Fund and the NAACP, they sued, saying the president had exceeded his powers and violated the independence of the commission.

They won, and Cardenas Flores stayed until 1992, when she went back to Texas to oversee a reorganization of the University of Texas-San Antonio, including the creation of a College of Education. She became the first dean, raising millions in outside funding and raising teacher success rates on the certification exam.

When Miguel Nevarez announced he was resigning as president of UT-Pan American in Edinburg, at the very tip of Texas, Cardenas Flores knew she would be a long-shot candidate. The UT System Board of Regents was dominated by Republicans, and she had sued Ronald Reagan and won.

Much to her surprise, in August 2004, she was named president of UTPA, where she made strides in raising financial aid, retention rates, and the number of students receiving graduate degrees.

Cardenas Flores remembers working with Juliette Garcia who in 1986 was named president of Texas Southmost College. Garcia was the first Mexican-American woman to be president of a U.S. university.

They would attend the meetings where the Board of Regents would allocate money from the state’s Permanent University Fund to Texas A&M and UT System universities. While UT Pan American was a UT System institution, Cardenas Flores said the formula used to allocate the money worked against her university. The focus was on programs for students in advanced programs, and UTPA focused on students in the earlier years of college.

“We got to go to the party, but we didn’t get to sit at the table,” Cardenas Flores said. “The money wasn’t flowing to create the programs, so if you don’t have the programs, then the formula doesn’t give you the money to build them up."

In spite of the hurdles, Cardenas Flores said, "On every indicator, we showed tremendous progress."

“What we accomplished given our small amount of money is a miracle," she said. “It’s a miracle of the determination of the students and incredible staff, and a lot of dedicated faculty. But we also ended up sometimes with people that we had to take because we didn’t have the money to pay for the best."

Cardenas Flores resigned from the job in 2008. She lives in McAllen with her husband Rafael Flores, a lawyer, whom she calles "the love of my life."

Cardenas Flores’ work to assure minorities equal access to quality education has had an impact across the country.

Interviewed by Nathalia Hernandez in Brownsville, Texas, on April 2, 2017