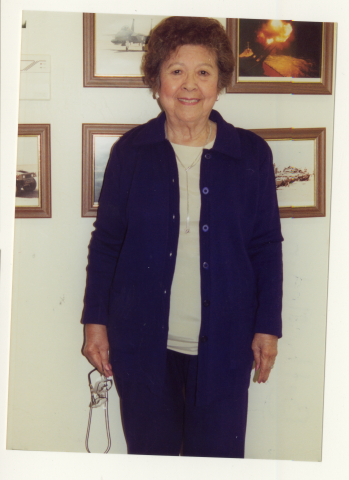 During World War II, commissioned military officers would receive deployment orders by telegram, often believing they’d been called up for duty by their senator.

Little did they know that the assignments were actually issued at random by people like Betty Muñoz Medina, who got an entry-level job at the War Department (now the Department of the Army) when she was 20.

Each card contained the name and rank of a commissioned officer, and it was her task to alphabetize them. After performing well at the sorting position, Muñoz Medina was promoted to filing lists of requests for active duty officers from different bases and camps.

She’d randomly match a request with one of the index cards, based on military rank.

"We looked for them and pulled them out. We didn't even look at the names; we just looked at the ranks and handed them to the supervisor," she said.

Muñoz Medina was born and reared in Tucson, Ariz., the sixth of eight children. The household included her parents, three brothers, four sisters and a grandmother.

The large family was able to get by on the salary of her father, who was a landscape worker at the University of Arizona for 17 years.

His career was abruptly cut short in the late 1920s, however, when the state of Arizona adopted a new law requiring all state employees to be American citizens.

"My father was not, so he had to be laid off," Muñoz Medina said.

This turn of events proved to be especially difficult for the family.

"Of course, the Depression came around at that time," she said, "and things were not easy for us."

Her father had trouble finding work, so some of her siblings got jobs to help support the family. One of her brothers labored as an auto mechanic, and another sought out various odd jobs. Her older sister, Carmen, fared better, finding employment as a salesperson -- and later manager -- at a department store.

Muñoz Medina graduated from Tucson Senior High School in 1939, but was unable to find a job. She began staying home and helping her mother around the house, earning money by ironing clothes they took in.

Eventually, Muñoz Medina met a woman who was a supervisor at the National Youth Administration, a New Deal organization that created part-time employment for millions of disadvantaged high school and college-age youth.

She was given a job at a local marshal's office, processing paperwork for prisoners who were being paroled. At the urging of the woman who recruited her, Muñoz Medina filled out a Civil Service application and took a test in typing and shorthand. In 1940, she received a letter from Washington, D.C., offering her a position at the War Department.

Her parents didn't want her to leave, and Muñoz Medina was apprehensive herself, as she’d never traveled outside of Tucson. Her sister Carmen, however, encouraged her to go.

"You must go. You have to get out of here and get some experience,"Muñoz  Medina recalled Carmen saying.

Carmen was able to procure a loan to buy her sister a one-way train ticket to D.C., and cover housing for a couple of months.

With the grudging blessing of her parents, and accompanied by another Tucson girl who’d also gotten a job at the War Department, Muñoz Medina set out for the nation's capital.

The two young women were at first overwhelmed by the large eastern city, but thanks to help from the clerk at an information desk in the train station, they were able to find a room to rent the day they arrived.

Muñoz Medina began to acclimate to her new job, but felt out of place. She was the only Latino in the office, and most of the other workers were much older then she.

There wasn't much opportunity for socializing, however, as only one employee at a time could be on break, and everyone worked in one of three daily shifts, six days a week.

Muñoz Medina was frightened one day after arriving at work and encountering several high-ranking officers milling around the office. She was confronted by her supervisor, and asked if she had ever read the race listings on the forms from bases requesting officers. Frightened for her job, she replied that she hadn't.

"From now on, be sure to do that," the supervisor said.

It turns out that Muñoz Medina had made the mistake of assigning a black officer to a white unit -- something she’d never even thought of as an issue.

"I didn't know anything about discrimination. This was the first time I had heard the word," she said.

Meanwhile, while Muñoz Medina was in D.C., her older brother, Paul, was fighting in the South Pacific as a member of the Army Medical Corps.

"He was the one in what we called the 'danger zones,' but nothing ever happened to him, thank the Lord," she said.

Muñoz Medina was able to covertly keep tabs on Paul in a couple of unusual ways. For one, she’d occasionally sneak into a depository room at the War Department, where the personnel files were stored, and peek into her brother's file.

"I knew I wasn't supposed to," she said.

She never got caught, however, and even says she looked up the files of old friends and neighbors from Tucson to check up on them.

Muñoz Medina corresponded with Paul regularly, but their communications were stifled by the censorship applied to correspondence from soldiers overseas. The military edited the content of all outgoing letters to hide the location of American forces and prevent sensitive information from falling into enemy hands.

"Lots of times [the letters] were cut off and you wondered 'what did he want to say?'" she recalled.

Muñoz Medina and her brother were able to circumvent this by developing a code, which allowed her to track the places he was being sent to in the Pacific. In her letters, she designated a certain salutation ("Dear Betty," etc.) for each area in which he could potentially be stationed. She instructed him to begin his letters with the salutation that corresponded to his current location.

"I'd always know where he was by following that code," she said.

Muñoz Medina was eventually joined in D.C. by her younger sister Jane, who got a job at another government office. The sisters moved in together, and helped each other adapt to city life.

Before coming to D.C., however, Jane had met and fallen in love with Paul's best friend in the Army.

"She said it might have been love at first sight," Muñoz Medina recalled.

"He proposed by mail, and she accepted by mail," Muñoz Medina said.

Jane's fiancé returned from the war, and they planned to get married shortly thereafter. Getting permission to travel home to Tucson proved to be troublesome, however: Jane was denied a railroad ticket, even to get to her own wedding.

"If it wasn't anything toward the war effort, they wouldn't sell us a ticket," said Muñoz Medina, who had even less luck getting home than her sister; in fact, she was even denied leave from work.

Resorting to cunning one more time, Muñoz Medina was able to get their hometown doctor to send a fabricated note saying a family member was ill. The ruse was successful, and the pair left D.C.

After getting married, Jane sent in a resignation to her job; it was approved and her tenure in Washington was over. Muñoz Medina did the same, however her resignation wasn’t approved.

"I got a telegram, and it said 'Resignation unaccepted. Return to work,'" Muñoz Medina recalled.

Wishing to remain in Arizona with her family, she went to the state employment office in an attempt to appeal the decision. Because state employment services were federalized during WWII, the office had the authority to transfer Muñoz Medina to a government job in Tucson.

She ended up with a position at the employment office itself, where she worked as a receptionist. After overcoming some initial uneasiness about dealing directly with the public, Muñoz Medina came to enjoy the job. She got married and stayed there for 37 years, rising to Assistant Manager. She went on to manage a worker training program for the city of Tucson before retiring.

Muñoz Medina reflects fondly on her time in D.C., and attributes her subsequent success to the skills and experience she gained there.

"Going to Washington really helped me," she said. "I really feel that if I had not gone to Washington, I would have been a sales clerk or even a motel maid."