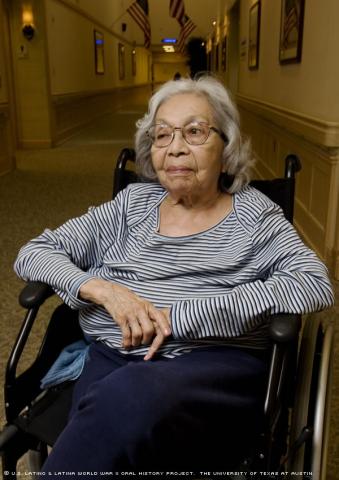 Berta Parra’s memory is slipping away from her.

People, places, names, dates – as she sat in an armchair at the Ambrosio Guillen Texas State Veterans Home, in her native city of El Paso, she worked through the gaps to tell her story. Despite the haze of a fading memory, a few images stood resilient in her mind – ironically, the images Parra had tried the hardest to forget.

Stationed as a nurse’s assistant for the Navy in Corpus Christi, Texas, during World War II, Parra had to juggle the stress of her job, fear for her brother fighting abroad with the Army, and the daily barrage of news updates from the war. It was the nightly radio broadcasts about the war’s destruction, not to mention the newspaper clippings with updated and ever-increasing death counts, that Parra was unable to push out of her memory.

“You could see the bodies, they threw the bodies everywhere . . . I wanted to forget all that,” she said. “Everything is going out of my head, thank God. But the bodies, I can’t forget.”

As part of one of the earliest groups of Latina women to serve in the United States military, Parra is part of a legacy that is drifting away.

Before the war, Parra led a relatively simple life in El Paso. One of four children of a stay-at-home mother and a film projectionist father – both originally from Mexico – Parra’s childhood sometimes provided a distraction from the Depression.

“But it wasn’t very expensive at the time, and the place was full of kids.”

Once paychecks were almost depleted, however, reality set in.

And discrimination was a fact of life.

Parra said it was public knowledge that different groups were relegated to separate facilities.

As she got older, the divisions between Parra and more fortunate families became more obvious, and she left high school before graduating, embarrassed that “some of the girls were well dressed and I wasn’t.”

Parra trained to become a beautician, but when the long hours on her feet turned painful, she became a nurse’s assistant at Beaumont Hospital in El Paso.

“Then I went to nursing, which worked better for me. I liked it better,” Parra said. “But I worked at night, and it almost killed me. Night duty is very hard.”

Shortly after Parra left school, the United States entered the war, and her brother, Silvestre, was drafted.

“We were all sad,” she said. “My parents weren’t too happy.”

With the intention of joining a group of friends in California, Parra enlisted in the Navy as a nurse’s assistant, but her orders came for her to go to Corpus Christi as part of the Women’s Auxiliary Corps.

It was in Corpus Christi, while tending to veterans from World War I, when Parra witnessed death for the first time.

“There were some older people in the hospital who were really sick; some of them died,” she said. “I used to cry when they died. I didn’t even know the people. It was too much for me, to know that they had gone. It was a terrible thing.”

Parra vigilantly kept informed of what was happening abroad, learning the names of every plane and ship, writing her brothers and, when circumstances were really bad, mourning the death of people she had known.

“Especially at night, when I was in bed, I’d turn on the radio and listen to what was happening,” she said. “I kept track of everything concerning the Navy.”

“There was a whole lot of kids I knew [in the war],” she continued. “And I say ‘kids’ because I mean, sincerely, kids. Some of them didn’t come back. It killed me.”

Although her brother survived the war, Parra recalled getting a scare while in Corpus Christi.

As a distraction, Parra used the weekends she wasn’t on duty to go to the local dance halls.

“I met a lot of nice people there,” she said. “We used to dress real nice and go to dances. No liquor, though. I didn’t drink.”

Female service in the military was at one of its earliest points during WWII, and Latinas were largely underrepresented.

“The men were OK with me being a woman,” Parra said. “The women, too. Sometimes we were with the women, the wives. It was nice.”

When Parra was discharged on disability, she left Corpus Christi and headed back to El Paso, but the vestiges of war stayed with her.

“I used to go to a lot of funerals. It would be hard for me now, though,” she said. “I used to dream about dead bodies when I was in the service. And, when I got home, I dreamed about them, the dead people, the bodies.”

“I don’t dream about them anymore, thank God,” Parra said. “I don’t want to dream about dead bodies.”

Even with all the time that has passed, it is still hard for Parra to endure all of the deaths that have touched her life, including the passing of a brother and her mother and father.

“I feel the same way when people die. It makes me feel bad always,” she said. “It’s a horrible thing to happen, but we all have to go.”

Parra recalled keeping in touch with friends from Corpus Christi for a while after the war, but they have since lost contact. She said she put her sister, who is now a teacher, through school, and continued her career as a nurse’s assistant. She never married, finding companionship instead in her two dogs, Lulu Bell and Pedro.

When asked if she had any final thoughts, it became clear once again that Parra’s vanishing memory had not erased the impact WWII had on her.

“It was a terrible war,” Parra said.