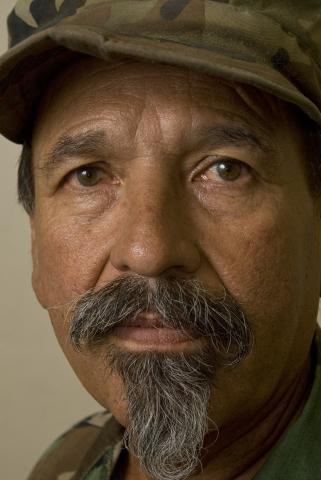 Looking back on his experience while serving with the U.S. Marines in Vietnam, Ben Rivera evoked three years full of uncertainty about making it home, but also friendships that survived his lifetime.

Rivera was born Feb. 12, 1949, in Tucson, Arizona. His father, Benjamin Rivera, worked installing glass windows, and his mother, Connie Rivera, was a homemaker. Rivera recalled his parents as hard-working; they did the best they could to provide for their six children.

In June 1967 Rivera joined the U.S. Marine Corps and was a member of the Marine FLC Force LA. His goal was to help provide for his family and follow the steps of his father, who had fought in Europe during World War II.

After enlisting, he went to the Marine Corps Recruiting Depot in San Diego. As he started basic training, Rivera enrolled in scout sniper school, where he trained for three weeks. Rivera remembers training as a grueling process.

"It started out with about three squads of 21 men. After three days the crew was cut in half," Rivera said.

Upon completing training, Rivera was sent to Vietnam, where he says the days usually involved routine.

"Two squads always guarded the tower and the battalion, and then one group would rotate sleeping while the last group would do their daily routine," said Rivera. "Our job was to protect and, when we weren't doing that, we were out scouting the local areas."

Rivera was eager for the end of his tour, but three weeks before his scheduled return, a sergeant ordered him to go out to the battlefield.

"There's no way I'm going out there,” Rivera said he told him. “I have three weeks until I go home. I'm going to go out there and get killed."

When his time in Vietnam was up, Rivera returned home unharmed.

Rivera traveled to Barstow, California, for his discharge only to learn that his service documents had been lost. As a result, he was offered a variety of jobs to perform around the Marine base.

After working as a chaplain's assistant, Rivera was reassigned as a primary marksmanship instructor where he was in charge of training snipers. Rivera enjoyed the job and spent five months improving his shooting skills.

Rivera was discharged in April 1970 at the rank of sergeant and returned home to Tucson.

For most of his life, Rivera worked as a roofer for a variety of private contractors, and later for Davis-Monthan Air Force Base, where he retired in 2012. Rivera remained involved in the local detachment of the Marine Corps League, where he occupied several positions through the years.