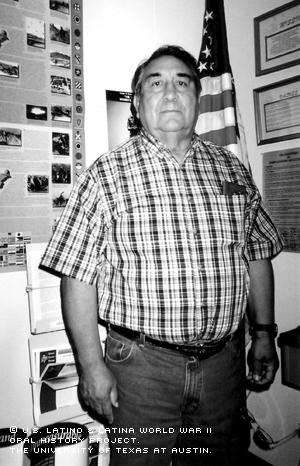 As a 17-year-old teenager, he had rarely traveled outside of the American Southwest. But as a soldier in the 99th Infantry Division, he found himself marching across European countries. Up to that time, he could only dream about visiting those foreign lands.

But WWII was no dream. If anything, the horrors of war proved to be a nightmare for Archuleta, nightmares that still haunt him to this day.

He’d enlisted in the Armed Forces in 1943 at the age of 16, wanting to enter the Navy. But during his physical examination in Albuquerque, N.M., Archuleta learned the Navy had met its quota and wouldn’t be taking any more men. He ended up in the Army, being sent to Europe in August of 1941.

"We were on the move from the day I hit the ground 'til the day I came back," Archuleta said.

He began fighting in France, battling his way to Belgium and Germany before the war ended.

Archuleta remembers getting off a train in northern France. "We were packed in there like sardines and we were freezing to death," he said. "I remember getting off. There were dead people all over the place. There were civilians. There were our soldiers. There were German soldiers."

Archuleta says he and the 99th Infantry fought through heavy fire almost every day he was there. His company was charged with the task of going building to building in each city, fighting for turf every step of the way, he says.

He was too young to appreciate religion when he went overseas, but that quickly changed when he got there.

"I learned to pray pretty damn fast," he said.

Archuleta says he befriended another Catholic, named William Baker. They began praying together every chance they got.

"At the time, we didn't know if that was going to be the last time we were going to pray," recalled Archuleta, who says they remained friends throughout the war.

Archuleta says he didn't make many other friends while overseas. Lots of men died in day-to-day combat action, so he didn’t want to get attached to anyone.

"You never knew if he was going to be there tomorrow or not," he said.

"We didn't have enough to eat. We didn't have any extra clothes. We were freezing at times. It was a very miserable time. You could go to sleep standing up," Archuleta recalled.

He considers himself lucky he survived. While many others were hurt and killed, he was never seriously wounded in combat.

"I had one little nick," said Archuleta, as he raised his sleeve to show the scar from a small piece of shrapnel that cut his arm. "I never went to the doctor. They put a Band-Aid on it and that was it."

Archuleta was in Germany when he was told the war was over. He remembers someone calling out names at his campsite one day.

"They lined up about 20 or 30 of us and said, 'You're going back to the United States,'" he said, recalling that his name was one of the ones called out.

But his celebrating was cut short when he realized that, since he he’d only been overseas for about six months, he was expected to be transferred to the South Pacific, where the war continued to rage against the Japanese.

Archuleta returned to the U.S. and was given tropical-weight uniforms to replace the winter clothing he wore in battle in Europe.

Three or four days before Archuleta was to report in San Francisco to be sent to Japan, he says he received news the war in the South Pacific had ended.

"I was getting a haircut and getting ready to go when all the bells and sirens cut loose. The war had ended in Japan," Archuleta recalled. "The guy didn't even finish cutting my hair."

Archuleta was discharged from the Army in June of 1946. He returned to Las Vegas, N.M., and attempted to go back to school.

He obtained his GED and pursued a degree in business administration at Highlands University.

"Some of these people used to laugh at me. A plane would go by or a [car would] backfire and I was jumpier than hell. I just couldn't cope and I couldn't study. I couldn't concentrate on what I was doing," he said.

After about 14 months, Archuleta dropped out of Highlands University and decided to work full time instead.

He says he had a hard time staying in one job for long. After school, he had many odd jobs, but none seemed to make him happy.

Archuleta says he didn't like being around crowds, and when he felt like he needed to be alone, he’d return to his father's ranch.

"I used to go out to the ranch and just walk around up in the hills and help my dad with the wood," he said.

After marrying the girl he’d been dating since before the war, Eva Maria Rains, Archuleta would return to his love of the outdoors and work for several years in the U.S. Forest Service.

During his time in the forest service, he traveled to many different states and held several different positions with the service.

Archuleta gave his wife most of the credit for raising their four sons while he moved around.