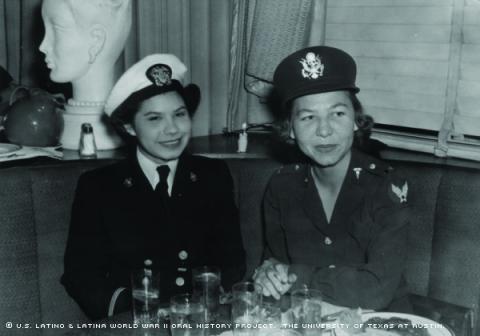 World War II gave Beatrice Amado Kissinger a ticket out of her small-town life in southern Arizona and into the big city adventure of serving as a Navy nurse in San Francisco.

When the United States entered the war, Kissinger was a nursing student at a Catholic school -- and tired of the discipline.

And she did just that: Six months after graduating on May 12, 1943, she enlisted in the Navy. Her life would change dramatically.

Kissinger's life before the war was quite humble. She was born Nov. 19, 1922, in Tucson, Ariz., the third of seven children and the oldest daughter. Her father, Ricardo Amado, worked as a welder for the Southern Pacific railroad and was also a professional boxer known as "Boilermaker Dick," who fought professionally in Arizona, California, and Mexico.

Before Kissinger started school, Ricardo was laid off from his railroad job as a result of the Great Depression, so the family moved to Patagonia, Ariz., where her paternal grandparents lived. Times were difficult for the family.

"It was hard, but we survived, all seven of us," said Kissinger, referring to the seven children in her family. "We had no doctors, no dentists, no clinics ... nothing."

In Patagonia, Beatrice began attending grammar school, where she faced a language barrier. Although her parents were both born in Arizona, they primarily spoke Spanish at home, though her father "spoke good English," Kissinger said.

At school, students were punished for speaking languages other than English, even at recess.

"I didn't like that discrimination," Kissinger said. "So I made a promise to myself that I would learn English and that I would speak it better than all of my peers, which I did."

After high school, she moved in with friends in Nogales, Ariz., and began to look for work. She says she didn’t have many skills and wasn’t familiar with Nogales, but managed to get a job selling men's hats at JC Penney, despite the fact that she knew nothing about men's hats or dealing with Mexican currency, which was used often in the border town. She was quickly fired.

"I never dealt with money because I never had any money," Kissinger said.

Despite her employment difficulties, Kissinger fondly remembers her time in Nogales.

"I was staying with these friends and we would go across the border," she said. "The mariachis! Sipping margaritas ..."

Kissinger says she and her friends spent their time "dancing and smoking cigarettes ‘til all hours of the night," causing her parents and her family doctor to became concerned about her lack of direction. They were afraid she was wasting her time and would turn to "no good," she says, so her doctor wrote the necessary letter of recommendation and gave her the required physical, and in 1941 she went to St. Mary's Hospital School of Nursing in Tucson. The program, which included room and board, was free to young women who agreed to work 48 hours per week. Shortly thereafter, the Japanese attacked Pearl Harbor.

"What I recall was that we had to turn the lights off, and that we had to put our shades down in the evening. There were to be no lights," said Kissinger, adding that "Davis-Monthan Air Force Base became quite active, and many servicemen appeared in the city."

As the war progressed, many of the registered nurses at St. Mary's would enlist in the military to serve in the war after graduation. Kissinger looked forward to the opportunity. After her enlistment in 1943, she was sent to the U.S. Naval Hospital in Long Beach, Calif., for six months. She then received orders to go overseas to the Pacific; however, those orders were reversed so she ended up serving in San Francisco during the war.

"I was doing the good work there, and they didn't need me overseas, otherwise they would have sent me. Personally, I didn't want to go," Kissinger said.

While in San Francisco, she didn’t miss small town life in Arizona. She recalls dating many of her patients and spending a great deal of time dancing to Big Band music. She got along well with her fellow nurses, although they came from varied backgrounds.

"The nurses came from every state of the union, and here we were thrown together," Kissinger said. "It was a beautiful experience."

After the war, Kissinger served at the Great Lakes Naval Hospital, just north of Chicago, Ill., where in 1946 she met Marine Sgt. Jim Kissinger, a patient from Chicago who was ill with scarlet fever.

It wasn’t love at first sight.

"He was a recalcitrant old Marine that didn't do anything I told him to," she said. "All he did was play cards with his old Navy chief in the solarium part of the ward."

At the end of Jim’s hospital stay, his Navy chief bet him he couldn’t get Kissinger to go on a date with him. She turned Jim down twice, but the third time he asked, she relented. On the date, Kissinger discovered Jim "wasn't such a bad guy," she said, and that they had many things in common.

"He was a guy who didn't put on airs," she said. "I met so many that were putting on airs."

After a seven-month engagement, the couple married in 1946 in Chicago. They lived in Chicago for three years, during which time their oldest children, Jim and Beverly, were born. Afterward, they moved to Nogales, and then to Tucson, where they lived for seven years and had four more children: Janet, Dorothy, John and Elizabeth. Jim was a "man of many hats,'' she says, selling insurance for Metropolitan Life for seven years, as well as working as a chemist for steel mills in Carnegie, Ill. Jim also worked as a computer data manager and even served as justice of the peace. He died in 1986 after a six-year battle with non-Hodgkin's lymphoma.

"He was a hard-drinking man, chain smoker, tough, very dedicated to his job. Very stressful job. He became ill with lymphoma," Kissinger said. "I don't know whether there's a correlation."

Kissinger says she’s now "enjoying life" in Tucson, where she’s taking a writing class at a local community college, which is helping her write her memoirs.

One of her sons, John, is the police chief in Nogales; Jim is a high school principal in San Bernardino, Calif.; Beverly teaches Head Start classes in Norwalk, Calif.; Janet is an elementary school teacher; Elizabeth earned a degree in communications; and Dorothy, who died in 1986, was a teacher.

Kissinger says she loves to read about many subjects, including religion, philosophy, history and autobiographies; is an avid fan of University of Arizona basketball; is active in her church and loves to cook. She looks back fondly on her years in the Navy.

"It was a beautiful experience," Kissinger said. "The best years of my life were those in the Navy."

Mrs. Kissinger was interviewed in Tucson, Arizona, on March 26, 2003, by Ernesto Portillo.