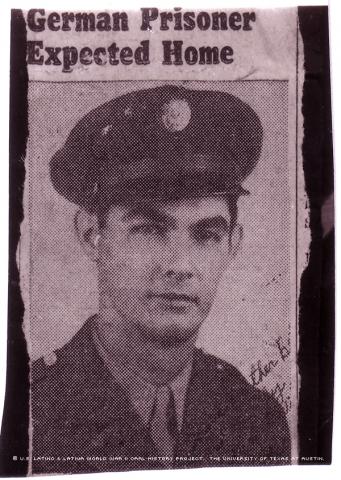 As the tower bells at the University of Texas at Austin rang "You're in the Army Now," Arnulfo “A.D.” Azios and fellow members of what was called the Enlisted Reserve Corps were called to duty. Judge Azios proudly recalls an article that ran on the front page of The Daily Texan, the university's student newspaper.

“Listed Reserve Core Called to Active Duty,” read the headline. "When we were called to active duty, only four names were mentioned [in the story] of more than a hundred men that were called. I was one of the four," he said. Fellow students knew of young Azios' panache for languages, and often utilized it on Thursday evenings in his apartment for last-minute polishing of the next day's essays. Those same language skills may have led to his survival after being captured by German troops during the Battle of the Bulge.

Azios was born in Laredo, Texas, in 1921, the youngest of six boys born to immigrant parents. His family spoke Spanish at home, so a command of the English language wasn’t demanded of him until he entered the first grade. By his second year of school, however, he says he was fluent in English. "Immersion is the best way to learn a language," Azios said. He remembers his childhood as a happy time, and talks about how his brothers, also World War II veterans, "helped make me a good man," as well as how “Laredo … was like Northern Mexico. … Everybody I knew spoke Spanish. [Even] the blonde kids spoke perfect Spanish.” After graduating from Martin High School in 1939, Azios worked for a local import-export company for three years before going to UT. It was during this period of his life when Pearl Harbor was attacked.

“Frankly, I didn’t know what Pearl Harbor was,” said Azios, recalling hearing about the incident on the radio.

Although he had no financial support beyond his own hard-earned dollars, Azios fondly recounts his college experience. "I did it the beautiful way. I worked my way through college because I had a strong desire to go," he said. But for the man who hitchhiked to Austin to pursue his dream of a college education, a call to serve put his love of learning on hold to make way for his love of country.

After the "You're in the Army Now" announcement, Azios once again hitchhiked toward his future. With 60 cents in his pocket, he enlisted in the Army in May of 1943. With no place to stay when he reached the military recruiting station in San Antonio, Texas, he boarded a bus for 10 cents and headed to Fort Sam Houston. He spent the night in the barracks and returned downtown to enlist the following morning.

Private Azios for the rigors of war. Because he scored high on an IQ test and was bilingual, he qualified to participate in a program that would allow him to learn German. "From September '43 to December '43, we went to the University of Nebraska to learn German. There was no certificate qualifying us as interpreters. They just sent us back to the regular Army; you returned to your fighting unit," Azios said. After his basic training, Azios was assigned to the 9th Armored Division. The Ninth Armored Infantry shipped out of New York on the Queen Mary in the summer of 1944.

“I saw the Statue of Liberty,” he recalled.

At the Battle of the Bulge in December of 1944, one of the war's most notorious battles, the 9th Armored Division was inundated with enemy fire. Injured by shrapnel, Azios found protection in a basement at 19 Grande Rue, Beaufort, Luxembourg, an address he says he’ll never forget. The approaching clicks of German boots signaled soldiers were close by. Unable to see due to his injury, he called out in German to the faceless enemy. This contact marked the beginning of his four months as a German prisoner of war.

As April approached, so did United States troops. Two hundred POWs, including Azios, were being marched away from Allied advances. "They were marching us to the left, away from the artillery fire," he said. "I was desperate, brave or stupid for thinking about escaping." But fear didn’t stop Azios from acting. "I asked a corporal, 'you wanna escape.' He agreed.

Unfortunately, the guy next to him heard and asked if he could go, too. If we said no, he would squeal because he was a squealer," Azios recalled.

Azios' plan was simple: The three men would sit down and tell the German guards they were resting. "'Come on, this is it,' I said,” Azios remembered, "and here comes the squealer with seven more guys he had invited and convinced to follow and join him."

Their German captors didn’t care that they took a break; Azios recalls them continuing to move on without them. "We didn't know that we were about a 100 yards from a long line of German machine guns. We were caught between Americans and Germans. It was one of the worst experiences of the whole war. Knowing what I know now, I wouldn't have escaped," Azios said. The soldiers continued their search for protection and found safety in a barn reminiscent of the Mexican haciendas familiar to Azios. An English soldier, who joined them that night, signaled the POWs’ liberation the next morning, April 13, 1945, crying, "The Yanks are here."

"From this point on, we were in American hands," Azios said. While at the farm after liberation, Azios was responsible for taking in 10 surrendering German soldiers as POWs. Afterward, he was made a corporal. The European war ended as Azios made his way across the Atlantic. He learned the fighting in the Pacific had ended while he was on a train bound for Fort Bliss in El Paso, Texas. And on Nov. 28, 1945, he was honorably discharged at the rank of Corporal.

Azios’ war efforts didn’t go unrecognized. He earned three Battle Stars, the Purple Heart, a Prisoner of War Medal and the Good Conduct Medal. Although he also was awarded the Combat Infantry Badge, he says he never received his Bronze Star.

Azios returned to UT and continued his pre-law studies.

“I was anxious to go back and reinvent my life,” he said.

And on August 23, 1947, he married fellow Laredo native Lauren Cuellar, who he started dating when he got back from the war. The couple has one son, Arnie, and two daughters, Norma Gloria Johnson and Diana Alicia Atchison, all of whom are UT graduates.

Azios now lives in Houston, having retired as a senior state district judge from the 232nd Criminal District Court in Harris County. When asked if he has any words of wisdom for America’s youth, he replied:

“[I]f you wanna enjoy the benefits of this great nation, you have to be part of it. … You cannot enjoy the fruits of anything unless you participate, unless you encourage other people to build up what we have, what has been given to us, given by virtue of the United States’ development.

“Nothing is given free. It’s offered and if you’re prepared, you’re gonna accept the gift, or the offer, or the privilege. Therefore, we have to start by being well prepared in school. … [D]on’t ever say I want to go to college but I don’t have money. … If you have a goal, at least try. Don’t give up without starting. The hardest part is the beginning. From then on, you find ways to accomplish your goal.”

When Azios hitchhiked from Laredo to Austin as a young man, he ended up toward the end of his journey at an all-night café in San Marcos, about 30 miles south of Austin. He sings the name of a popular tune he recalls playing in the café, “Te Quiero De Veras” (I truly love you).

“I heard that song a million times,” Azios said. “Now, every time I hear it … it transports me back to that night, which I can never forget.”

He recalls thumbing it on the side of the road that night in San Marcos until daybreak.

“It was hard, unpleasant, but did I complain, of course not. That was my choice. I was happy to be there,” Azios said. “As soon as day broke, I got a ride to Austin. And from then on, the rest is history.”

Mr. Azios was interviewed in Houston, Texas, on December 13, 2002, by Paul Zepeda and Ernest Eguia.