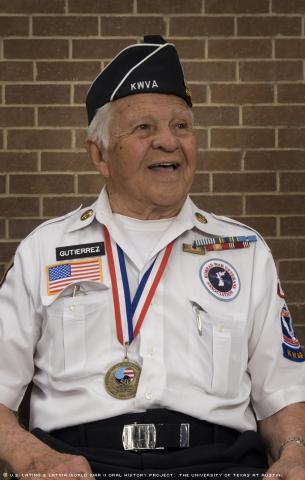 Most people reach a turning point in their lives at least once, and for Arnoldo D. Gutierrez that point was the time he spent in the Army during the Korean War.

He believes that he could not have gotten a better education than what he received by just being in the Army.

Gutierrez, who was 78 at the time of his interview, was a high school dropout. He said he used to enjoy his school life, playing a bass horn as a member of his school band. He left school at 15 because he had to take care of two of his siblings and find work after his mother died.

Gutierrez was born in 1932. His father died when Gutierrez was a 7-year-old. The absence of his father increased the financial burden on his family in the waning days of the Great Depression. However, he has beautiful memories of times in his earlier childhood that he enjoyed with his large family, which included seven brothers and five sisters.

When he turned 20, he received his draft letter. It was Dec. 19, 1952, a week before Christmas day and less than two years before the armistice of the Korean War, a three-year conflict that pitted United Nations forces, composed mostly of U.S. and South Korean military units, against the armed forces of North Korea and eventually China.

Gutierrez said the year and nine months he spent in the Army brought a lot of changes in his life.

“I feel that the military helped me not only serve the nation, but helped me improve what I got to be,” Gutierrez said proudly.

The Army offered him clothes, enough food and places to sleep. Gutierrez believes that to have served his country generally made his life better.

“If I hadn’t gotten married, I’d be back there again right away,” Gutierrez said with a smile.

Gutierrez said that, once he dropped out, he figured that would be the end of his schooling. He expected the rest of his life to be a fight for survival along with his remaining siblings, since his parents were gone. However, unexpectedly, the Army gave him a second education.

“We [soldiers in his unit] learned how to appreciate life,” Gutierrez said.

After basic training at Camp Chaffee, Ark., the Army ordered him to choose a school where he could develop more professional skills as a soldier. He decided to go to Wheeled Vehicle Mechanic School. There, he learned how to modify and assemble military vehicles.

Gutierrez said that in the Army he acquired mental maturity as well as physical skills. He said he learned about life through the process of harmonizing with 12 soldiers from different backgrounds and building a team.

Gutierrez remembers that his unit, the Korean Military Advisory Group, had a really warm and comfortable, family-like atmosphere. He said it was very fortunate for him to see that none of the soldiers in his unit died during the war.

“We were all brothers. There was no anger. It was just a family. It was a beautiful family,” Gutierrez said.

His experiences in the Army did not always remind him of good things, however. The battlefield he jumped into for the first time was too horrible to endure.

“When you get there, you are a man. You are not a child anymore,” Gutierrez recalls.

In his memory, the reason why soldiers had to fight in a strange land was simple. What soldiers, including him, hoped was only that the same situation did not occur in the place where their family was living. They were fighting against Communism in order to protect peace in their country and family.

“I didn’t want to see what I saw there,” Gutierrez said.

He recalled how extremely the war devastated one country and the lives of people living there. He saw that South Koreans were dying of hunger, lack of rudimentary protection against severe weather and diseases. He remembered Korean people hanging from the Army’s tanks and begging for chocolate and food. It was miserable to see that little children were starving to death and being injured by weapons.

The Korean War, which started June 25, 1950, after North Korea invaded South Korea, saw hostilities officially cease with the signing of an armistice in 1953 between the Communist countries and the United Nations. It is still not officially over, however, since a peace treaty has never been signed.

Gutierrez was discharged from the Army at Fort Bliss, Texas, in September 1954 at the rank of staff sergeant. But those 21 months of service also left psychological scars.

One day after his return, Gutierrez was sleeping with his older brother in the same bed. The next morning, his brother complained that he could not sleep at all because Gutierrez jumped high on the bed all night long. His psychological trauma from the war lasted a long time, he said.

Coming back to his hometown, Gutierrez decided to look for a job. Although the Army was supporting him, providing a small stipend for 26 weeks, he needed more stable work to continue a life with his wife. He spent three years in Chicago, working as a Mexican merchandise seller.

After that, Gutierrez worked as a furniture manufacturer and became a teacher, earning $8,000 a year at that time. That was an improvement over the life he thought he was going to have after dropping out of high school.

As he learned in the Army, Gutierrez taught his students not only physical skills, such as how to remanufacture a piece of furniture, but also life skills, such as leadership and survival techniques. Working as a teacher for 21 years, he tried to motivate his students and help them to lead a better life than he had.

It was a pleasure for him to see how his students grew up and what they achieved in society. He recalled that one student who he advised to go to college showed up after becoming a successful man driving an expensive car and working for a bank.

As a Latino veteran, Gutierrez said he didn’t experience any direct discrimination in the Army. He did not have any particular memories about Latinos in the Army, except for only one Latino soldier he met in Japan during the Korean War. But he emphasized that current education for Latinos needs to be transformed to be more engaging than it is now.

Arnoldo D. Gutierrez was interviewed on March 6, 2010 in Laredo, Texas, by Brenda Menchaca.