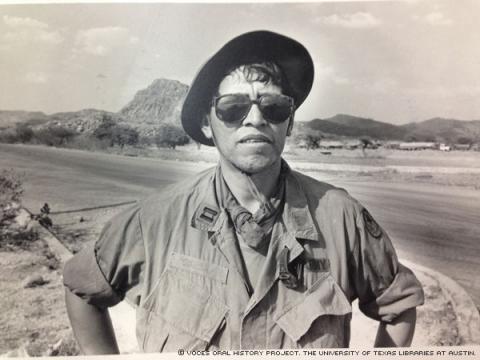 The West Texas native sat by himself in the barracks on base in Illesheim, West Germany, when a fellow soldier named Horton -- who never hid his disdain toward Garcia -- asked him to read a letter he received from his girlfriend. Horton, an illiterate, was eager to know the contents of the letter and the barracks were empty on pay day.

Though Garcia admitted wanting to make up a story, knowing that Horton would have had little choice but to believe him, he read the letter without deceit.

"I realized that I could've told him anything, and evil thoughts crossed my mind," Garcia said. "Since then, I have thought that never again in my life will I ever be as powerful as I was at that moment. I was the center of his universe."

Garcia's tour of duty in Germany during the Vietnam War, his epiphany with Horton and his many eye-opening service experiences reinforced two childhood principles that his father, Arnulfo Garcia, taught him: educational achievement and duty.

The younger Garcia was very proud of his Cold War service.

"I think, for all of [the Latinos], that was part of the experience, that we were carrying on that tradition," Garcia said. "It was a way of honoring our fathers. It means that I've fulfilled a citizen's obligation to the nation, that I was willing to defend it."

He said he had little regret.

"Things happen for a reason," Garcia said. "There's a reason that all of this happened. By and large, I'm grateful for it. It gave me a much broader perspective of the world and its people."

Garcia was drafted on Oct. 19, 1969, while enrolled at Angelo State University and working as a reporter for the San Angelo Standard-Times.

He thought he was bound for Vietnam. But, when he reported to Fort Lewis, Wash., he and 200-plus soldiers - mostly combat troops -- were diverted to West Germany. Garcia was assigned to Battery B, 6th Battalion, 20th Artillery, 5th Infantry Division (Mech.) at Fort Carson, Colo.

In West Germany, he performed a variety of jobs, including artillery crew member, motor pool clerk, and infantry squad member. Garcia said his experiences in Europe served as reminders of his humble beginnings and his Chicano roots.

"[Service] made me a better person, made me a more compassionate person," Garcia said. "It gave me a broader understanding of a lot of things."

Garcia's father stressed the importance of education to his children. The younger Garcia attended San Angelo's Sacred Heart Elementary School, a Catholic institution that turned out to be a "ticket to higher education," he said, recalling that the nuns instilled in him standards that would resonate throughout his life.

Garcia ended his active duty days at A Company, 2nd Battalion, 51st Infantry, 1st Armored Division. He was discharged in September 1971 at Fort Dix, N.J., with the final rank of sergeant. He received the National Defense Service Medal and a Good Conduct Medal for his tour of duty in Germany. He was also a recipient of the Army Service Award, Individual Achievement Award, Overseas Training Award, Legion of Merit Award and Outstanding Unit Citation Award, as a result of his service in the Texas National Guard, in which he served as a commissioned officer.

After Garcia got out of the service, he returned to San Angelo, Texas, after a brief stop in Cheyenne, Wyo., for the birth of his daughter. He resumed his college education and his job in San Angelo, before moving to Austin, Texas, in 1974. At the time of his interview he was the editorial page editor of the Austin American-Statesman.

Garcia shared his father's belief in education and sought to infuse that same value in future generations.

His advice for younger Latinos: "Don't swallow insults, take advantage of opportunities, get an education, and vote.

"The more education you get, the fewer insults you have to swallow," he said and added: "Don't be Horton."

Garcia and his wife, Vida Marcet, resided in Austin, Texas. From previous marriages, he had two children, Jennifer and Teodoro, who at the time of the interview was serving as a first lieutenant in the U.S. Army.

Mr. Garcia was interviewed by Jonathan Woo in Austin, Texas on April 23, 2011.