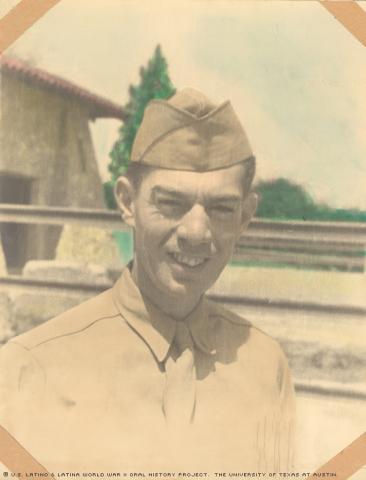 Arnold Feliu Garcia was born in San German, Puerto Rico, on Oct. 19, 1911, to Andres Garcia Lopez and Celia Feliu Servera. As a boy in Puerto Rico, he met and fell in love with Tomasita “Tommi” Ribas of Ponce. They soon parted, however, as he, his mother and three brothers; Benjamin, Gilbert and Isaac; followed their father’s work to Cuba, Tampa, Fla., and, finally, New York.

In New York, Garcia’s father, Andres Garcia, passed away in the late 1920s. Unbeknownst to the Garcias, however, the Ribas family, including mother Rosa and daughters Tomasita and Lenore, had moved to New York. In a surprising coincidence, the mothers, Celia and Rosa, met on the streets of New York City on April 28, 1939.

After Pearl Harbor, all four Garcia brothers enlisted in the Army. Arnold entered active duty on June 12, 1943, as an electrician. An avid photographer, he captured on film many aspects of his military life and collected much memorabilia, which he sent home to share with Tomasita. His photos and memorabilia were collected into a scrapbook the family holds dear.

Garcia served with the 141st Ordinance Base Automotive Maintenance Battalion; first in Jackson, Miss., and, finally, in New Guinea. He stopped off in Hollywood on his way to the Pacific, visiting attractions and USO clubs, and picking up photos and autographs of celebrities.

After victory, Staff Sergeant Garcia was transported back to the States aboard the USS General John Pope and discharged at Fort Dix in New Jersey on Feb. 1, 1946. He and Tomasita moved to Miami, Fla., following the rest of the family, who’d moved to a house overlooking the Orange Bowl.

Garcia became a father on Dec. 5, 1947, with the birth of his daughter, Rosa Lee Garcia. He lived in an all-female household with Rosa, Lenore, Tomasita and Rosa Lee.

Using his Army skills, he worked as an automotive adjuster at various insurance companies. He was ahead of his time in many ways, shooting some of the first 8-mm home movies. Also, he built and operated a HAM radio station with the call letters K4SEF, providing emergency communication networks during many hurricanes and other natural disasters in the United States, Central America and South America. As a member of the South Florida Orchid Society, he raised orchids that continue to give pleasure to this day.

Well known for his honesty and calm nature, Garcia passed away Dec. 22, 1976, in Maine at the age of 65. He’s survived by Rosa Lee, who resides in Tallahassee, Fla. As a Third Degree Master Mason of Miami Masonic Lodge, No. 247, he was