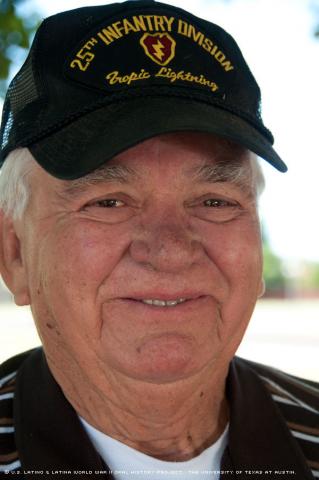 In August 1945, Armando O. Garcia and his family gathered around the radio and listened to the news: The United States had just dropped an atomic bomb on Japan.

Although the destruction took place far away, it was a significant event in the mind of an 8-year-old boy in the small Southwest Texas town of Marfa.

“It was awesome, and for a young boy’s mind it was too much to comprehend,” Garcia said. “I remember how we used to get around the radio and listen to the news during the Second [World] War, and it would scare the heck of out of a little boy like me.”

The use of atomic weapons wasn’t the only event that would greatly change Garcia. A life in the military and the civil rights movement would also transform his life.

“During the Second [World] War, I had two uncles in the military,” Garcia said. “They came [over before] they were going overseas, and they had all their combat gear with them. ... I was about six or seven years old, and that’s when I decided I wanted to be a soldier.”

Garcia’s dream to become a soldier was realized once he graduated from Marfa High School. He came from a poor family with no access to college funds, and so he had two options after high school: Enter the workforce and commit to a career of hard labor or join the military.

Garcia chose the latter, and he enlisted in the U.S. Army Reserves in March 1955, when he was 17. He was called to active duty in September 1956, and he served in Germany in 1956 and Hawaii in 1960. In the time between he served at Fort Hood, Texas, where he said he worked with ammunition and was ranked a sergeant.

In 1964, Garcia was shipped to Southeast Asia. But he was never stationed in Vietnam. He served in Thailand, Cambodia and Laos with several units, including the 2nd Armored Division and the 25th Infantry Division.

“We would see the firefights from across the Mekong River,” Garcia said, referring to the north-south waterway that divides Laos and Vietnam from Thailand and Cambodia. “Sometimes close to us we could hear the artillery. But as far as myself, being shot at and fixing bayonets or anything like that, I didn’t have to do that, and maybe that’s why I’m still here.”

Garcia was an aerial observer on a helicopter, helping plot enemy positions in the three countries neighboring Vietnam. He also served as a translator after taking a crash course in the Thai language before his deployment.

Although Garcia’s service did not require him to fight in combat areas, it did nothing to ease the tense feelings that he and his comrades shared.

“I wasn’t directly involved with combat, but I was right next to it,” Garcia said. “It’s scary. It’s very scary. If somebody tells you, ‘I wasn’t scared,’ he’s lying.”

Garcia, who was discharged in 1985 at the rank of staff sergeant, retains vivid memories from his time serving in Southeast Asia. “You grow up fast,” he added later, and “mature overnight.”

But his memories of the nation to which he returned are equally vivid. The civil rights movement was in full force while Garcia was serving overseas. However, the social and racial problems the movement addressed, he said, were not seen in the relationships he saw in the military.

“The Army had already been integrated, and in my platoon I had quite a few blacks, quite a few whites, and I had Latinos,” Garcia said. “We all behaved like grown men. We all took care of each other, and then we would see on TV all the problems they were having in the South, and that made us sad.”

Garcia says that he didn’t see discrimination in the military.

“Everyone was affected the same,” Garcia said in regards to his experience in Southeast Asia. “There was no Latinos, there was no blacks, there was no whites in the military. We all bleed red, and we all go through the same hardships together.”

After his discharge, he joined the American Legion, the Veterans of Foreign Wars and the Association of the U.S. Army. He worked in the insurance industry and got married.

The military, Garcia said, provided him opportunities he never would have seen as a civilian. But it also bolstered, he said, his opposition to racism.

And he would not trade anything for those experiences. “I’ll do it again if I could, if I got called to do it,” he said.