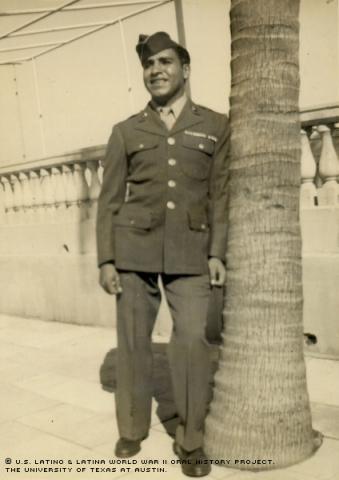 Dr. Armando Rodriguez knows what it's like to be oppressed, but with a strong will he rose to the top and is living a long, happy life. Immigrating to the U.S. from Mexico when he was six years old, growing up in a family of eight siblings and leading Latino organizations in high school that he said were deprived of opportunities given to white students were only a few of the obstacles Rodriguez had to overcome.

Andres Rodriguez, Armando's father, only achieved a third-grade reading level in Mexico, and the children's mother, Petra Cardenas, was illiterate. The four oldest siblings had attended school in Mexico and were all over age 21 when the Rodriguez family arrived in the U.S., so they all went to work instead of going to school.

In 1927, as immigrants in San Diego, all of the capable family members had to work at either the fish cannery or domestic jobs in order to support the household. They came to the U.S. because they hoped life here would be better economically and generate more opportunities for them than in Mexico.

The four youngest siblings went to school in San Diego, but Armando was the only one to graduate from high school. His younger brother, Carlos Rodriguez, ultimately finished high school after serving in the armed forces, and Catalina Farley, the sister closest to Armando, went to business school in order to become a business agent for the fish cannery workers’ union.

While growing up, Rodriguez participated in many activities of Guadalupe Catholic Church, located only 3 doors down from his house on Logan Avenue. Later on, when he was in his 20s, he started a Catholic Youth Organization in San Diego.

Andres felt out of place in the U.S., so in the 1930s he returned to Mexico for several years along with the four oldest siblings. Andres eventually returned to the U.S., but only to take the rest of the family back to Mexico shortly after Rodriguez’s graduation from San Diego High School in 1940. The four youngest children ended up convincing Andres to return to San Diego, however, and he remained there until he died in 1952.

"This, in essence, is where we grew up and we felt comfortable," Rodriguez said.

In high school, Rodriguez never had problems learning material or doing well in sports, but he had a few problems socially. He became a leader in several extracurricular organizations, including a Latino group. This group never got the same recognition, involvement and opportunities offered to them as the non-Latino organizations did, Rodriguez said.

"Because I am a natural protester and because I raise too many questions," Rodriguez said, "I was always being reprimanded for [speaking up], but that's the way I am."

The school was diverse; perhaps even half of the students were minorities, but none of the faculty or staff were of a minority race. Rodriguez conflicted with authority figures at the school, who he said held back his minority organization. This perceived oppression, however, gave him the drive that would last throughout his life.

"I was talking, looking and asking for the opportunities to be whatever others could be without looking like them," Rodriguez said. "And that's been my life."

Although Rodriguez faced this struggle, he thought the greatest opposition came from his own people, who told him it was O.K. to favor other organizations. He dealt with the same struggles after high school as well.

When Rodriguez graduated, he worked at the fish cannery because, based on his skin and hair color, working in stores or in an office was unthinkable. At this point in his life, he thought trying to get ahead was futile, so he waited and worked.

His wake up call came when he was serving as a Private First Class in the U.S. Army’s signal corps.

Rodriguez registered for the draft in the U.S. and intended to become a citizen. He was outside Guadalupe church on Sunday morning with three male friends when they heard the news about Pearl Harbor being bombed by the Japanese. The four of them went down to the bar, and while having a beer, verbally decided they would serve their country. Some of the area’s residents fled back to Mexico in order to escape the draft, but for Rodriguez, "It was not a difficult choice."

His father, being from Mexico, never said anything about the children's loyalty to the U.S., as he was respectful of others' rights, even in his own family.

In the signal corps, Rodriguez received the standard two weeks of basic training, but he also went to cryptography school at Fort George E. Mead in Maryland, where he learned to cipher and decipher codes.

While sitting in one of his classes, the Company Commander interrupted, announcing Rodriguez was handling classified materials but wasn’t a U.S. citizen. To keep himself out of trouble, the commander promptly drove Rodriguez to a federal court in Baltimore, where he became a U.S. citizen.

There were only two Latinos in the signal corps, but Rodriguez got along well with all of the soldiers because he was athletic and always playing sports with them. He said he never received a direct order from an officer not to speak Spanish, but many of the men who didn’t understand it didn’t like Rodriguez speaking it.

Stationed in Brazil during World War II, Rodriguez helped provide information needed to get planes over to North Africa and Europe safely. By then, machines did all the ciphering of codes, so Rodriguez managed a message center -- until he got malaria, that is. The sickness caused him to have asthma; thus, he was shipped home on a medical discharge in 1944.

Since the war wasn’t yet over, he worked at the recreation center in San Diego, as well as at the Neighborhood House, which offered services to the local community. He also began working the graveyard shift at the shipyards, since he’d learned to weld while in the hospital.

Upon his return home, Rodriguez organized an American Legion post in San Diego.

"I realized there was going to be a need to provide services to returning veterans," he said.

When fall came around, Jack Reese took over the Legion post because Rodriguez began attending San Diego State University. Since he’d served in the armed forces, Rodriguez received a full grant to pay for college, but lost the medical benefits when he began playing football at SDSU. As a student, he coached the wrestling team, which went undefeated for four years and also went to the Olympic trials. He graduated from SDSU in 1949 and started teaching at Memorial Junior High School in San Diego.

While at Memorial, Rodriguez founded an American GI Forum around the time Kennedy ran for office. As vice principal at Memorial in 1962, he ran for the assembly, winning the primaries, but losing in the general election. He was a delegate to the Democratic National Convention when President Johnson was nominated.

President Johnson then appointed him the first director of Mexican American Affairs, giving Rodriguez the opportunity to develop a bilingual program, among others. When President Nixon took office in 1970, he served as the assistant commissioner of education in the Office of Regional Office Coordination.

In 1978, Rodriguez went to East LA College to become the first Latino president of a college. He then served under Presidents Carter and Reagan, only to retire in 1983, having made many valuable contacts he attributes to his success in life.

"I've never lost those contacts in politics. Even as long as I've been away from Washington, now I can still go back and get into places that many people can't," Rodriguez said.

Always thinking he could’ve done more for society, he said he wants to leave the earth better than it was when he arrived.

"The legacy you leave," he said, "is what you were worth while you were here."

Along with his public life, Rodriguez has enjoyed his family life. He and his wife Beatriz have two children and four grandchildren. Realizing the needs of children to become successful learners from the day they enroll in kindergarten, he was prompted to work as an education consultant, in conjunction with the Hearst Corporation and the Bakersfield City School District, to help parents of preschool students prepare for learning.

His advice for future generations of America is this:

"Decide in life what you want to do and do it to the best of your ability; always accompanied by being happy ... and when you're happy, you make other people happy."

Mr. Rodriguez was interviewed in San Diego, California, on August 2, 2000, by Rene Zambrano. Mr. Rodriguez died on February 17, 2019 in his San Diego home from complications of a stroke. He was 97.