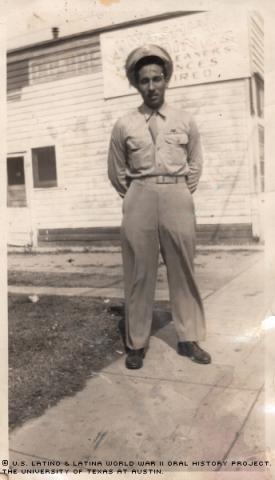 Lying in a cold stream with a bullet wound to his chest, Armando E. Gonzales felt his body getting weaker. Surrounded by the enemy in the Aleutian Islands, Gonzales had been shot by a sniper; he thought his life was over.

Gonzales dropped his rifle and rolled down a hill into a gully. He knew the sniper was still near, but he couldn’t give up the fight. With all the strength he had left, Gonzales forced himself to his feet and sprinted back up the hill, where he collapsed. His fellow soldiers quickly came to his aid, firing at the enemy while dragging Gonzales to safety. Three hours later, he was in the medic's tent; his first thoughts were to send a personal message to his wife, Soledad Seanez, so she wouldn’t be scared by a telegraph she might receive from the government. That was June of 1943.

More than half a century later, as he relived his experiences in an interview, his emotions ranged from despair to pride.

Gonzales is just one out of the estimated 350,000 Mexican Americans who served their country during World War II. He initially served in Company M of the 17th Infantry Regiment, 7th Infantry Division, and later, after recuperating from his wounds, was transferred to the 44th Infantry Division.

Raised in East Los Angeles, he recalls that from his street alone, more than 25 men fought in the war. History tells us many Mexican Americans volunteered to fight to prove they were really American. Gonzales was no exception, but he also had his future in mind.

Gonzales didn’t tell his family he joined the military until right before he left for basic training. After he learned they would have approved of his decision, he felt guilty for keeping the news from them. His parents wanted him to have opportunities they didn’t, and viewed the military as an avenue for his success.

Gonzales was inducted on Jan. 22, 1941. He was stationed in California when the Japanese bombed Pearl Harbor. Before being shipped off to the war, he came home to East L.A. and married the woman who’d been his pen pal while he was away from home.

After being shot, he was sent to Seattle and then to Vancouver, Wash., where he recovered in a hospital for six months. When it was decided he was able to fight again, Gonzales was shipped all around the U.S., from Louisiana to Boston, before sailing to Europe.

Most of his days consisted of taking villages and sleeping there for the night, often in foxholes, braving the cold weather.

"It was not a life, so it was not enjoyable," Gonzales said. "It was survival. You get used to misery inside and drink more when the day is over."

Gonzales was honorably discharged from the military on Oct. 11, 1945. He had earned numerous honors, among them the Purple Heart; a Bronze Star; Combat Infantry Badge with a star; and Asiatic Pacific Campaign, WWII Victory, American Defense Service and Good Conduct medals.

Gonzales sailed home on the USS Westpoint. Landing in Virginia, he boarded a train and arrived home five days later to surprise his family in Los Angeles. He vividly recalls walking with his wife five miles each way to see his family, because they didn’t have a car.

Although happy to be home, Gonzales couldn’t bring himself to talk about the war until recently because of another pressing matter: Although he’d helped conquer the enemy abroad, he had to first conquer the demons of alcoholism that befell him during the war.

"It was great to be home, and a lot of tears, and a lot of adjustment, and a lot of drinking. A lot of horrible drinking," Gonzales recalled. "Nowadays people get a lot of help after traumatic situations, but we didn't have that back then."

Gonzales found himself addicted to alcohol for several years after the war. He credits Soledad, who took him to meetings of an organization for recovering alcoholics, for saving his life and their marriage.

"My wife hung on. She saved her marriage," Gonzales said. "I learned a lot from her. There's not too many men that will admit that, but I say it with pride. She made me realize I could do things in my life and there was happiness to be had."

As he speaks of Soledad, his eyes tear up and he pauses between sentences as though picturing her in his mind. She passed away in 1992 from kidney failure when Gonzales was 72 years old. The year Soledad died would have been their 50th wedding anniversary. The couple had two children: Armando and Michael.

"She had a lot of spirit and then one day she was gone, and I missed her," said Gonzales softly. "When she went, I wanted to die."

Sadly, Gonzales again took comfort in alcohol to cope with his loss.

"Every night I would buy a 12-pack and a bottle of vodka and that would be my supper," Gonzales said. "I did that for about six months, then one day I started having hallucinations. I started to wake up and say my wife wouldn't want me to live this way."

Gonzales renewed his commitment to staying sober. Since that day, he has turned his life around. He believes his attitude toward life determines his happiness.

"I try to keep the positive things in life, and that's how I find the joy and happiness today. It's amazing."

Despite his positive outlook, however, Gonzales still had to overcome his inability to talk about his wartime experiences. He believes he could only until recently talk about the war because he’d blocked it out.

"Part of the war I held back was the killing part. I dwelled on ... the killing [that] had to be done. Either you kill or be killed," Gonzales said. "It's nothing to be ashamed of."

Today, Gonzales is comfortable sharing his story. He’s involved with Veterans of Foreign Wars, where he met his roommate, Margy. He also has been in a display honoring the WWII generation at Mount St. Mary's College in Los Angeles, Calif.

Assuredly, his most prized possession is a binder filled with telegraphs, pictures and medals from his military years. The binder's first page contains a poem titled "I Am Your Flag," symbolizing for Gonzales the strong patriotism flowing through his veins.

"When you get the goose pimples when they're playing the national anthem ... this grows into you," he said.

Gonzales now considers himself happy and secure with his life. Despite having fought a war when he was just past his teenage years, losing his wife and battling addiction to alcohol, his positive outlook keeps him going from day to day.

"We cannot sit back and say, ‘Well, this happened and we're going to dwell on that for the rest of our lives,’" Gonzales said. "That's not life."

Mr. Gonzales was interviewed in Los Angeles, California, on March 23, 2001, by Jennifer Kelleher.