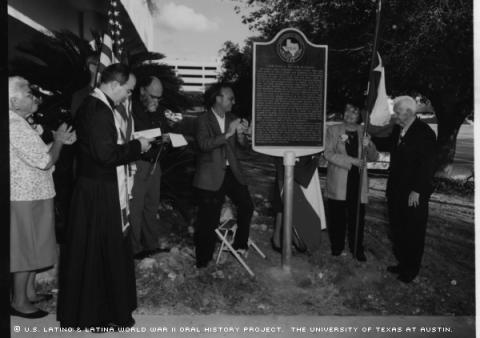 CORPUS CHRISTI, TX-On October 21, 2000, through the efforts of former alumni, a historical marker was erected on the south side of the Nueces County courthouse dedicated to the Cheston L. Heath Grammar School. The marker denoted one of the only segregated schools in Texas.

Founded in 1896, Miss Rose Dunne, a single Irish Catholic woman, was hired to teach the city's Mexican American students English and Academics in a yearlong experimental program. Miss Dunne spoke Spanish very well, and was President of the Mexican Parents-Teachers Association. In 1901, due to the programs success, the Corpus Christi school district erected a two story wooden structure located on the corner of Mestina and Artesian Streets. Formerly known as the Fourth Ward School, Rose Dunne-Shaw and the Parents Association asked that the building be renamed the Cheston L. Heath School in recognition of a generous benefactor, in 1917.

She continued her volunteer work amongst minorities, and stayed with the Cheston School from 1896 until her tenure as principal ended sometime after 1927. The historical marker currently stands on Lipan Street, across the road from another landmark dedicated to the foundation of the League of United Latin American Citizens, an organization founded in Corpus Christi in 1929.

Born in Mission, Texas, in 1921, Armando Flores was 8 going on 9, when his family moved to Corpus Christi in 1929. At this time, 99% of the students that attended the Cheston Heath Grammar School were Lopez, Gonzales, Garcia, and of other Latin surnames. A new building had been erected in 1927 to house the growing number of students. During the 1930's, the enrollment was so high that there were 400 students in the fourth grade alone. In 1935, Hispanics were streaming into the junior high in greater numbers than they had in years before.

"Because the school system was not prepared for that," Flores stated, "They were telling students that they better go back to the Hispanic school and repeat the 5th grade, because they didn't have room."

Flores grew up during the depression, and made it through the hard times by shining shoes on Leopard Street, selling newspapers, and doing odd jobs around town.

"Times were hard, but you could buy 20 hamburgers for a dollar, or 5 cents a piece. In fact, for 35 cents, we could have a party with a couple of girlfriends. It was really something, but money was that scarce," Flores stated during an interview at his Corpus Christi home. "Life was hard in the respect that there was work but the work paid nothing. A working man was working for 50 cents an hour; a man with a family was making maybe 8-9 dollars a week."

Before the family moved from Mission, Texas, Flores' father had been a horseman and a rancher. His father was born in 1864 and told stories about his rides on the Chisholm Trail, herding cattle and fighting off Indians on his way to Abilene, Kansas. In Corpus Christi, his father dealt in selling cabritos - goats - and worked construction. Flores' mother was a homemaker. Armando was the only male in the family born in the city, and when the Flores family moved to Corpus Christi, only two of Armando's brothers came also. They worked at butcher shops, while all four sisters worked also.

Food lines and relief existed because there were so many people unemployed. However, Flores' family always had something to eat. During the Depression, everyone was always busy contributing. Flores reasoned that if there were a lot of people at home, and everybody was doing something, it was not expensive to live. It was not the kind of lifestyle that exists in America today.

"It was well knit," he said. "Families worked together, and went to church together."

Flores described activities that he and his siblings took part in for fun. At the time, fish was plentiful in the bay, and there were no regulations or license requirements governing the sport. They went with little old hooks, some pieces of meat, and caught fish. On the way back from the pier, people would stop and buy the fish for a quarter.

"We were having fun, making money," he recalled. "We had a lot of fun around the bay, it was a fun place."

Shrimp shacks hired workers to behead shrimp for 10 cents a bucket. Flores stated that often, he would come home a little smelly, but that was one way to contribute to the family. There was no television, so radio programs such as Amos and Andy, Freebird Mcgee and Molly, and the Bob Hope Show delivered entertainment. From age 14 to 16, Flores and his friends worked at a soft drink bottling plant beginning at $3 a week and later earning $5. His last few years in high school, 1939-41, Flores made $12 a week, delivering telegrams for the Western Union Telegram Company as Messenger #30.

Just as the country was just coming out of the depression, Pearl Harbor was bombed on Dec 7, 1941. Flores remembers that day as he was riding his bicycle down Leopard Street, one of the main thorough fares, on his way to the Hill Crest neighborhood with a bunch of telegrams in his duffle bag.

He passed many friends in front of The Chat and Chew Restaurant, with whom he had graduated school in May of 1941, that were yelling that "'Now he could enlist.'" In those days, you had to be 21 to enter the service, but with the US entering the war everyone was supportive of the efforts, and got permission. Flores stayed in Corpus Christi for the holidays, then went into the service on January 15, 1942. He enlisted into the Army Air Corps wanted to be a machine gunner, like James Cagney in the movies.

"I didn't know that they were going to get us up so early in the morning. I weighed about 135-140lbs, and at 4 o'clock in the morning, Sgt. Jackson came in and picked up my cot, and flipped me like a pancake. I hit myself on the side, and I got mad I was thinking, 'Who the hell does this guy think he is?' Then I realized I was in the Army," Flores recalled.

His friend, Alfonso, who enlisted at the same time responded by saying, 'I tell you what, it's gonna be like this from now on.' They attended basic training at Sheppard Field, TX, during the winter months of 1942. Standing in the cold air, Flores had forgotten his jacket and was standing in his coveralls. The wind was blowing in from Oklahoma, and everyone was in line and huddled. The soldiers had their hands in thier pockets, and a lieutenant got on a platform and said 'American soldiers stand at attention, on a cold day or a hot day, they never keep their hands in their pockets.' The huddle snapped to attention.

Flores ended up in armament school at Lorey Field in Denver, Colorado. While waiting to take an exam for the gunnery school in Las Vegas, Flores became ill with rheumatic fever. He was unaware of his condition until one day he must have passed out in the ranks. He does not recall what happened but concluded that and they must have taken him to the hospital. He was diagnosed as a fellow with a bad case of rheumatic fever. Flores later learned that he was carrying a fever of 102 and 103 for who knows how long. At Fitzsimons Hospital at Lorey Field, Flores was discharged due to a heart defect caused by the fever. After 8 months of service, he was given a 10% disability pension, and sent home on October 3, 1942.

"Whatever the case, I didn't win the war. I had great expectations, many of my friends joined the navy and the army, and they would write to me, and it's just one of those things."

Upon his return, Flores became involved in the GI Forum. Veterans were returning from the war disabled, and had no means of medical attention. There were hundreds of veterans in South Texas who had no place to go, no insurance, and some of them couldn't work. The Veterans Administration appointed Dr. Hector Perez Garcia to care for these men, and the GI Forum was founded. Flores is a charter member of the organization.

Flores also became a member of the Disabled American Veterans because of his disability, and through that agency, got a job in a print shop. He learned the trade and was involved with offset printing. After 24 months of training, Flores became very proficient. From 1943-45, he used to deliver the printing from commercial shops to the county courthouse and on one occasion the county auditor asked him to take a look at a machine that no one knew how to operate.

Calvin Ramfield showed the printing plate, and Flores told him it was an off set machine, and that he knew how to operate it. On June 15, 1949, Flores started his career as an employee of Nueces County. He did all of the printing work for the county--warrants, citations, legal papers, letter size papers, envelopes, check-and eventually was saving the county a lot of money. His career at the county courthouse would span 51 years. He started as a printer, moved to court interpreter in 1951, and then in 1965, he became a Justice of the Peace.

Flores retired from public service in 2000. He is the last surviving member of his family. He was the youngest child, and is about to be 80 years old. Today he still attends meetings for the GI Forum, he pays dues, and states that he is "probably one of the oldest veterans around." He has watched Corpus Christi grow, there were only 35,000 people when he arrived, and now the population is well over 300,000. Three of his children graduated from the University of Texas at Austin and one is an alumnus of the University of Colorado.