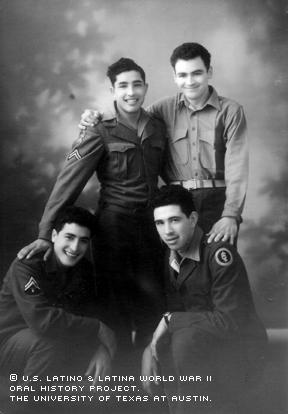 Despite the terror surrounding him on the mountainous Japanese island of Okinawa during World War II, Marine Cpl. Antonio Trujillo always found himself volunteering for missions that no one else wanted.

He’d been told repeatedly by fellow soldiers to hold back and not volunteer for dangerous assignments. But for Trujillo, volunteering was a matter of pride.

While in Okinawa; as a member of Fox Company, 2nd Battalion, 4th Regiment, 4th Marines of the 6th Marine Division; a fellow Marine advised Trujillo not to volunteer for anything. A few days later, the commanders of his unit needed someone to go out on a dangerous patrol mission.

"They wanted a volunteer to go into the rice fields," Trujillo said. "I remembered that the other Marine had told me not to volunteer. I had more pride in myself, so I did volunteer."

Trujillo says he "raised his hand" again a few days later when a volunteer was needed to move ammunition from one battle front to another in the hills of Okinawa. His unit captured Yae-Dake mountain in June of 1945.

He was relieved from duty briefly before volunteering yet again for a mission to go back out to the front. Armed with a flamethrower, Trujillo's assignment was to roust Japanese soldiers from their tunnels and caves.

Trujillo, 76, was born in Albuquerque, N.M., where he now resides. His parents were separated when he was 10 years old, and he lived with his mother. He worked jobs as a caddy at the Albuquerque Golf Course and local country club and tended to various tasks at his church to help his mother pay the rent. As a boy and, later, a Marine, Trujillo says he mostly kept to himself.

"I was always alone," he said, "I never kept with anybody. I just wasn't that way. And in the Marine Corps there was a lot of discrimination, so I never let anybody think that they were better than me. I carried my name, Antonio, and they didn't like that. The only friend I had was my M1."

He went through boot camp at Paris Island in South Carolina where, he says he encountered much discrimination. Basic training lasted for eight weeks, during which time he says he simultaneously learned how to be a good soldier and how to deal with prejudice. Angry over his treatment, he says he was determined to succeed.

"They really made a good Marine out of me," Trujillo recalled. "They hated themselves, hated Mexicans, hated Texas, hated Indians. So that was a game they played -- use words to make me mad and make you feel that you can [either] make it or not. And I made it."

After boot camp, Trujillo was sent to Cherry Point, N.C., to await deployment to the Asian Theater and to study weaponry. He and fellow soldiers rode in cattle trains to Cherry Port and boarded a ship that landed in Guam two weeks later. After brief reconnaissance training in Guam, he says the Sixth Marine Division boarded ships again, not knowing they were headed to the shores of Okinawa.

Trujillo says he "got lucky'' and was able to get into a landing craft to go ashore.

The 10th Army American landing force, which arrived at Okinawa in April of 1945 with Trujillo and his division, was comprised of 1,457 ships. This armada held about 430 warships, including aircraft, destroyers and battleships, containing half a million soldiers. The American forces were attempting to take possession of Okinawa to use it as a base from which to launch a ground invasion of Japan

As the American forces began clearing the island, they encountered fierce resistance from the Japanese. American soldiers entrenched themselves in foxholes and protected one another from suicidal Japanese attacks, Trujillo says. He recalls one night when a Japanese suicide squad attacked his unit:

"The nearest foxhole to ours was yards away -- too far to be of much comfort," he said. "The darkness seemed to isolate us like a heavy barrier from the rest of the platoon. We were careful not to talk or make the slightest noise that might give away our position, even though we were fully aware that the enemy knew exactly where we where.

"All we could do was wait. I tried to stay awake, but the strain of the day's activities wore on me, and I fell asleep, exhausted," Trujillo said. "The next thing I remember is waking up to the sputter of rifle fire and shouts of 'Banzai!' As my eyes tried to focus, a gray form leaped out of the shadows. There was a blinding flash, an ear-shattering explosion, and then I lost consciousness."

Trujillo survived this attack, waking from his daze with a dead Japanese soldier on top of him; a fellow soldier next to him was killed during the attack.

After Okinawa was secured by American forces, Trujillo volunteered for another assignment, this one in Guam.

Trujillo recalls Gen. Lemuel C. Shepherd, Jr. asking after the war ended for a volunteer to return to Guam.

"He needed a platoon for more security there, so I raised my hand," Trujillo said..

In 1946, Trujillo's unit was sent to the Japanese mainland to maintain security. In August of 1946, after two years in service, Trujillo returned home to New Mexico. He was awarded a Bronze Star, Presidential Unit Citation, Asiatic-Pacific Campaign Medal, Victory Medal and Navy Occupation Service Medal for his service during World War II.

Trujillo now suffers from post-traumatic stress disorder, which he says ruined his life because he suffers flashbacks from the horrible memories of the war.

His first wife, Stella Quiñones Trujillo, died giving birth to his third child in 1955; all three of his children from this marriage are also deceased. Trujillo has three other children -- Anthony, Joseph, and Cecilia -- born by his second wife, Maria Cisneros Trujillo.

Trujillo says his children are his life.

Mr. Trujillo was interviewed in Albuquerque, New Mexico, on November 2, 2002, by Iliana Limón.