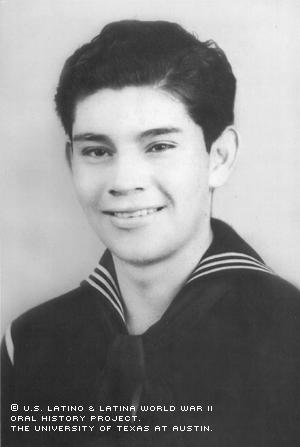 If it wasn't for ice cream, Antonio Rico's experience in the Navy during World War II might have been even more tedious. Stationed in Guam in 1945, Rico remembers the long hours pulling guard duty on the island.

"Ice cream saved my life," Rico joked. "It was a lonely time, but the best part was that we could have all the ice cream we wanted."

Rico had enlisted in December of 1941, shortly after Pearl Harbor was attacked by the Japanese. Because his eyesight was poor, Rico says he was assigned to the 128th Naval Construction Battalion (Seabees), which was responsible for providing infrastructure support for troops, including building roads and setting up military camps.

He recalls one campaign during which American forces were going to invade a Philippine island. A list of names of the men who were to take part in the invasion had been posted on a board, but Rico says he couldn't find his name. Upon questioning his officer about the omission, he says he was told he wasn’t allowed to participate in the invasion because he wore glasses to compensate for his poor eyesight.

"In the end, that's what could have saved my life, because many men were [killed]," Rico said.

Born Sept. 7, 1924, in the small town of Mexia, Texas, Rico learned early on that life wasn’t going to be easy. For one thing, his family was the only Mexican American one in Mexia. He says he excelled in sports, but recalls Anglo students resenting his athletic popularity and Mexican ancestry.

"I remember a few white kids who used to call me a greaser, but I knew they didn't know what it meant; they probably heard it from their parents," Rico said.

One of his teachers tried to explain to his classmates that Mexican Americans were the same as anyone.

"I will never forget her," Rico said, "She took interest in correcting my words, helped me with my pronunciation and was there for me when I needed to talk."

His family survived the Depression, even though they didn’t earn much money, said Rico, adding that his father, a laborer, and mother, a housewife, provided as best they could for him and his five brothers and three sisters.

Rico remembers making his decision to enter the military shortly after Pearl Harbor was bombed in 1941. His brother, Nick, had already joined the Army Air Corps. While serving in Alaska, Nick was killed in a truck accident.

Afraid of being drafted by the Army, Rico enlisted in the Navy. Assigned to Camp Perry in Virginia for basic training, he said goodbye in 1943 to his parents, Antonio Rico and Mary Vargas Rico. He says his training instructors were tough, but, fortunately, he was physically fit.

"Playing sports in high school helped me to endure the running," Rico said, "You would get a second wind and it felt like you just started running."

After boot camp and being assigned to the Seabees, Rico was transferred to Newfoundland, where he was assigned to provide service and support for ships coming in from Europe for fresh water supplies.

After his stay in Newfoundland, Rico was transferred to Guam in the South Pacific, where he earned his second stripe as "corporal of the guard." While with the Seabees, he was trained in building pontoon bridges and laying down airfield strips, living quarters and other types of buildings.

When recalling other Mexican Americans who served in the Navy with him, Rico remembers some seeming as if they were part of their own "clique." These Latinos usually stayed to themselves, like they were their own gang, Rico says.

"They would call you names because you were hanging around with the white soldiers," he said. "I enjoyed my friends, and I accepted friends at face value."

Rico was in Guam when the U.S. dropped atomic bombs on Hiroshima and Nagasaki and the Japanese surrendered. He says the troops celebrated like it was the Fourth of July, and recalls hearing the sound of ships blowing their horns and shooting flares; soldiers were ripping off their uniforms because the war had ended.

Rico was discharged March 5, 1946, at the rank of Coxsman. Upon his return to Houston, he resumed his job at a warehouse facility he’d worked at prior to his enlistment. Shortly afterward, he met his wife, Ernestine Del Toro.

That same year, Rico became interested in the League of United Latin American Citizens (LULAC), and participated in the early organization of a local unit. Although he says he wasn’t very political, he recalls working for LULAC because the organization opened doors for Hispanics of all walks of life.

Rico eventually became president of LULAC's Houston chapter in 1963. He was honored and cited for his dedication and service to the organization.

He recalls that at one dedication ceremony attended by the late President John F. Kennedy, "I was thrilled to hear Jacqueline Kennedy speak to us in Spanish," Rico said.

Rico retired from Gorman's Uniform Rentals at the age of 65; he lived in Houston at the time of his interview.