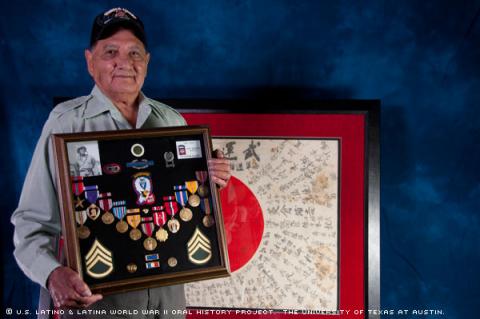 Looking back on his childhood, Anthony D. Lopez chuckled to himself and said, “Yeah, I was a runaround kid.” Maybe it was all that running around that got him through years of combat leading up to the liberation of the Philippines during World War II.

In an interview in Denver, his hometown, Lopez described how his adventurous streak in his childhood became one of his strengths while he fought for his country. He re-enlisted twice while in the 82nd Airborne Division, and he later served in the U.S. Army Reserves until 1950.

The decorated veteran engaged in heavy fighting while in the 503rd Parachute Infantry Regiment, with which he served at New Guinea, Leyte, Mindoro, Corregidor, where he was wounded, and Negros.

The heat of combat and the islands of the Pacific were nothing like his boyhood home. As children, Lopez and his friends would ride their bikes to Morrison, Colo., just outside Denver, to hang out at Red Rocks, a park and amphitheater. When he was older, Mary Louise Jimenez, his high school sweetheart and future wife, accompanied him. They drove there in his sometimes-untrustworthy Model T Ford truck.

“Sometimes I used to make her push the truck while I popped the clutch,” Lopez laughed, recalling the times his truck stalled on dates with Jimenez.

But not all of his childhood was fun and games. Like many others during the 1930’s and 40’s, Lopez’s family struggled economically.

“Since I was always running around barefoot, my mother used to get me free shoes from the school down the street,” Lopez said.

Lopez also remembers taking a job at the local grocery store stocking produce when he was about 12 years old and waiting in line with his family for free bread.

Without a father in the picture, Lopez’s mother, Loretta Rita Villegas, juggled two jobs, one as a seamstress at a Bailey’s Jeans factory and another as a cook and tortilla maker at Mexico City Restaurant, to provide for her five kids.

Lopez is the youngest of five brothers. The older three have passed away.

Although Lopez’s mother didn’t speak English, she encouraged her son to learn the language in elementary school when he attended Sacred Heart Catholic School.

For Lopez, Catholic school brings back more than memories of learning English.

“It was very strict,” Lopez said of his school. “One time I remember a teacher coming toward me with a ruler, and I didn’t know what I did wrong, so when she told me to hold out my hands and she’d pull out the ruler, I kept pulling them back, and I was told I couldn’t come back.”

After being expelled from Catholic school, Lopez attended a local public elementary school and then a junior high school. Lopez has fond memories of his days at Manual High School, though.

“I had really good teachers,” Lopez said. When asked if he ever experienced any discrimination as Latino, Lopez said that he hadn’t.

“Everyone was pretty much treated the same,” Lopez said. “The school was about a third Latino.” The other two thirds of the school’s population were African-American and Anglo.

Of all of the high school teachers, Lopez enjoyed his woodwork teacher the most. At the time of the interview, Lopez had in his home two end tables that he made himself.

In high school, Lopez played baseball and “a little football.” Lopez said he only played football for a short while because he was so small compared to the other guys on the team. The way he viewed his size as weakness in football quickly diminished when Lopez headed off to the Army.

In April of 1943, after graduating from high school, Lopez enlisted in the military.

Though he was the only one of his mother’s five children to go to the Army, Lopez doesn’t remember her or his then-girlfriend, Jimenez, being surprised at his choice to enlist.

“At that time it was expected,” Lopez said. “Men were either getting drafted or enlisting, volunteering to go.”

But he recalls his girlfriend’s anxiety. “She had the idea though that if you went to the Army, you didn’t come back,” Lopez said.

After his enlistment, Lopez was sent to basic training at Fort Roberts in California, which Lopez described as “in the middle of the Mojave Desert.”

“I ran around so much as a kid, outdoors, [that] I carried that with me to training,” Lopez said.

Though his training days there were long and hot, Lopez felt that his leaders were doing a good job of preparing him for combat and war. However, when an airborne representative came to his camp promoting $50 extra dollars for soldiers who wanted to be paratroopers, Lopez jumped at the chance.

After two months in training, Lopez was sent to Fort Benning, Ga., for paratrooper training. By September 1943, he was in Australia with his unit, Co. F, 2nd Battalion, 503rd Parachute Infantry Regiment, where he excelled. He often ranked first in contests and drills, including battalion and bayonet drills.

“I found that the white boys were a little weak,” Lopez laughed. “So they looked up to me, and I helped them.”

In July 1944, Lopez and his regiment were sent to New Guinea to prepare for the 503rd’s second combat jump, the first for Lopez. They landed on Noemfoor Island. It was there, “on the third or fourth of July 1944, [that] we came in contact with the enemy,” Lopez said.

This was just the first of a series of encounters with the enemy for Lopez as he and his platoon crawled through the caves of coral. He still remembers the crunching sound the coral made as he stepped on it. According a history written by Lopez, after fighting on Noemfoor, the regiment, “joined by the 462nd Field Artillery and the 161st Combat Engineers, became the Parachute Regimental Combat Team known as ‘Three Winds of Death.’ ”

Lopez saw more combat on Leyte and Mindoro before moving on to a risky, bloody airborne assault on Corregidor. Lopez especially remembers Corregidor because that’s where he was shot. While carrying a stretcher in an attempt to rescue another soldier, Lopez was shot on the side of his abdomen, and the wound became infected. He was hospitalized and was soon eager to get back into the fight. After two weeks in recovery, he got his wish.

When Lopez received the Purple Heart, he looked at his commander and asked, “What for? I’m just doing what everyone else is doing.”

Lopez served in the Army from 1943 to 1945. His unit was fighting in Negros, in the Philippines, when the war ended. Lopez wrote later that “even after the war officially ended the 503 was in daily contact with the enemy.” When they learned of the surrender, “the Japanese began coming out of the jungles with white flags.”

Lopez said the regiment was disbanded, and some were sent to Japan with the 11th Airborne Division. “Old men such as myself at the age of 21 came home.” He was back by Dec. 22, 1945. Lopez said that there was no special homecoming for him. He slipped back into everyday life and looked for a job right away. After unsuccessful interviews with the police department, he worked in coal mining and construction. He finally settled for a job at grocery store, which he said was ultimately a good thing because it helped provide for his family. “I was able to get free fruit and vegetables for my family and my mom and wife’s mom,” he added later.

“I finally took a course in transmissions and opened my own … shop,” Lopez recalled. He ran the shop until he retired, he said later. “It was a good choice.”

Lopez’s daughter, Yolanda, served as a Denver police officer. His two sons, Tom and Steve, followed in their father’s footsteps by serving in the military. Tom served in Vietnam with the 101st Airborne Division. Steve taught martial arts at Fort Leonard Wood in Missouri. Lopez feels that every man should serve at least one term in the military to build character, and their decisions to serve made him proud. “I take pride knowing we did a good job with our kids,” Lopez said later.

Lopez has remained active in some veterans’ organizations, including the American G.I. Forum and the Disabled American Veterans, and he helps plan reunions for members of the 503rd and their families.

He also visits schools as a speaker to discuss his wartime service and the horrific realities of war. He doesn’t carry his numerous decorations, including his Purple Heart, Bronze Star and Good Conduct medals, but he does offer a piece of advice for the students.

No matter what the occupation, “just go in there, and do your job, and do the best you can,” he said.