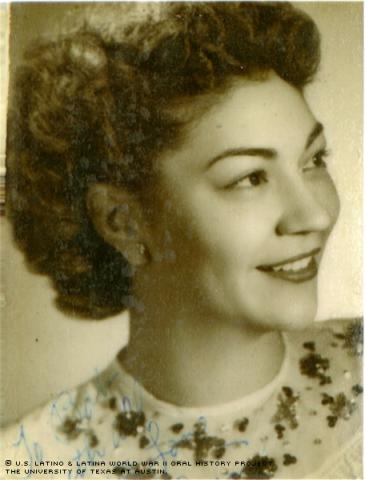 Unlike many other Latino World War II veterans who often found themselves in a minority during their military service, Roberto Vazquez says he seldom felt the brunt of discrimination as a soldier in his division, where he was one of 7,000 Hispanics fighting shoulder to shoulder against the German army.

Vazquez was born in Laredo, Texas, on August 1, 1923. From the beginning, he was made to feel at ease with his culture. Located on the Texas-Mexico border about 160 miles south of San Antonio, Laredo was unique. In the 1930s, the sheriff and most of the local police department, as well as the mayor and a number of teachers, were all Latino.

Vazquez says he seldom experienced any racial discrimination during his childhood because of the town's proximity to Mexico. He was active in his community as a youth, participating in many volunteer activities.

He says his most significant volunteer effort came when he was 16 years old.

"I was playing football in St. Joseph's Academy, and then all of a sudden all of the football players took off” to enlist in the military for World War II, Vazquez said. "I had to beg my father to sign a paper so that I could join the service then, at 16."

Vazquez was sent to Fort Sam Houston in San Antonio for basic training. He then was dispatched to Wisconsin for ski training.

"They trained us for jungle warfare and then turned around and sent us up north for ski training," he said.

As a member of the 2nd Infantry Division, Vazquez was one of about 7,000 Mexican Americans who made up half the division. He says a number of Hispanic officers made him feel emboldened as a Latino soldier.

His division was sent to Normandy, France, Germany and, later, Czechoslovakia. One of his most vivid memories was storming the beaches of Normandy during D-Day Plus One in 1944.

"In Normandy, we wanted to get off the boat because we were afraid that they would sink our boat. We wanted to get on that beach. We started praying and felt lots better on the beach than we did in the water." Vazquez said.

For him, religion played an imperative part in survival.

"I did a lot of praying, especially when the artillery started coming in. We would hit the ground praying," Vazquez said.

He says his relationship with his fellow soldiers eased the trauma and distress he experienced throughout the war.

"We acted like brothers," Vazquez said. "Once we got into battle, we had no differences; we just protected each other."

After the war, Vazquez received an honorable discharge in addition to numerous awards. "I was honored with the Ruptured Duck, the Good Conduct medal, the European Theater award, plus our division received 5 campaign stars." he said.

The Ruptured Duck is a cloth insignia that was issued to service personnel who were about to leave the military with an honorable discharge.

After the war, Vazquez moved to Chicago.

"I came because friends said that there was a lot of work up here," said Vazquez, who first worked at Endless Steel, a steel mine, and later at LTV steel mill, where he was a mechanical and electrical supervisor for 34 years.

He met his wife, Anna Torres Vazquez, in East Chicago, Ind., where they reside today. They have three sons: David, Arturo and Richard. Anna was a WAC during the war, serving as a trainer with the 3rd Air Force, which was based in Florida.

Today, Anna is unable to speak and is mostly confined to her bed because of a series of strokes in recent years.

"She can't speak very well," Vazquez said. "I am answering a lot of questions for her, but she can think better than I can."

Anna was born in Mexico but raised in Indiana. She was the only Latino female to join the WWII effort from her neighborhood. As a member of the 3rd Air Force, she was sent to Florida to train allied pilots in the 201st Mexican Fighter Squadron to fight in the South Pacific.

"They held her here [Florida] because they were training all those allied pilots," Vazquez said. "They didn't want to let her go."

Family members recall that during a training mission, Anna's plane made a forced landing and was reported missing in action. She and her crew survived the incident.

After the war, Vazquez says he experienced many of the racial inequalities he hadn’t encountered in South Texas and during the war.

"We came out of the service, and they used to seat us in a separate colored section in the theaters," he said. "Here we were out of the war with a bunch of medals, and we had to sit on the side. So we got involved in politics and changed a lot of things."

The couple started their activist involvement in 1948 when they joined the League of United Latin American Citizens, or LULAC, one of the largest and oldest Hispanic organizations in the U.S. LULAC embodies a philosophy in which the Vazquezes say they believe, that the will of a people can overcome inequalities of discrimination and injustice and people can enjoy their rights as U.S. citizens.

The Vazquezes organized a men and women's council in East Chicago. Also, Vazquez was the pioneer president of LULAC in East Chicago. He later became 2nd National Vice-President, and Anna became the 1st State President in the Midwest.

Together, they attended 39 consecutive LULAC national conventions all over the U.S.

Awards and plaques cover the walls of their home as symbols of all their hard work. Among the photos hanging on their walls are ones of their three sons, seven grandchildren and 10 great-grandchildren. Through war, discrimination and sickness, the couple has remained partners and set a legacy for themselves and others in East Chicago and beyond.

"As we say in Spanish, Vaya con Dios, to our culture and to nuestra gente," Vazquez said.

Mr. and Mrs. Vazquez were interviewed in East Chicago, Indiana, on June 20, 2002, by William Luna.