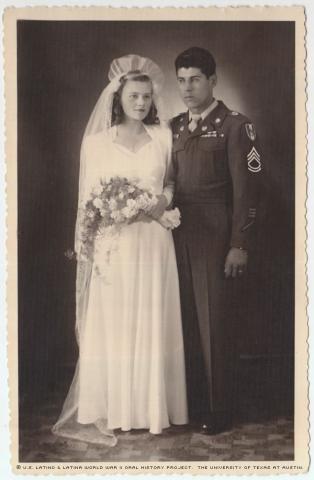 Growing up in Austria, Angela Vela had a front-row seat to the effects Hitler and World War II had on Europe. But in a time when fear and turmoil plagued the country, Vela was fortunate enough to find something very different – love.

Born Angela Haager, Vela was only eight years old when Hitler took over Austria in 1938. Two years later, her oldest brother was drafted to serve in the German army for the war. And in 1944, he was killed in Romania on the Russian front. From food being rationed to Americans bombing her hometown 15 times, Vela says this was the period when everything changed.

She recalls experiencing her first real shock of the Holocaust in 1943. One day when she was on her way home from shopping, she saw Nazi soldiers marching Jewish prisoners from one concentration camp to another. Vela described the captives as “walking skeletons,” all without hair and all wearing black and white uniforms. Once the prisoners saw she had food in her bag, they began to surround her. Vela says she took some of her rationed bread, threw it on the ground and all the captives went after it.

“The guards came and they had big clubs and told me that if I did that again, I’d be going with them,” Vela said. “So I saw Holocaust, not the real bad, bad things, but enough to know it was true.”

While some Austrians agreed with Hitler’s policies at the time, Vela says her father, Friedrich Haager, didn’t, and that he always pushed his children to question what they were learning at school, where Hitler’s policies were portrayed in a positive light. In fact, she recalls her father espousing a completely opposite view from Hitler and everything he stood for.

“Hitler’s mission was to control the world by fear, intimidation & lies,” wrote Vela after her interview, explaining how her father’s teachings at home contradicted what she learned in class.

Because of his beliefs, Vela says her father was under constant surveillance, leaving the family in perpetual terror until the Americans liberated Austria in 1945.

“The fear that you live from day to day, the fear of my father being hauled off to a concentration camp … Not because he was Jewish, but because he did not have the same political view as the Germans would like for him to have,” Vela said. “That fear was gone; the Americans were our liberators. When the tanks started rolling in, we knew they were our liberators and it was exciting.”

Her family’s fears being lifted isn’t the only reason Vela is thankful for the Americans having come to Austria – this was also the way she met her Mexican-American husband.

Vela explains that while American soldiers were in Austria, they’d frequently ask the women of families to wash their uniforms. Her mother, Angela Aver, often washed one of the soldier’s uniforms and Vela quickly became friends with him.

Once the GI received word he was going to be transferred, however, the two devised a plan to stay in touch: He would write a letter to a sergeant who was staying in town, and have that sergeant leave the letter for Vela inside a library.

But before the soldier left, he wanted to introduce Vela to the sergeant who’d be helping them.

“We were sitting there, right outside the library, and up comes this sergeant – helmet on, all shiny, boots shining … I said, ‘Whoa!’” Vela recalled. “And well, it happened to be Abel Vela.”

Vela recalls the day Abel stopped her to tell her she had a letter and to pick it up that evening.

“Well, I got there and Abel was there, but there was no letter there,” Vela said. “Long story short, I never got a letter. Well, I didn’t know if I got a letter or not, but Abel started talking to my family … and well, eventually we were married. I was 18.”

Vela and Abel eventually would have to leave Austria and come to America. While Vela had her own idea of what America would be like, her first impression of the United States wasn’t a good one. When the two first arrived in New York, she saw signs above the bathroom doors reading “White” and “Colored.”

“What do they do in there, color?” Vela asked her husband.

When Abel told her what the signs were for, Vela felt her heart “practically sink.”

“It went from my heart to my feet. It seems like it just knocked out the wind, the pride, of everything that I thought about America,” Vela said. “It immediately reminded me of Hitler.”

Since Vela already knew English, she thought the transition from Austria to America would be an easy one. However, she arrived in Texas only to find out that part of Abel’s family didn’t speak a word of English. Vela then had to begin learning Spanish. Nonetheless, she says she felt at home with Abel’s family.

“To me, I just fitted into his family. Even though I didn’t know how to speak Spanish at first, somehow Abel was raised the same way I was raised, with the same values and morals,” Vela said.

Married for 60 years at the time of her interview, she and Abel had five children, 15 grandchildren and 18 great-grandchildren.

Once her children grew up, Vela says they asked Abel a question, to which even she didn’t know the answer: “Ok Dad, can we please know – was there a letter or was there not a letter?”