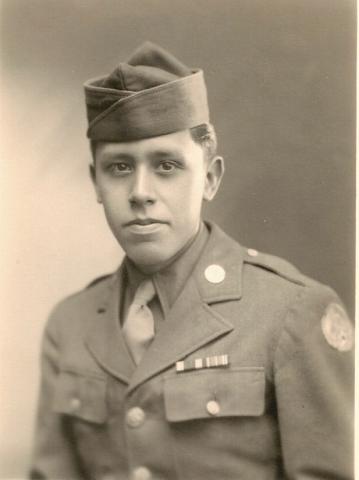 Between April 1944 and December 1945, Angel Zavala experienced everything from seeing the architecture of England and the islands of the South Pacific to nightly bombings and a searing sun at sea.

What was a 22-year-old from Coupland, Texas, who enjoyed softball and the song “Las Cuatro Milpas,” doing half a world away from home?

When Zavala was drafted Jan. 20, 1943, he reported to Fort Sam Houston in San Antonio, and from there a whirlwind of travel kicked in. He completed basic training at Keesler Army Airfield in Biloxi, Miss., got transferred to South Dakota for radio-operator training, moved to Denver, Colo., and then relocated to Salt Lake City, Utah.

“It was something new for us,” said Zavala of his training days. “We had never lived a life like that before.”

In 1944, Zavala was ordered to report to the European Theater of Operations. As part of the Army Air Corps, he was assigned to the 845th Bombardment Squadron of the 489th Bomb Group.

Zavala worked in communications as a radio operator. He and his colleagues would receive orders about attack plans, which were passed on to squadron commanders to use in mission briefings, as well as radioed to planes already in the air.

Zavala dealt with the technology of the time, including radio and telegraph equipment. He learned to use Morse code and cryptography.

Zavala’s squadron was part of the main forces dropping bombs before the infantry hit the beaches. Due to the mission’s success, he said he was allowed to return to the United States for a 30-day leave after only six months in Europe.

While back home, Zavala married Guadalupe Rincon, who was also from Taylor, Texas, and who had been acquainted with Zavala and his family for years.

What he did not know at the time, however, was that he would be sent to the South Pacific to fight in the war against the Japanese. The new Mrs. Rincon-Zavala was soon left behind with countless other friends, wives and other relations, all hoping to see their loved ones again.

“They were united, they were all praying because almost everybody had somebody in the service back in those days,” said Zavala, who was sent to the South Pacific for five or six months.

In August of 1945, Zavala was heading on the USS Pondera toward Okinawa when something huge happened:

“They announced on the radio loudspeaker that they had bombed, you know, the Hiroshima . . . Then, three days later, they dropped the other bomb in Nagasaki, and that’s when we learned they had ended the war,” Zavala said.

After nearly three years of serving his country, Zavala was coming home.

His squadron was taken to Guam and then back to the U.S. mainland. After landing in California, he was discharged Dec. 3, 1945, at the rank of Tech 5th Class.

Finally reunited with the loved ones who he had only been able to contact through letters, which had arrived few and far between, Zavala and Guadalupe started their family in Taylor, about eight miles from Coupland. They had two sons and seven daughters, not to mention a “good group of grandchildren” later on, to keep them busy.

Zavala was born May 20, 1922, into a fairly large family. His parents, Zeferino Zavala and Monica Almendarez Zavala, had moved from Mexico to the United States in the early 1900s. They raised their five sons and three daughters in Coupland, a farming community northeast of Austin.

Zavala’s father died when Zavala was about four years old. He and his brothers and sisters attended school while helping out in the cotton and cornfields, until they moved to nearby Taylor right before the war.

After the war, Zavala lived off of a weekly military readjustment allowance while looking for employment. After helping his brother-in-law with odd jobs for a while, he was hired by a furniture store in Taylor, where he stayed for 45 years, until his retirement in 1995.

He described wife Guadalupe as also being a “working person,” caring for their children and laboring with her sister at a meat market.

At the time of his interview, Zavala still lived in Taylor. Guadalupe, his wife of 54 years, died in 1999. He said he remains close with the rest of his family.

Zavala has been involved in the American GI Forum, a Hispanic veterans organization. He also volunteered for John F. Kennedy’s campaign in the 1960 presidential election and received an invitation to the inauguration.

Over the years, Zavala has seen many changes for Latinos living in America. He said he is pleased with the increasing number of Hispanics graduating from high school and college and proud that several of his own children successfully completed college. He attributed the improved graduation rate to child labor laws, which, among other things, require school attendance for children who might have previously spent their days doing formwork, and, as a result, make working kids less likely to fall behind in classes.

Zavala said he never felt his being a Latino was a factor in how he was treated in the military.

“There was no discrimination in the service, because we were all the same and there was no difference,” Zavala said.

As for the war itself, it was simply something way beyond his control, he said.

“Well, I didn’t like it. But there was nothing I could do, just to go ahead and do what we were told to do,” Zavala said.