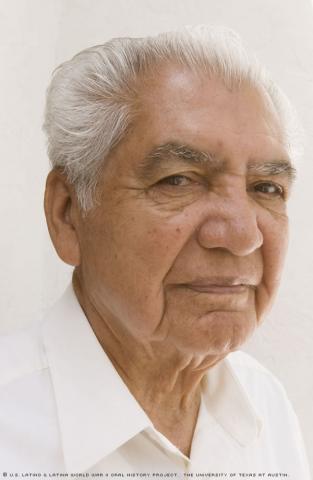 One of nine siblings and the fourth of five brothers to fight in World War II, Angel Romero consistently returns to the subject of his family and friends, and the support he has always received from them.

Romero tears up when talking about his parents and siblings, saying, “My family would have to be defined as unique. I wish everybody had a family like mine.”

He has nothing but praise for his father, Francisco Provencio Romero, who managed to support nine kids and his wife, Maria Morales Romero, despite pervasive discrimination against Mexican Americans at the time.

“My dad did just about everything,” Romero said. “He was probably the roughest, toughest hombre in the world.”

Although Romero’s father held many jobs throughout Romero’s childhood in the El Paso, Texas, area, the work Romero remembers most pertains to farming. He recalls himself helping out on the family farm, as early as age 11, by tending at least 10 acres of small plants.

Sometimes he’d even have to harvest greenery until after midnight.

“I was scared to be out at 11 years old,” Romero said. “I can’t say that I enjoyed it or not enjoyed it. It was something that we had to do.”

Romero’s hardships didn’t end there. For example, he recalls facing discrimination from students and teachers in elementary school.

“Even in school, when we spoke Spanish, we got whipped,” Romero said.

He remembers with a laugh a boy who used to tattle to teachers about Romero and his brothers speaking Spanish. They nicknamed the snitch “El Whitico,” after the school’s principal, Nell Whitiker.

Other students seemed to enjoy seeing the boys in trouble as well, Romero says. In fact, he recalls some of them making up stories of fights started by Romero and his brothers, just to see them in trouble.

Romero remembers his dad always coming to him and his brothers’ rescue during these incidents.

“My father would be the first man at the school with me. The three times I was expelled, my father was there” to intervene, he said.

When Romero’s mother died when he was 16, Romero remembers telling his father he was leaving school to find work. His father responded, “Who’s going to hire a 115-pounder that gets up at 2 o’clock to look for a job?” Romero recalled.

Then his father, who’d held a variety of construction jobs over the years, found Romero work with a concrete crew. The job was difficult, Romero recalls, because he had to mix gravel and cement together since there wasn’t ready-mix concrete at the time.

Romero says he learned a good lesson from that experience:

“It’s a back breaking job. Brawn is required 100% of the time – sharp mind or strong back,” Romero wrote after his interview.

So he decided to go back to school, as he’d only completed one year of high school. Romero attended El Paso Tech, where he learned woodworking and was able to earn 24 cents an hour from the National Youth Administration, a New Deal program aimed at Depression-era youth.

It was then when WWII came to the United States.

At first, Romero wasn’t worried about being drafted. The age for service was 21 and he was only 17. But then the age was lowered to 20, and then again to 18, so after his 18th birthday, Romero knew he was headed to war.

He recalls a buddy who was drafted at the same time. The friend, Felipe Arellano, told Romero to join the Navy with him. But Romero responded he couldn’t, because he’d get seasick on the boat.

“He never came back,” said Romero of Arellano.

Romero says he was in four major fights, including the Battle of the Bulge, that have been made into books or movies, but that no single battle stands out in his mind more than others.

“None [of the fights] are different, because it only takes one bullet to end your war or end your life,” Romero said.

During his more than two years in the Army, he traveled to Ireland, England, Holland, France, Belgium and Germany. Although he was hurt three times, he isn’t visibly bitter about his injuries, calling them “million-dollar wounds.”

“They were bad enough to evacuate me, and not bad because I’m still here,” Romero said.

In one incident in Holland, Romero was injured by two grenades. And in Normandy, France, he recalls friends hiding him wounded, four feet up hedgerows as tall as ceilings so Germans wouldn’t find him. He says he hid for three days, with Germans lurking less than 10 feet away.

Although he had morphine, Romero recalls being afraid to use it because he might fall asleep, allowing the Germans to find him. So he suffered through the harsh conditions until some infantry men found him and took him to an aid station. Coincidentally, the soldier at the 428th Evacuation Hospital who cleaned Romero’s wound and got him ready to see a doctor was an old school friend, Lorenzo Loya, Romero recalls.

He says one of his proudest accomplishments is having been a part of the honor guard for then-General Dwight D. Eisenhower in Germany. Romero remembers Eisenhower consoling him after an inspector, General George S. Patton, told him he needed a haircut.

“I wanted to hit him, ‘cause I knew I didn’t need a haircut,” said Romero, who recalled Eisenhower commenting that Patton was just “old-school,” and the idea of a perfect soldier was impossible. Patton had to get Romero on something, Eisenhower said.

Romero also remembers the friendships he made while in the Army. When discussing putting his life in his friends’ hands, and having them put their lives in his, for example, he remembers wondering, “Am I going to react or do what they expect me to do?”

Romero says although he rarely talks to those people anymore, the camaraderie remains.

“It’s a little more than a friend,” Romero said. “It becomes a very personal thing. I wouldn’t know how to express it, but it’s a very special thing.”

Discharged in December of 1945 at the rank of Private First Class, it was difficult to adjust to civilian life, says Romero, who got a job in a furniture shop, where he was happy to have little personal contact with anyone.

“I didn’t have to talk to anybody, which was a good thing,” Romero said.

He recalls being bitter for about five years about how he and other Latino veterans were treated when they got back from the war. For example, he and some friends went to a bar in Waco, Texas, where the bartender only served the two Anglos in the group. The others were refused drinks because the watering hole didn’t serve “Mexicans.”

“I was a veteran. I was twenty years old. I had been wounded three times,” he said.

Fortunately, one of the group members stopped Romero from throwing beer at the mirrors where the sign saying the bar didn’t serve “Mexicans” was posted, recalled Romero in writing after his interview. The friend said, “Let me make a phone call,” Romero remembered, and a few minutes later, a car rolled up with a police escort. A man stepped out of the vehicle, pointed to the waiting soldiers and told the bartender,

“These are Americans, look what they’re wearing. Look at the ribbons that they’ve got,” Romero said.

Then the man announced an ordinance had been passed that public places would serve the public and that the bar would be closed. Romero remembers that incident with a laugh when recalling how drunk he and his friends got later.

His bitterness about Americans’ welcome back of Latino soldiers finally changed when he was asked to coach a little league baseball team. He’d played the sport when he was younger but had quit after being injured.

“It changed my outlook, because people did trust me with their kids,” said Romero, adding that coaching the children made him feel happy again.

He also expressed pride in his baseball protégés.

“Some of those kids are now retiring with doctorate degrees,” said Romero with a smile, “and they still call me coach. They still hug me.”