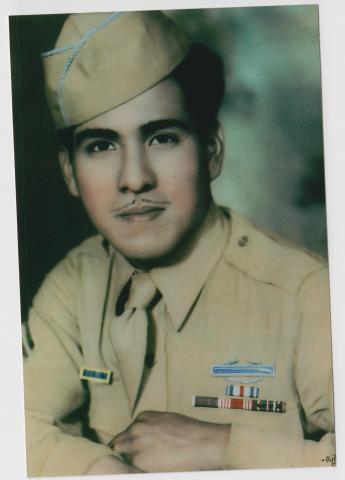 Andrew Melendrez lost his mother at 9 and his father a few years later. By 19, he had been drafted into the Army and would see brutal combat in Europe during World War II. He fought in some of the war's most harrowing battles, including what would come to be known as the Battle of the Bulge, one of the last major German offensives.

"I grew up more," he said of his war experience. "I had more discipline, more respect for people. I was more considerate of others."

Melendrez was born Aug. 22, 1924, in Casa Blanca, a town near Riverside, California. He was the oldest of five children.

The children were split up after his mother's death; his father had no way to care for his children, and he died from tuberculosis four years later.

In 1943, Melendrez was drafted into the Army. In mid-1944, he shipped out to England with the 120th Infantry Regiment, 30th Infantry Division. Before long, he was on his way to Normandy, in northern France.

Nothing had prepared him for what he would see there, including field hospitals filled with the wounded. "You could smell gunpowder and blood," he said. At a depot where troops would get their assignments, he also saw trucks loaded with the bodies of soldiers killed in combat.

"Then they sent us to the front. I didn't have any real combat experience, but right away, I was a gunner."

German bombers attacked his unit three times over two days, but the soldiers held their ground.

On the seventh day, his unit escaped, only to face equally fierce fighting in the Battle of the Bulge, in the Ardennes area, with the additional challenge of brutally cold temperatures.

As his unit crossed the Rhone River after the battle, his section leader tripped a land mine and was killed. Melendrez was wounded in one leg.

Melendrez was discharged in October 1945. He received a Purple Heart, a Silver Star, the European-African-Middle Eastern Campaign Medal, and other honors.

Mr. Melendrez was interviewed by Maggie Rivas-Rodriguez in Riverside, California, on Jan. 6, 2011.*