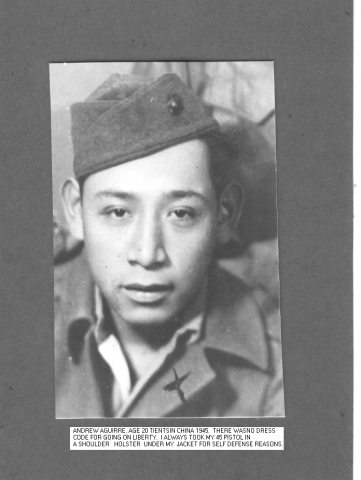 Andrew Aguirre's youth was overwhelmed with battlefield events that continue to haunt him to this day.

Growing up during the Great Depression, Aguirre's parents, Maximo and Sara Aguirre, struggled to feed and clothe nine children. All 11 members of the family lived in a tiny home, about 480 squared feet -- two rooms of about 12 feet wide and 20 feet long, with an outdoor toilet and a faucet for drinking water in the back.

Aguirre went to grammar school for six years and then attended junior high through the eighth grade.

When he first began school, Aguirre didn't speak English and was forbidden to speak Spanish.

"A couple of times I got in trouble, but I don't remember if it was forspeaking in Spanish or saying dirty words," he chuckled.

Aguirre attributes his difficulties in school to not speaking any English and to the challenge of leaving his "barrio" where he felt comfort because of the common culture and language.

Aguirre began picking grapes and cotton when he was about 14 years old, at which point he realized he had been away from school too long to return.

"No one cared whether I went or not," Aguirre said.

He began assembling wooden crates to pack tomatoes, cucumbers, celery and lettece. He could make 320 boxes in one day and was paid 5 cents per box.

Aguirre felt the traveling gave him independence even though he stillsent 50 percent of the profits home to his family.

In May of 1944, he joined the Marine Corps and shortly thereafter was sent to Guadalcanal, then to Russell Island and finally to Okinawa on Easter Sunday of 1945.

His first battle was in Okinawa and it was also the first time Aguirrewitnessed death on a major scale.

"Part of you dies with them," said Aguirre, reflecting on the sadness ofseeing Marines die.

Aguirre was an Amtrac operator. An Amtrac was a landing vehicle that was used by the Marines to land on the islands in the Pacific to deliver supplies and men across beaches. Aguirre's job sometimes involved driving through monsoons to load up dead Marines because trucks couldn't make it through the violent weather.

The Marine Corps made the men tough and callous.

Aguirre recalled one incident when he was approached by a Marine while he was admiring how beautiful it was outside.

"It's a beautiful day for killing," said the marine.

Aguirre was in Okinawa from April to August of 1945, when he learned theAtomic Bomb had been dropped and the Japanese had surrendered.

Marines earned points for their service. But by the end of the war, he had notearned enough to give him priority to go home. So in November of 1945, he wentto Tientsen, China, in order to accept the formal surrender of the Japanese Military in this area.

He spent a portion of the year there and then returned home to San Diegoin May of 1946, where he continued his old occupation as a "stoop laborer."

At this point, Aguirre realized his experience with war had changed him.

"The Marine Corps had opened my eyes," he said. "I told myself I couldfind better than field work."

He got a job with General Dynamics as a painter and spent a great deal ofhis time stripping paint.

He would be called upon again to serve his country in June of 1950, when the Korean War broke out. He arrived in Kobe, Japan, where they would begin loading up tanks, in preparation for the U.S. attack on South Korea's west coast port of Inchon.

Aguirre was then assigned to be a gunner in a tank; he found it difficult because there had not been enough time for training with the tanks they used.

On September 16, the U.S. landed at Inchon and began pushing towards the capital of South Korea, Seoul.

Aguirre recalls running into many ambushes and firefights, which he found difficult emotionally and often dreamt about.

When the American/U.N. troops arrived in Seoul, they engaged in a grueling weeklong battle, leaving Seoul in shambles.

On their way to Chosin Reservoir, they learned the Chinese were enteringthe war, which caused a great deal of animosity towards Gen. DouglasMacArthur, the commander of American/U.N. forces. MacArthur had assured American and U.N. forces and President Truman that China would not be entering the war and said it would be a quick and easy victory.

As the Chinese entered the battle, the American/U.N. forces found themselves outnumbered as well as unprepared and unable to stand up against China's elite, disciplined fighting tactics.

When the American troops attempted to retreat, Aguirre discovered problems with his tank's transmission.

Aguirre, whose tank was positioned last in the retreating column, assumedthe position of driver when the tank commander fled when the Chinese overran his tank.

Realizing his tank down and surrounded by Chinese soldiers, Aguirre forced his fellow crewmembers to follow him as they abandoned the scene of violent gunfire between Chinese and American forces.

"Looking around the ravine, we could see all kinds of shadowy silhouettes against the white snow," Aguirre said.

When they were spotted, they fled up a hill as Chinese troops fired at them.

"Trapped, we beat a retreat in the reverse direction and I hadthe men to dig a hole in the snow to bury themselves," he said.. "We'd see wherethings stood in the morning."

When morning came, they continued along the ravine bottom.

Later that day, the excitement built as they spotted a U.S. Marine plane which was sent to destroy all American equipment left behind, and believed it would send a chopper to rescue them; to their disappointment, the chopper never came.

Their first encounter with Chinese forces was successful because theChinese soldiers believed he was Chinese due to the fact he spoke a bit of thelanguage and his heritage gave him an Asian look.

However, their luck ran out when Aguirre and his three men were captured and taken prisoners.

For two months, Aguirre and his three men were marched to a prisoner-of- war camp in North Korea, south of the Manchurian border.

The conditions of the camp were terrible and many of the prisoners suffered from malnutrition and diseases.

The prisoners were forced to listen long and tedious lectures in Chinese about the positive effects of Communism.

He also remembers Black prisoners were segregated from the rest of the prisoners.

He says they would put them in a separate camp because that way would be easier to indoctrinate them and convert them to communism quicker and better without the interference of the White prisoners.

Aguirre was transferred in October 1951 to a camp near Changsong where he remained until August of 1953.

Here, he began his journey back home, but he and his fellow former prisoners of war were under close watch: there was fear that they had turned Communist during captivity.

Once he returned back to San Diego, California, he found out that although living conditions were better, he was emotionally unstable after his experience.

"I felt guilty for having wasted North Korean soldiers, I had just been released from a country with nothing to a country with everything, the doctors call this post-traumatic stress disorder," Aguirre said.

On September 9, he was back in San Diego and resumed his job withGeneral Dynamics, and enrolled in San Diego Community College.

He worked with General Dynamics for forty years until he retired in 1989.

Aguirre urges youths to learn self-discipline as well as to have goals and stick with them. He recommends, after high school, youths go into the military if college isn't an option.

"It gives you a chance to interface with different people from different culture," Aguirre said.