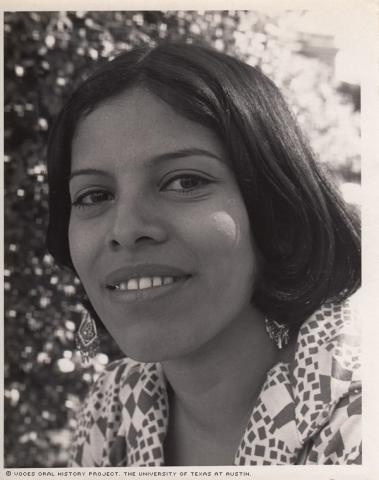 Amalia Rodriguez-Mendoza became the first minority district clerk of Travis County in 1991 and only the second minority woman to hold that position in the whole country. She went on to serve for 24 years, championing the causes of Latina women, women's health and the arts.

She launched her career in politics as a 24-year-old in 1970, when she ran for president of the Mexican American Youth Organization. She finished second behind Paul Velez, but that was enough to make her vice president.

"It was a pretty well-attended, high-energy meeting. A lot of people remember that meeting," she recalled. "But I led all of the meetings after that because the president didn't really want to be president."

She said the only reason "they put him in there [as a candidate] was because they did not want a woman" running the club.

"So that's how I got involved in politics, I learned how to count votes," she said. "I think it was always there, how it started. I think it could be a whole factor of things that transpired, but I was always involved in elective politics."

Born on Feb. 17, 1946, Amalia grew up in the predominantly Mexican-American border city of Del Rio, 260 miles southwest of Austin. Her father, Jesus Rodriguez, was a laborer at Texaco and her mother, Guadalupe Rodriguez, was a homemaker.

She completed elementary and high school education at San Felipe School District in Del Rio in 1964. The school was 99 percent Mexican American and had very few resources. But Amalia went on to attend UT-Austin from 1968 to 1972, majoring in sociology. She was the only one of her six siblings to graduate from college.

Even in the early 1990s, there weren't many women in politics and Rodriguez-Mendoza's path was far from straightforward. But she was committed. Since her college days at UT-Austin, she had been "thinking about what [she] wanted to do in the future" and had decided to take the route of district clerk. When she finally decided to run, it was because "I thought that I can handle that."

Her predecessor, John Dickson, had been in office since 1977. When he stepped down in 1991, Rodriguez-Mendoza won the position.

She said she was not in it for the title but for "getting Hispanics to vote and support different causes." She also focused on "improving the process in the office, to automate the system," and make it more efficient.

Before taking over as district clerk, she ran the voter registration office, serving as the director of the Division of the Travis County Tax Office from 1982 to 1989. Her knowledge of the voting process helped her play an instrumental role in the online empanelment process, which she calls "one of her greatest successes." It was a necessary improvement because "if you make the process difficult, people aren't going to do it."

Rodriguez-Mendoza said she worked closely with a number of organizations. She tried to help especially those who were espousing issues not always considered a priority. She was told that she "was a role model for women who wanted to run for office."

The representation of women has grown over the years, but Rodriguez-Mendoza said there are still too few people exercising their right to vote. Talking about her own political career, she said she "got involved because [she] believed in it, and it needed to be taken seriously."

"I didn't realize how you impact people over your career until you retire, and I got all types of feedback," she said. "People had appreciated what I had done."

Ms. Rodriguez-Mendoza was interviewed by Megan Breckenridge in Austin, Texas, on April 6, 2015.