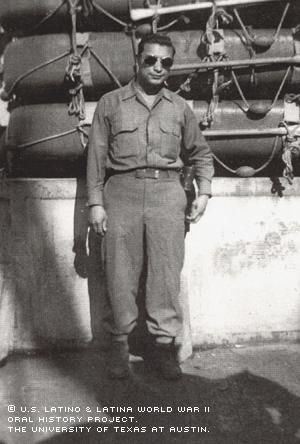 Amador Barbosa seems so matter of fact about his wartime experiences -- almost too matter of fact when you consider his primary responsibility was to clear mines and unexploded devices, as well as trudge through combat lines with 30 pounds of dynamite strapped to his back.

Barbosa remembers struggling to wade ashore as he helped one of his fellow soldiers onto Normandy beach during the D-Day Invasion on June 6, 1945. He was knocked flat three times by incoming German bombs at Omaha Beach. But Barbosa, like thousands of other Americans that day, surged ahead in the landmark Allied victory of World War II.

Barbosa's words today seem self-effacing, but in many respects they epitomize the lifelong work ethic of this Mexican American veteran from Kansas City, Mo.

"Well, I just did whatever I could. I just tried my best," said Barbosa, who was decorated with a Soldier's Medal for Valor, a Good Conduct Medal and the Middle East-Africa-Europe Campaign Medal with five bronze stars for his battlefield exploits in campaigns in Normandy, Northern France, Rhineland, Ardennes and Central Europe.

Born in 1921 in Kansas City, Barbosa grew up in a mostly Italian neighborhood, half a block from a park and a swimming pool. "I was lucky!" he said. His parents opened and ran the city's first Mexican restaurant, where the specialties were pork, spare ribs and chili.

"[My parents] were real good to me, and they always tried to make a good honest living," he said. He attended Manuel High School and was a varsity letterman in swimming, a skill that would later help him during the D-Day invasion.

After graduation Barbosa spent roughly two years working in an aluminum factory, until he was drafted into the Army on Jan. 8, 1942, at the age of 21. Though his parents feared sending their only son off to war, Barbosa says he had no reservations about going to serve his country.

After basic training, he was schooled for months in demolition, explosives, aviation machining and many other skills. In 1943 he boarded the Queen Elizabeth for a voyage across the Atlantic to join U.S. forces in Europe.

"I got so seasick -- I always get seasick," said Barbosa with a chuckle.

He joined the 112th Combat Engineer Battalion in the south of England. Their mission was to clear the English beaches of mines, underwater obstacles and barbed wire from previous encounters in order for the infantry division to perform mock invasions on the shoreline in preparation for the D-Day Invasion, he says.

"They told us to clean the section of the beach ... the mines had been there for years and they were touchy from the salt water ... you never knew when you'd step back and get blown up," Barbosa said.

As a sergeant in the battalion, it was his duty to send four-man teams out to clear obstacles ... until one incident changed everything.

One day when his team went out to clear mines, Barbosa was assigned to guard duty. The entire team of five men died that day, after accidentally detonating one of the mines. After this, he refused to send out any men.

"I told the officer in charge, 'If you want me to go do something, I'll do it, but I can't tell the others to go get killed. … I can live without the stripes, but I cannot live with this,'" recalled Barbosa, who says he was subsequently demoted to the rank of Private First Class.

"Finally it was getting closer and closer to the invasion time. They decided the weather was right and we headed out," he said.

Assigned to a boat carrying 1,500 lbs. of TNT, Barbosa was given the duty of lugging 30 pounds of explosives onto Omaha beach.

“[I]t seemed like hours and hours ... all dead soldiers floating off to sea as you're going in," he said of the journey onto the beach.

After jumping off his landing craft with nothing but a single life preserver to help carry his load, Barbosa says he stayed behind in the choppy waters to help another soldier with his equipment. "I was a good swimmer," he said.

He was also motivated to keep moving ahead, however, as he was carrying 30 pounds of TNT on his back.

"I really just wanted to get rid of that thing!" he said, laughing about his circumstances in retrospect.

After Normandy, his battalion headed into Northern France near the front lines, where their daily duties were rigorous, including guarding prisoners and clearing away more mines, recalled Barbosa, who says he tried to remain resilient and positive to keep his spirits high.

"You couldn't let it get the best of you; that didn't help and it might be worse," he said.

He recalls climbing once with four other men into a burning trailer full of explosives to remove the ordnance and keep it from blowing up. The trailer was filled with boxes of hand grenades, bullets and other explosives.

Barbosa recalls a small initial explosion really had him reeling:

"You've really gone and done it this time! … I don't feel dead, but maybe this is the way it feels,” he remembered thinking.

For facing such dangerous situations with courage and dignity, Barbosa was awarded a Good Conduct Medal and Soldiers' Medal, as well as a Presidential Unit Citation Badge for his part in the invasion of Normandy.

He was honorably discharged on Oct. 26, 1945, at the rank of Private First Class and returned to the States to work for the same business that employed him before the draft.

The company had switched from aluminum to plastic manufacturing, however, and though he was unfamiliar with the trade, he simply said, "Well, I'll do my best," he recalled, adding that he soon became a skilled lead man and made a successful career.

Barbosa married twice, and has been with his current wife, Joann Hundley Barbosa, for 32 years. Since his retirement 15 years ago, he has dedicated much time to the American Legion as well as the Guard of Honor, in which he helps organize services for deceased veterans who wish for military funerals.

"I just do whatever I can ... I want to see every serviceman buried with honor, respect and dignity that they deserve," he said.

A dedicated father, grandfather and great-grandfather, Barbosa says he wishes the best for his two children, just as his parents did for him.

"They need to know what we went through so they can have what they have now, and they better not let no one take it away from them," said Barbosa of younger American generations.

Mr. Barbosa was interviewed in Kansas City, Missouri, on August 8, 2003, by Manny Lopez.