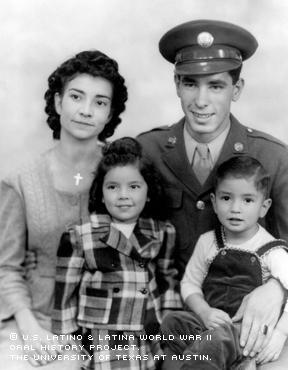 Seventy-nine-year-old Alfredo Cordova is one of the thousands of American men and women who served in the Army during World War II. His story starts in a poor town in New Mexico and takes him to California and Europe, and eventually back to his friends and family in New Mexico.

"My parents were very good people," Cordova said. "My wife and I took care of them when they were older, and we enjoyed doing it."

He’s the son of Samuel Cordova and Juanita Griego Cordova. Samuel served in France during World War I along with his brother. Prior to the war, the Cordova family had been sheep and goat herders in Rio Puerco Valley, Sandoval County, 50 miles northwest of Albuquerque. The family struggled economically and raised food to survive. Cordova's father saw no combat in WWI, but his uncle, Jesus Cordova, was wounded in the shoulder during battle and left in a ditch in enemy territory during an Allied retreat. Four German soldiers found him and carried him to the American lines on a stretcher made from sticks and overcoats.

"Before my father left for the war, he had a wife and a child," said Cordova, but they both died during an epidemic while his father was in France.

After Samuel returned from the war in 1921, he married his second wife, Juanita, and they moved to Albuquerque that same year. Alfredo, their oldest child, was born May 4, 1923. Two girls and a boy soon followed. Samuel worked for the Army Corps of Engineers’ Middle Rio Grande water conservancy project, and when Alfredo was 10 years old, his father moved the family to Pena Blanca, where he was given a job as a foreman. Although it was the middle of the Great Depression, Cordova says his family and many others in New Mexico were better off than before the Depression began.

During the summers, the local children worked in fields surrounding town for $1 a day, picking onions and alfalfa to get money for candy.

"Sometimes the farmers paid us with alfalfa bales," Cordova said. "One time I saved up about 20 or 30 bales and took them into Santa Fe, where I sold them for 50 cents a bale."

He has other fond childhood memories, including horseback riding and a scheme that helped him later in life. The water conservancy used dynamite sticks to blow up hills to make way for ditches and dams, and young Cordova and his friends hung out with older boys who knew where the dynamite was hidden. They would make homemade bombs with the dynamite and throw them into the Rio Grande.

"The explosion scared the fish, and for a few minutes they floated on top of the water in shock," he said. "We would then jump in the water and catch as many as we could."

Because of this prior knowledge of explosives, Cordova was switched to a company in charge of blowing up extra ammunition after WWII ended.

In May of 1940, Cordova married his childhood sweetheart, Lina.

"We have had good and bad times," Cordova said. They’ve been married 63 years.

The couple enjoyed seeing movies together, and that is where they were when the Japanese attacked Pearl Harbor. What distinctly stands out about that day in Cordova's mind is that on the streets of Albuquerque, everyone kept saying the war couldn’t possibly last more than two weeks.

A lack of jobs in Pena Blanca led the Cordovas to Albuquerque, and eventually, in 1942, to San Diego, Calif. There, Alfredo found a hotel room to rent, and eventually a job as an assembly line worker for Solar Aircraft. Once he was settled in, Cordova sent for Lina and their two children in Albuquerque, and they set up home near the factory. Then, in April of 1944, he was drafted, and the family had to return to New Mexico for him to be shipped out. On May 23, 1944, he boarded a train in Albuquerque bound for El Paso, Texas.

"I was standing on the back of the train," Cordova said. "And I remember Lina standing with our two children, and she was crying."

Cordova's family wasn’t shocked by his being drafted, as the war had been going on for more than two years already. Lina tried not to show she was scared, but deep down Cordova knows she was. His mother didn’t understand completely what was going on with the war, he says, so she didn’t worry as much about him.

From El Paso, Cordova was sent to Fort Robinson in Arkansas. Before entering the Army, he had a limp, and basic training was hard on him. Nevertheless, he completed the 16-week training course. He says he was motivated by the fact that he would have to repeat the 16 weeks if he failed. Cordova then had a 10-day delay before he was due to ship out of New York City, so he spent the time in Pena Blanca.

"We were on the boat to Europe for 31 days," Cordova said. "I got a cold because I was always outside on the top of the ship. I liked to watch it dip back and forth and to watch the porpoises that followed the ship when we left port."

Once Cordova arrived in England, he began to consistently collect canned food.

"My uncle said what he remembered most was the lack of food during the war," Cordova said. "They had problems getting food to the troops during World War I."

Cordova eventually dumped his stash of provisions while he was climbing a rope ladder onto a ship, because it made his sack too heavy.

He entered the war in France, joining the Texas National Guard’s Company A, 1st Rifle Battalion, 142nd Infantry Regiment, 36th Infantry Division. He fought in the Battle of the Bulge and other campaigns in France, Austria and Germany, subsequently receiving the Bronze Star for his help in the U.S. Army's taking of the Seigfried Line, along with the Good Conduct Medal and Presidential Unit Citation, as well as the American Service Medal, the Good Conduct Medal and the World War II Victory Medal.

He recalls the war with mixed feelings. Of the bad, he most remembers having a German soldier come up to him and a friend, with his arms raised in surrender. Cordova's friend killed the soldier in a blaze of gunfire, nearly cutting him in half with bullets. Cordova looked in the German's wallet and was upset to see a picture of the man's wife and two children.

"Some of it was so bad it made you want to cry, but I never cried," he said.

Some funny incidents also occurred. Once, when his company was being shelled, his captain went to hide in a barn and was hit by a bull. He was taken to the hospital. The irony that a bull was what took the man out strikes Cordova as humorous.

Another humorous incident he remembers from the war occurred within the first weeks after it ended.

"We still had our ammo for two weeks, and one day my company saw a deer running through the forest, and we all began shooting at it until our captain yelled at us to stop," Cordova said. "Even with all our shooting, you know, that deer got away."

WWII also brought a strange coincidence into Cordova's life. On May 8, 1945, when the conflict ended, his unit was in the Austrian Alps. A group of German soldiers drove by and surrendered to his unit. A Spanish man fighting for the Germans informed Cordova that a concentration camp that eventually fed into Dachau was ahead on the road. The five-man unit proceeded to the camp and blew open the locks on the gates, freeing the prisoners.

About five years ago, when Cordova told this story to a psychologist, the psychologist informed him that he had been held at that particular camp. The psychologist was a 6-year-old boy when an American Army unit – Cordova's – freed him.

"The smell in the camps was horrible," Cordova said. "If I saw them today, I would be more horrified than I was then, but war changes you. You are in a different mind."

Upon returning home in January of 1946, his father got him a job with the water conservancy, and because he was able to speak some with the German prisoners who worked in the fields, he was eventually made a foreman over the Germans.

"They wanted to know if I knew if various places in Germany had been bombed," Cordova said. He attended a trade school and learned about furniture upholstery and refinishing, eventually opening a furniture shop named Al's Upholstery. He was forced to retire in 1970 because of severe arthritis. Visiting flea markets became a weekend staple for him at this point. For 25 years, he went around to garage sales collecting and refurnishing furniture, and then spent every weekend selling it at flea markets.

The achievements of Latinos such as Henry Cisneros, Tony Sanchez and New Mexico's Gov. Bill Richardson make Cordova proud of his people. He says he sees much talent within the newest generation of Latinos, but he does feel they’re spoiled. His main advice to them is to stay off drugs.

"Our generation saw good and bad," Cordova said. "That is why they call us the "Greatest Generation."

Mr. Cordova was interviewed at the Veterans Center in Albuquerque, N.M., on Nov. 2, 2002, by Roberta Elaine Chavez-Morris.