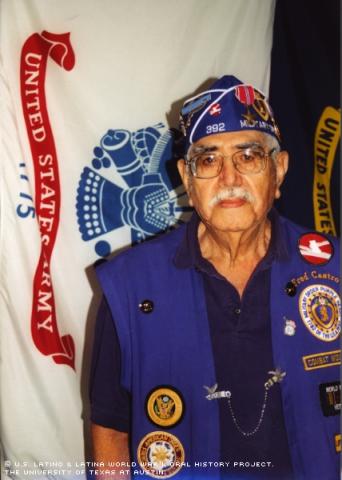 Alfred Castro wears a cap that bears his medals on the outside but holds his memories of the war inside.

Now 80 years old, Castro vividly remembers the details of his life before, during and after the war and the men with whom he served in the Battle of the Bulge during World War II.

Born in LaVerne, Calif., on Jan. 27, 1922, Castro describes a simpler life than most children know today, living among orange orchards, going to school and playing baseball to stay out of trouble.

"We used to live with our doors open completely," he said. "People never broke in the house or anything. We used to go out for two days and left everything in there."

His life wasn’t without hardship, however. He was 6 when his father died, and his mother died a year later. Castro said he has no memories of them, nor does he have any photographs. In the wake of their deaths, he and his two younger sisters went to live with grandparents.

A few years later their uncle died, so two cousins also came to live at the grandparents' home. He remembers the homemade meals his grandmother used to cook for them, like mole, which took two days to make because she’d grind all the ingredients by hand. Castro was raised eating good food and speaking two languages, Spanish and English.

"My grandpa and grandma didn't want us to know what they were talking about sometimes, so they used to talk in Indian dialect," Castro said.

His parents and grandparents came from Mexico with very little money, and worked to make a decent life for themselves in California. Castro's grandfather worked seven days a week at two jobs in the orchards to support the family. Life became more difficult at age 16, when his grandfather was unable to work.

"I had to leave high school because my grandpa got sick and I had to help out for my sisters and the family," Castro said.

His grandfather recovered and was able to work again, but Castro never returned to school. Instead, he said goodbye to his sweetheart of eight years and went to San Diego to join the Civil Service to work for the U.S. Navy. World War II had begun.

He started working in a warehouse loading weapons on ships when he was 20. One day, his boss told him he’d be drafted the next month unless he joined the Navy. He believed he’d be able to start at a higher rank than most men joining the service because he already had a good record and high security clearance.

He worked his last month for the Civil Service and then was drafted into the U.S. Army in 1942, instead of joining the "water lilies," as he called the Navy men. He was inducted Dec. 9, 1942.

Castro was shipped out to Texas for basic training, where he and four other Latinos in his squad encountered discrimination. There were signs on stores and restaurants in town saying they didn't serve Mexicans, and bathrooms and water fountains were marked "white" and "colored," which he’d never seen back home.

One night, Castro and about 10 other men from the military base split into groups and went to one of the town's nicer restaurants. They sat for an hour without being offered even a glass of water before a waitress pointed to the sign and told them the eatery wouldn't serve them. Angered, they began breaking windows, mirrors, dishes and anything else they could damage. The military police were summoned, but the lawmen looked the other way while the soldiers tore the place apart.

"They said as long as we have the uniform on, we're American citizens," Castro said.

From Texas, they went for more training in Louisiana, where the weather was hot and humid, but the people hospitable. Their final stop in the United States was New York; then they headed to England to prepare for the European Theater. They waited a month for the rain to clear up, and on June 6, 1944, Castro was crammed into a leaky fishing boat with 100 other men destined for the shores of France.

"They used anything that sailed to get over there. We were up on tables so we wouldn't get wet, but when we had to jump in the water, we went," he recalled.

Castro would serve in the Company B, 1st Infantry Battalion, 84th Division, assigned to the automatic rifle. His division went in around the 10th wave of Allied troops to hit France. By the time they landed on Omaha beach, the Germans were retreating.

The U.S. troops went through Paris, Marseilles and smaller towns, which were flattened except for a few buildings where German snipers hid. Castro remembered how American troops would make quiet cricket-like clicking sounds when moving around at night to signal they were friendly, as well as avoid being shot by their own men.

After liberating Belgium and Holland, Castro's division was allowed to rest, as many of the men suffered from combat fatigue after months of sleeping in shifts in foxholes. One night, they received orders to enter Luxembourg. They were now part of the Battle of the Bulge, the largest land battle fought by the U.S. in WWII.

Castro shattered his right knee after encountering a land mine. He was disoriented and didn't even realize he was injured until he reached down and his finger sank into a gaping hole in his leg.

"I didn't get killed, by the good of God. He just wants me to be here, that's it," said Castro, who was one of an estimated 81,000 Americans among those either injured or killed in the 41-day battle. Bombs hit one hospital he was in, killing two nurses sleeping in their quarters.

It wasn't until two months later when he was able to get back to the States, where adequate facilities existed for his needed surgery. His body twice rejected an artificial kneecap, so bolts were used to keep his leg together.

Castro was released on medical discharge, and after 3 1/2 years of duty, he returned to LaVerne. 1945 was a year of both endings and beginnings for him: Shortly after he left the Army, his grandfather passed away, followed by his grandmother six months later. He was also hired at a welding company, where he stayed for 30 years. He said he never returned to school because he felt he knew enough and was fulfilled with work.

Castro remains active in his local chapter of the Purple Hearts, an organization for veterans who earned the Purple Heart medal for being wounded in battle. He also earned a Bronze Star for bravery, among other medals.

Today, he lives near Los Angeles in Duarte, Calif. At 24, Castro married Alicia Ayon Lopez on April 16, 1945, whom he met at a dance before being sent to basic training in Louisiana. The couple was married for 54 years before her death, and had five children: Robert, Eulalia, Diane, Clifford and Darrel.

Despite his leg injury, Castro danced with Alicia upon his return, just as they’d loved to do before the war. Even though she’s gone, he enjoys the company of their five children and 12 grandchildren.

Mr. Castro was interviewed in Los Angeles, California, on March 23, 2002, by Laura Loh.