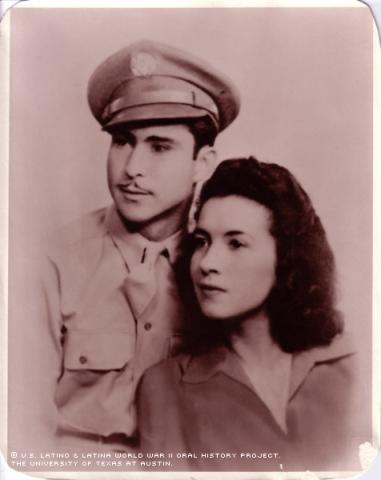 Alfred Dimas has spent his life in pursuit of adventure. This pursuit took him across the United States to find work wherever he could during the Depression, and in 1942 it took him into the U.S. Army as a volunteer.

But no matter where Dimas went or what he did, he says he always worked to keep his family alive.

As a young man, Dimas lived in Albuquerque N.M., with his mother, Clotilde Maria Dimas, father, Benito Dimas, and nine brothers and sisters. For the first eight or nine years of his life, Dimas and his family lived off the wages his father made as a mechanic for the Santa Fe Railroad. However, Benito was unable to work after suffering burns to his face and arms when a locomotive exploded. After a stay in a local hospital, Dimas' father was left with no pension and no work, and a family of eleven to support.

"I think back now and don't know how we managed -- they did anyway," Dimas said. "I was very young, and to me it was nothing. There was no Depression -- there was no such thing as far as I was concerned."

After the accident, the family traveled around the western United States looking for a spot where Dimas' father might find work. Eventually, the family settled in Phoenix, Ariz. While in Phoenix, Dimas enrolled in school, at which point he says he began to realize Latinos weren’t treated with the same respect with which they were treated in New Mexico.

"You had a little more advantage there," he said. "They didn't treat you as badly as they did in Arizona. When I was schooled there, they'd treat you like anyone else. [In Phoenix] they'd still treat you like a Mexican."

Along with discrimination at school, Dimas says he faced hard times at home. Because of his father's inability to work, he, like many of his peers, was forced to drop out of school at age 15 to support his family.

Dimas joined the Civilian Conservation Corps, where he and two of his brothers helped build a road up an Arizona mountain in an area near his home.

The job paid $30 a month, all of which he sent back to his family.

"I didn't like it, but we needed to," he said. "We were a big family. We all had to pitch in what we could. That's the way it was with my whole family -- always trying to help the parents."

As economic conditions worsened, it became harder to find work close to home, and Dimas says he became antsy. He followed his urge for adventure and began traveling to find employment. Over the years, he visited California, New Mexico, Texas and Colorado.

"If I wasn't working, I'd be gone in three days." he said. "I would just bum around to see what the rest of the world was doing. I couldn't sit still. I'd use the train or anyway I could. I know I never paid my way through, though. But I couldn't stand it, if there was no work over there, I couldn't stand just being around doing nothing."

When World War II broke out, it provided Dimas an opportunity to pursue his love for adventure and travel without having to worry about how to support himself. In 1942, he enlisted and began basic training at Fort Bliss in El Paso, Texas.

At Fort Bliss, he worked breaking horses in the cavalry.

"At that time, I was trying to train horses -- whatever was an excitement to me," he said. "I used to love the formations. When you see thousands and thousands of horses doing the same thing -- it was really something. I loved it."

Dimas' brother, Dan, also served in the cavalry, and Dimas says they’d run into each other about once a month. Eventually, Dan was sent overseas to fight in the war and was killed in action. Dimas says he learned of his brother's death through his mother, who’d received a telegram delivering the bad news.

"It was very hard on her," he said. "She suffered a lot. I think we were all in the service: Pete, Dan and I. I couldn't place the feeling, but it was a very sad story."

His service in El Paso wasn’t entirely sad, however. While in basic training, Dimas met his wife-to-be, Beatrice Escudero.

"It was on a Sunday, and I had been to Mass, early Mass," he said. "We were just waiting to see the girls, and I told my friend, 'I'm going to marry that one,' and that's how I met her."

After working in the cavalry, Dimas followed his hunger for adventure to Fort Benning, Ga., where he trained to be a paratrooper. The adventure was cut short, however, when Dimas injured his leg during a routine jump.

His injury was so serious he spent the rest of his military service in hospitals or on limited duty.

"I was transferred to Fort Mead, Maryland," Dimas said. "I was hospitalized there for a little while, then put on limited duty. I chauffeured for the colonel or sergeant, and I had different duties until I was discharged."

Dimas, who was discharged in the fall of 1945 as a staff sergeant, moved back to Phoenix to be with his family and Beatrice, who’d moved there while pregnant with their first child.

Dimas spent a little more time in a hospital in Phoenix until he was able to go to school to learn leather working at the Apache Leather School under the provisions of the GI Bill.

"I took up leather craft making saddles, purses, carvings," he said. "Then I'd jump to whatever there was. I never could sit idle -- had to keep on going."

After working in the leather trade for a few years, Dimas' passion for adventure once again took control. He went into tile work, where he worked tiling high-rise buildings that reached up to 20 stories. All of the jobs he worked were union employment. Although he says he never felt personal racial discrimination in the union, he heard it was there.

"I never had any problems at all," Dimas said. "I heard of a lot of times where they would give them [minority workers] the worst part of the job. I never had that problem."

Today, Dimas is retired and lives with Beatrice, his wife of sixty years, who he says is the most beautiful woman he has ever met.

While his life was spent pursuing an additional love -- adventure -- Dimas says he wishes he’d stayed in one place and learned a trade.

"I always wanted adventure, but that's about it."

Mr. Dimas was interviewed in Phoenix, Arizona, on January 4, 2003, by Maggie Rivas Rodriguez.