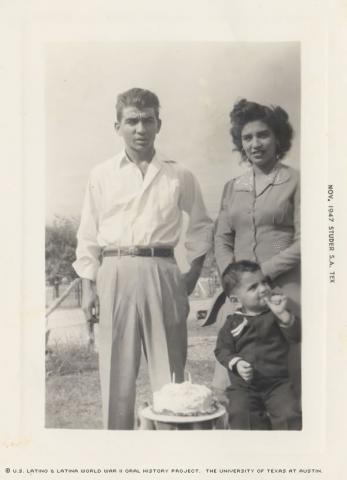 Alfred Antonio De La Cruz made $2 per week working as a radio technician, while the military paid $17 per month, so joining the Army was an opportunity he couldn’t turn down.

De La Cruz says he has always had a passion for gaining knowledge and a determination to never be complacent. Growing up poor in San Antonio, Texas, he recalls his parents insisting he get an education and strive to be the best at whatever profession or trade he went into.

“We never lacked for food or clothing,” De La Cruz said. “My father was a hard-working individual and a World War I veteran. Nothing bad ever happened to us, or to them.”

De La Cruz says he applied for the Signal Corps because his passion was electronics and radio. He couldn’t initially enlist at the Fort Sam Houston Quadrangle in San Antonio, however, because he didn’t meet the height and weight requirements. He recalls having to gain six pounds to reach the approximate 122-pound minimum.

“I didn’t weigh that until after about a month at the quadrangle eating bananas, pies and stuffing myself,” De La Cruz said.

Finally, on June 1, 1940, he prevailed and was sworn into the 2nd Signal Company of the 2nd Infantry Division.

That same determination enabled him to later learn Morse code, with the help of a friend in an Artillery Battalion at Fort Sam Houston. De La Cruz recalls studying the code with his friend during the day and listening to it at night.

Previously, while beginning his radio education in the military, Congress had reestablished the draft in late 1940, so De La Cruz noticed a significant difference when he came back to Fort Sam Houston.

“There were a lot of new faces in the company,” he said. “When I left, there were only three Hispanics in the company. When I came back, there was a whole bunch of them.”

It is impossible to know exactly how many Latinos fought for the United States in World War II because the military did not officially recognize Hispanics as a distinct ethnic group. When asked about the significance of Latinos in the war effort, De La Cruz said he personally didn’t feel as if his race presented any obstacles in his life, but added that the military was an opportunity for Hispanics to get an education they couldn’t have previously obtained.

“A big percentage of Latinos took advantage of the education aspect of joining the Army,” he said. …

“The Army gave us an opportunity to get a better education. Plus, we got to see a lot of the world and the way they live in comparison to the way we live. It opened up our eyes and made us look at things a little differently.”

De La Cruz transferred between the 2nd Signal Company, the 2nd Infantry Division, the 54th Signal Battalion and the 122nd Radio Intelligence Company until he wound up in the 72nd Signal Company, which was activated in January of 1942, then transferred to Camp Elliott in California, where its members trained in amphibious warfare with the 2nd Marine Division.

After training in California, the military sent him to Little Creek, Va., in September of that year for more training with the Navy.

De La Cruz was onboard the U.S.S. Harris in Virginia the day he realized they were headed overseas to war. When he went up to the radio room that morning to work his shift, he spotted more ships than he had ever seen before.

“You name it and it was there,” De La Cruz said. “Then they announced that we were heading out.”

“[W]e went over the [ship’s] side into assault boats[,] which circled around until all were ready for the landing at Safi, French Morocco,” wrote De La Cruz after his interview.

Once on shore, he recalls setting up his radio equipment and operating communications alongside fighting troops.

On July 10, 1943, De La Cruz’s 23rd birthday, his company was involved in an assault in Gela, Sicily. He says his company was told the opposition would be mostly Italians, who had already partially surrendered, and that the area had no German opposition.

“Our intelligence was wrong,” De La Cruz said. “Because all they had was German tiger tanks and, naturally, they were firing like mad. Luckily, the Navy was nearby to destroy a lot of the tanks.”

De La Cruz continued to learn, train and survive in Italy for a year, until July of 1944, when he was in a hospital in Naples, Italy, suspected of having tonsillitis. He recalls Uncle Sam informing him at the hospital that he had earned enough points to go home, then giving him a choice: return to his unit or return home.

De La Cruz returned to the States in September of 1944 and was assigned to a training unit at Camp Crowder in Missouri, until he was transferred back to Fort Sam Houston and discharged as a staff sergeant on July 8, 1945.

De La Cruz went back to San Antonio and worked as a radio technician for the same company that hired him before the war. On Feb. 11, 1945, he wed Belia Trujillo De La Cruz. They’ve been married for 64 years and live in San Antonio.

In 2008 and 2009, De La Cruz was awarded, among other honors, a Good Conduct medal, American Campaign medal, Europe-Africa-Middle East medal with one Silver Star, and, for the Gela assault, a Bronze Arrowhead. He says Uncle Sam awarded him the honors so late because his records were destroyed in a fire in St. Louis, Mo.

De La Cruz said after his interview that he is currently retired for a third time. Apparently, he’s still learning and striving to be the best at everything he does. His son, Roland De La Cruz, says De La Cruz’s latest project has been to master Microsoft Excel.

“He’s 89 years old and he’s always sending me spreadsheets and how to calculate different things,” said Roland over the telephone.

De La Cruz’s determination to never be satisfied is something he learned from his father during the Great Depression and something Roland says he has taught his children as well.

“I have only one goal, and that’s to never be second in whatever I do,” Roland said. “My dad taught me to always be the best.”

Mr. De La Cruz was interviewed in San Antonio, Texas, on May, 3 2008, by Kris Edward Rodriguez.