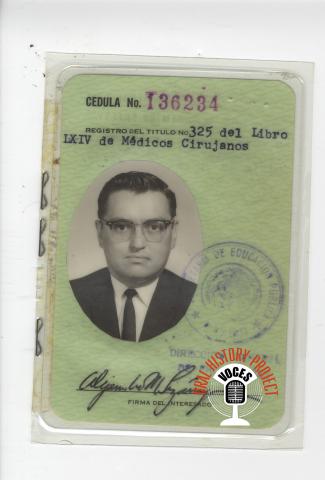 The late 1940s and 1950s were tense times in America. Fear of Communism was spreading, and Cold War tensions with the Soviet Union were growing. In 1950, communist North Korea sent troops into South Korea, and the U.S. came to South Korea’s aid, in accordance with its treaty obligation. President Harry S. Truman declared a national emergency: From 1950 through 1953, 1.5 million men were drafted and another 1.3 million volunteered for military service.

In August 1954, Alejandro Lizarraga of El Paso, Texas, was drafted into the Army. An armistice had been signed the previous year, but he worried that hostilities might flare up again and he could be sent overseas. The war changed the course of his life.

“A lot of things happened in 1954 for me, a lot of very significant things,” he said.

That February, he had married Herminia Saucedo, known as Minnie, whom he had met during his junior year of high school. In August, Lizarraga completed his undergraduate pre-medical degree at Texas Western University (later the University of Texas at El Paso).

Three months later, he was drafted and sent to Fort Bliss in El Paso for basic training. On Dec. 4, his first child, Laura, was born.

Born Aug. 19, 1932, in El Paso, Lizarraga was the only child of Alejandro and Maria Lizarraga. Both parents had been born in Mexico but later became U.S. citizens. His mother’s family had moved to the U.S. in the 1920s, fleeing Pancho Villa, the Mexican guerilla revolutionary. Lizarraga said his mother's father was on a Villa “hit list.” His own father’s family stayed in Mexico longer, and Lizarraga said he had little contact with them until after Herminia Lizarraga died in 1941.

Lizarraga recalled his childhood as happy and spoiled. Most of it was spent with his mother; his father lived in Mexico City during his early childhood for work purposes. Maria Lizarraga made sure her son learned to speak English without an accent.

“She was very careful with bringing me up. She wanted the very best for her child,” he said.

His grandparents, who lived nearby in the Sunset Heights neighborhood, did not speak English. So Lizarraga spoke English at school but Spanish at home.

During his grammar school years, the aftereffects of the Great Depression were wearing off and the economy was recovering. At the Alamogordo Bombing and Gunnery Range in New Mexico, the U.S. was testing the atomic bomb. World War II shook the world and set the stage for the U.S. and the Soviet Union to emerge as superpowers.

Lizarraga remained focused on his studies, graduating from Cathedral High School in 1950 and heading off to college. After graduating, he sought an extension of his college draft deferment so he could apply to medical schools, but the deferment was denied.

At Fort Bliss, Lizarraga found a way to visit his wife and new daughter, sometimes risking trouble from the Army.

“I had a little Plymouth that I used to drive over to Fort Bliss, park it, and at night after I got off duty, I would drive on to visit my daughter and wife,” he said.

He’d be gone from 8 p.m. to 3 a.m., getting back in time for reveille at dawn. But he still sometimes ended up on the AWOL list because he was missing at bed check time. The friendly company clerk who was in charge of the list would remove his name.

His next stop was Fort Sam Houston in San Antonio, where he was trained as a medical corpsman. He learned how to transport wounded soldiers by ambulance and helicopter, and how to provide first aid until they got to a field hospital.

It was too far to drive to visit his family, and long-distance phone calls were very expensive. Lizarraga said he wrote letters home four to five times a week.

In the summer of 1955, he was transferred to Fort Hood in Killeen, where his family joined him. He said the rent on their apartment was “exorbitant,” as locals took advantage of the fact that there was a large Army base and soldiers who needed places to live.

He was assigned to the 46th Armored Medical Battalion in the 4th Armored Division.

“It was sort of a MASH unit,” Lizarraga said, or mobile army surgical hospital. “The hospitals took on the duties as portrayed in “M*A*S*H,” the TV series about a field hospital in Korea that ran from 1972 to 1983.

Lizarraga was discharged in 1956. He moved to Dallas, where he and his wife, a registered nurse, worked at Parkland Hospital while he studied at Southern Methodist University and applied to more medical schools. In 1959, he moved his family to Mexico City so he could attend the National Autonomous University of Mexico.

“At that time, one of the big factors that helped me was the G.I. Bill. It paid for my tuition and my medical school and helped with my cost of living,” he said. “When you convert the dollar to pesos at that time, it was very favorable to the person with the dollars.”

After finishing medical school in 1963, Lizarraga moved back to the United States with his wife and by then six children -- Laura Leticia, Marcos Alejandro, Martin David, Miguel “Mike” Angel, Claudia “Nena” Magdalena, and Daniel “Dan."

At the border, customs agents inspected the trailer that held the family’s furniture and other possessions. One agent insinuated that Lizarraga was a draft dodger who had gone to Mexico to escape military service and was now returning. The accusation angered him.

“If it hadn’t been for my wife’s intervention, there might have been a Korean conflict at the border,” Lizarraga said. “We were not on the best of terms when we finished crossing.”

He went on to a medical career in New Orleans; Miami; Juarez, Mexico; and Oklahoma, retiring in 2000. His wife died in 2012, and Lizarraga now lives in Austin, Texas.

Korea set the pattern for future U.S. involvement in conflicts in other countries, such as Vietnam and the Gulf wars, he said.

Mr. Lizarraga was interviewed by his son Martin Lizarraga in Austin on Feb. 23, 2016.