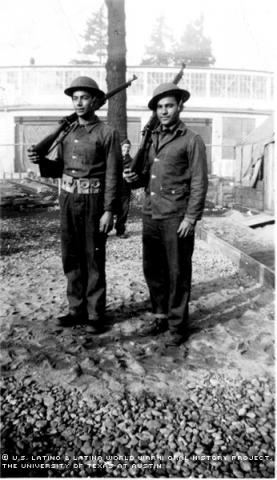 "I missed home but at the same time I knew I couldn't return," De Los Santos said. "I wrote to my mom very often to let her know how I was doing."

Before the service, life for De Los Santos was peaceful. The middle child of two brothers and three sisters, he grew up on a farm near Laredo. As a child, he attended school only sporadically because he had to work to help his family.

When he enlisted in the Army on March 5, 1941, he was only 18 years old and was assigned to the 66th Chemical Base Depot Company. He first received basic training at Fort Sam Houston in San Antonio, Texas; then was sent to Maryland for 12 weeks to receive training in chemicals. Next, he was sent back to Fort Sam Houston for about five months, during which time he had 15 days of vacation back home in Laredo and returned to Fort Sam Houston. It would be three and a half years before he would see his family again.

When Pearl Harbor was bombed on Dec. 7, 1941, De Los Santos had been in the Army for only nine months.

First, he and his company were sent to Fort Lewis, Wash., then to Pennsylvania, New Jersey and, finally, Iceland, where he spent two years taking care of munitions and equipment. His training also continued. After those two years, his unit was moved to England, when almost everyone was getting ready for the Normandy Invasion. In June of 1944, they invaded France; he spent about 14 months on the continent.

The mission of De Los Santos’ unit was to operate in the rear area: receiving, maintaining and issuing to front-line troops the chemical warfare weapons and equipment they needed. This included smoke and flame, war gases and decontamination equipment. In World War II, lethal gases weren’t used by mutual aversion and restraint, but were available for retaliation if gas warfare broke out.

Their company's mission was to remain prepared to provide munitions. He and the other men in the 66th Chemical Base Depot Company were never involved in combat; they were always behind the lines. De Los Santos marveled that not one person was wounded in his company; he clearly remembers the sound of the enemy planes at night, flying and shooting at them while they were concealed.

De Los Santos was supposed to keep his work overseas a secret; even today, he isn’t supposed to discuss details. He said that most of the time he worked there as if it was just another job he took. The majority of the time he spent in the war was doing "routine" work, checking that the equipment was in order and clean. If the men finished with their usual duties, the officers kept them busy giving other duties like cleaning or marching, or anything that kept them occupied.

Allied forces took Paris back from the Nazi powers on August 25, 1944. Sometime after, De Los Santos and his friends visited Paris, which was close to the location of the company. He and his friends were able to see the destruction throughout the city; they walked around for a while and returned to their unit.

At last, the war ended in Europe in May of 1945, but fighting continued with Japan. The unit was separated by time in service, as the newer members were headed for the Japanese war.

De Los Santos’ part of the company was assigned to Belgium. He arrived back in the U.S. via the Port of New York, and was greeted by crowds of people welcoming the soldiers with music and merriment. De Los Santos was put on a train and sent to Fort Sam Houston. He earned three medals: a Europe, Africa and Mediterranean Campaign Medal with three Campaign Stars, Good Conduct Medal and American Defense Service Medal. Later, he qualified for the WWII Victory Medal. He was honorably discharged on August 5, 1945.

"They paid us and I finally return to Laredo with my family," he said.

"Even [though] my brothers and I participated in World War II, we never talk about how it was. For me, as I said, it was another job. I don't regret join in the military and I doesn't think my life has changed a lot after the war."

For a while, he studied English and Management at San Antonio College.

"I have had a wonderful life with a great family, friends," he said. "And I'm surrounded by people that love me and whom I love."