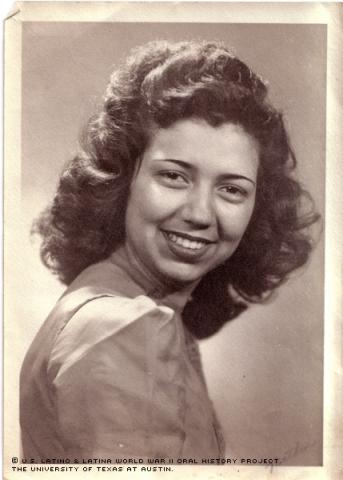 "It was rough for us attending school in Texas because discrimination was bad there," Zuniga said. "I remember trying to get along with all the kids in the classroom, but they looked at us like we didn't belong there."

Zuniga remembers the teacher would at times ask the class to come together for a drawing assignment, and Zuniga would sit next to a little Anglo girl.

"After a while it dawned on [the girl], and she would realize I was Mexican," Zuniga said. "The girl told me she couldn't sit next to me because I was Mexican."

According to Zuniga, discrimination was a major issue throughout her time in school. She says she was smart as a young girl, and always tried to become involved in activities.

"I remember a play, like I said, I was into everything," Zuniga recalled. "In the play, they had me behind the curtain singing. I didn't understand this because I didn't see why they did not want to showcase me as being the actual singer."

Born in Gonzalez, Texas, on May 17, 1923, Zuniga was one of 11 children who helped her father, Boreteo Rojas, and mother, Zarita Ruiz, work in the fields of cotton and sugar cane. The fields were a major part of Rojas family life, because they generated money on which the family could survive.

The family traveled between San Antonio and Michigan, Zuniga says, always looking for work opportunities. They traveled to Michigan every year and eventually settled there in 1942.

"At the time when World War II started in 1941, our family got word that there was an attack on Pearl Harbor," Zuniga said.

Not long after that, Zuniga's brothers were drafted. With them gone, she looked for work in Greenville, Mich., to support the family. From working in a plant, she saved enough to attend the School of Cosmetology in Saginaw, Mich., where she eventually opened her own beauty shop after finishing beauty school in 1948.

Zuniga married Tom Zuniga and started a family in 1947. They settled in Saginaw, where the couple raised five children and managed to run the beauty shop while the children went to school.

"I consider myself kind of lucky that I had a trade," Zuniga said. "I have five children, they all graduated, they are all married now, and have their own children."

Through the support of her family, especially her brothers, Zuniga became a member of The American GI Forum, the nation's largest group to support American military veterans of Hispanic descent. The organization advocates for Latinos and is actively involved in issues concerning the Hispanic community.

The American GI Forum of the United States was founded March 26, 1948, in Corpus Christi, Texas, by Dr. Hector Perez-Garcia, a veteran of the Army Medical Corps during World War II. His goal was to provide good health care for veterans who needed it and were refused because of their Mexican ancestry. The organization helps Latino veterans in 30 states and 500 chapters.

Zuniga is a part of the women's chapter in Michigan, where the organization deals with issues such as employment, housing, civil rights, woman's programs and youth activities.

"My husband was a member and encouraged me to join," she said. "I learned a lot from my own people joining this organization, because it is a national organization. Going to conventions, I learned and got acquainted with other people that make it into the higher world."

According to Zuniga, the organization serves as a form of education. She says Garcia, the group's founder, knew that many Hispanic veterans weren’t treated like other veterans because they weren’t literate in English, and therefore weren’t aware of benefits they could receive.

"In Texas, there was so much discrimination," she said. "The returning veterans, like my brothers, were finding it hard to get help. The founder made it possible by organizing the American GI Forum nationwide. So with that, the organization started having chapters in different states."

"One year I attended [a national convention], and I came back here to Saginaw and told the women's chapter that I was so tired of listening to the comments and people telling us we have problems with dropout rates. We started our program, Adopt-A-School, for American GI Forum in 1974, and I was also serving on the Women In Community Service National Board, which recruits boys and girls for the job corps center in regions," Zuniga said.

Zuniga says she’s thankful her parents gave their children the understanding and knowledge a big family needs, and that she is proud of her own children, who have decent jobs and didn’t have to struggle like her family. She is most proud, she says, of the years her brothers gave to the country.

"It's always a good feeling to know that they served the country well, and that's what I respect of the veterans. The Hispanic veterans have all made a difference," she said.

"My mom passed down a tradition where she wanted all of us to work together and produce for one another," Zuniga said. "It's a learning experience, and I feel good I am trying to do something."

Mrs. Zuniga was interviewed in Saginaw, Michigan, on October 19, 2002, by Raul Garcia, Jr.