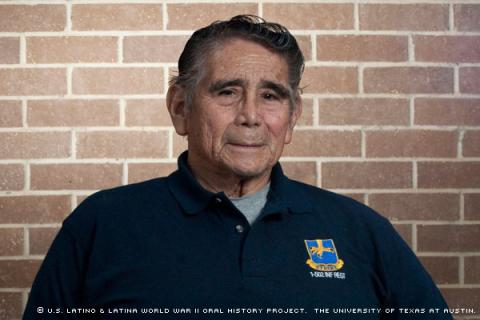 When Albert Ramirez was asked what his favorite thing about serving in the U.S. military was, he responded that it was the opportunity to serve his country; and although he did not say it, his second favorite part likely would have been the girls.

Ramirez, a Laredo, Texas native, grew up in a household that included 13 children, a mother who worked as a housewife and a father who taught him carpentry-- one of two loves of his life. His second love were the girls. In fact, it was a girl who prompted him to volunteer in the first place.

That occurred when he was sent on a carpentry job to Zapata, Texas.

“I was supposed to meet my girlfriend,” Ramirez said. “When I got there she was with an airman so I got angry and I joined the Army.”

That was April 8, 1957, which happened to be his birthday. Since Ramirez was supposed to be drafted in the coming June, he saw no reason to wait any longer and he volunteered the next day after consulting with this father who gave him his blessing.

Ramirez received all of his training in Washington, Alabama and Kentucky. After completing training he went on to serve in Germany from 1958 to 1960. His duties included carpentry and other trades.

He was assigned to the 2nd Infantry Division, 101st Airborne Division and later to the 8th Infantry, 7th Army.

During his time in the military, he learned many skills that he likely would not have learned at home. He also was exposed to different people and cultures. His most memorable encounters with racism involved girls.

“One time when I was in Germany there was a guy from Texas who said you know you Mexicans are going around with blonde girls here but in Texas that don’t happen,” Ramirez said. “So one day I was in a German guest house. I went to the restroom and when I came back there were two young ladies at my table…they were from Texas and one of them went out with me.”

Ramirez had also boxed for a year a as a Golden Gloves middle-weight before leaving to Germany where he picked it up again for a year. This was how he met Isla whom he dated for the duration of his stay in Germany.

Another instance of racism occurred when Ramirez was first stationed in Alabama and wasted no time getting to know the ladies of the South. It was not long before he met Joan who became his girlfriend and introduced him to her family. Joan’s mother was less than delighted that her blonde-haired blue-eyed daughter was dating a person of color.

Their first meeting was a memorable one according to Ramirez.

“She said what’s your name and I said my name is Alberto Ramirez and I am from Laredo, Texas and she said are you Puerto Rican?” Ramirez recalled. “I said no ma’am. Are you Cuban? No ma’am. Well what are you? I am a Mexican. That’s even worse!”

Growing up in Laredo, a predominately Hispanic town in South Texas, Ramirez had not encountered many of these types of racial remarks.

As a child Ramirez spent weekdays working with his dad, Jose Ramirez, after school and spent the weekends romancing his “girl”. Other activities that he enjoyed with his sibling were playing football, baseball and boxing.

Although Ramirez looked upon the time that he served and the people that he met with fondness. But for him the best time was when he returned home. He was discharged at Fort Sheridan, Ill., on Feb. 1, 1960 at the rank of private first class. He met and married the love of his life Emilia Soto, with whom he had three children.

Ramirez worked as a vocational teacher for 27 years at Laredo Community College and continued to teach in San Antonio before retiring in 2009. He and Emilia raised their family in San Antonio. Emilia passed away in 2001 and Ramirez was left to be a grandfather alone.

One of the traditions that he has passed down to his children and grandchildren was the carving of benches for holidays. On Easter he carved benches with eggs and bunnies on them so that his family could take pictures on them as his father used to do.

Mr. Ramirez was interviewed on March 6, 2010 in Laredo, Texas by Brenda Menchaca.