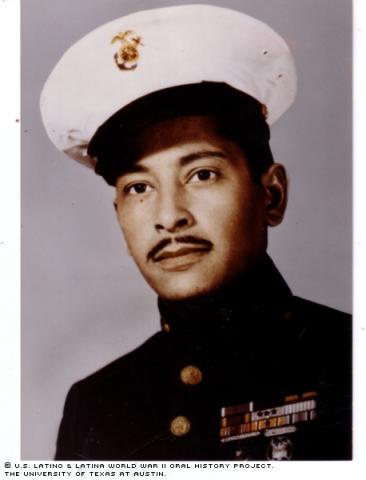 Fourteen-year-old Alberto Bosquez grabbed his stack of newspapers in 1941, headed to downtown San Antonio and began dealing them out. "Extra! Extra!" he called out, "Japan bombs Pearl Harbor!"

Aside from the papers being sold, Bosquez didn't think much at the time about the headlines: Big headlines simply meant better sales. Bosquez had been hawking newspapers since age 6, as a way of helping his father, Alberto Bosquez, Sr., support the family. Even though Bosquez characterized his family's economic circumstances as average, the Depression made times difficult. The elder Bosquez, a carpenter, struggled to support a family of five. His mother, Aurora Robles Bosquez, prepared the children's school lunches at home because they couldn't afford cafeteria lunches. And young Alberto ran barefoot through downtown San Antonio, peddling papers to everyone, from beer-joint clientele to prostitutes. Bosquez didn't care who bought the papers as long as he got his coins.

Then, after years of calling out war headlines, Bosquez decided he wanted to join the war effort. So, in 1943, he dropped out of high school at age 16 to enlist in the Navy. Only two barriers initially blocked his way: his young age and his mother.

"My mother didn't want me to go," he said. "But my father signed the papers, so I went."

An ink eraser got Bosquez around the other barrier. He altered his birth certificate to make himself a year older, changing his birth date from 1927 to 1926, which made him eligible under the Navy's age requirement of 17 years. After five weeks of boot camp in California, he shipped off to the Mariana Islands, only 1,200 miles south of Japan.

Even though Bosquez was stationed in a combat zone, he didn't participate in any battles. As part of the crew of the U.S.S. Phaon, a service ship designed to repair battle damage to naval craft, he spent 18 months doing grunt work -- washing dishes, repairing rust spots on ships and making supply runs to Saipan. War for Bosquez was something he saw and heard from a distance.

"Most of the time I stayed there in Saipan while the war was going on," he said. "A lot of Marines were making landings and everything and ships were going back and forth and I was in Saipan on the stupid boat.

"I hated that ship and I hated the island because they wouldn't let me go," he said. "Everybody was going over fighting the war and I couldn't go. I volunteered for every duty I could and they wouldn't send me."

The final blow came when Bosquez watched hundreds of ships sail into Saipan, preparing for the attack on Iwo Jima.

"I cried like a baby because I wanted to go to Iwo Jima and they wouldn't let me go," he said.

Bosquez says he supposes his commanders refused his requests for duty because of his young age. He also says he believes destiny prevented him from perishing in Iwo Jima, a battle that took nearly 6,000 American lives.

Discharged from the Navy in 1946 at the rank of Seaman, Bosquez returned to San Antonio and took a series of odd jobs. Two years later, he decided to enlist in the Marines. After training at Camp Pendleton in California, Private First Class Bosquez shipped off once again to the Pacific. This time, he’d experience a battle like none he’d ever experienced before.

In August of 1950, Bosquez, along with the 1st Provisional Marine Brigade, made a landing at Pusan, a major seaport in South Korea. Their orders were to make an amphibious assault at Inchon, where they’d have to climb a towering wall to make it in the city. Then they were to advance to the Yalu River, close to the Chinese-North Korean border. Confident after having liberated South Korea capital Seoul, as well as the Kimpo Airfield, Bosquez felt prepared for the battle along the Manchurian border.

"They threw the best North Korean Army that they had against us, and they couldn't do it. We stopped them. We made them run and I was one of the guys," he said. "No prisoners. No mercy."

The battle for the Chosin Reservoir proved to be different. First, there was the weather. Temperatures plummeted to 50 degrees below zero as the Marines trudged through deep snowfields. Then, there was the resistance. Approximately 300,000 Chinese soldiers crossed the Manchurian Border.

The 1st Marine Division had no choice but to retreat.

As they headed back, Bosquez felt a pain in his foot not unlike the feeling of stepping on broken glass. Then, both his feet started hurting until it spread to his legs and hands. After passing out from frostbite, he was evacuated. Bosquez was discharged in 1951.

Coming back from the Korean War wasn’t easy for him. Not only did the country not recognize the Korean soldiers for their bravery; Bosquez also suffered psychological trauma from the war. He found he couldn't settle down; he lost some years in an alcoholic haze.

He used the GI bill to study welding at Del Mar College in Corpus Christi, Texas, where he met his wife and married her. But even with this training, Bosquez still couldn't find a job.

"They wouldn't hire Mexicans," he recalled. "They hired you to dig a ditch, but I wasn't no ditch digger. I was a welder."

Bosquez eventually settled for construction work to support his family of five children: three boys and two girls. In the 1970s, he became active in the Catholic Church, which he attributes to a turnaround in his life. He says it put an end to his "wild" behavior.

Today, Bosquez says he’s proud to have been a Marine and still thinks of his outfit as family.