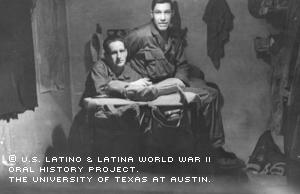 "You're wasting your time and mine too," Angel remembered saying. "I wanna go overseas."

Angel was born March 13, 1923, one of seven children of Rosalio Angel, a railroad laborer who became a farmer during the war years, and Fermina Valancia Angel, a housewife.

"I am a child of the Depression era," Angel said. "I graduated from school in 1943 and went immediately into the service."

While attending school in Endee, N.M., 216 miles east of Albuquerque, Angel worked on the family farm to help make ends meet. His family grew melons, fruit, vegetables and fodder for livestock, as well as raised chicken, pigs, horses and cows. He usually got behind in his classes because he’d start the fall semesters late to finish work that needed to be done. Yet Angel felt it was his obligation to help out.

"It was pretty rough," he recalled. "Sometimes we had enough to eat and sometimes we didn't."

Angel has vivid memories of riding horses on the open fields and roaming the countryside. When he was even younger, his father told him and his siblings ghost stories, he says.

He also recalls how he learned English.

"My first teacher was really good," Angel said. "So I was able to get along."

With a life divided between farmwork and schoolwork, Angel managed to graduate from high school at age 21, taking a few years longer than most students, as he took time out to work. He, his older sister Lucille, and his youngest sister Mary were the only ones of his seven siblings to graduate.

Angel was helping his mother when he found out about the attack on Pearl Harbor.

"It was a sunny day, and my mom had some furniture that I was painting for her outside, when I heard the news that the Japanese attacked Pearl Harbor," he said.

Young Angel had been offered work on a ranch, which would have paid for his housing and meals, plus $30 a month. He considered his options.

So in 1943, Angel enlisted and was sent to Amarillo, Texas, for training, as well as Sheppard Field in Texas, for airplane mechanic school. He was promoted to Private First Class after training in Amarillo.

He was later sent overseas but not into combat. Stateside still, he was sent to teletype school in Camp Kearns, Utah, where he learned to type and send coded messages.

Angel was put on the Queen Mary, which was bound for England. He recalls undergoing a culture shock.

Kilted regiments greeted the Americans upon their arrival, and the food wasn’t what was expected. At one meal, Angel and others thought they were being treated to dessert, which turned out to be mutton pie.

"Everyone thought they were getting apple pie," Angel said.

He recalls his work being similar to "a regular job," where he’d check in and check out. His job consisted of sending and receiving coded messages. He never knew what the messages said.

Back home, his family waited for him and two brothers, Facundo and Frank, away at the war. Facundo served with the 3rd Air Force, 325th AAF Base Unit, while Frank served with the 1st Infantry Division in North Africa, and would later participate in the invasion of Normandy on D-Day.

"I guess they were glad that we were in there," said Angel of his family, "but still they were worried."

In 1945, the war in Europe ended. While waiting for orders to be sent to the conflict in the Pacific, Angel received word that Japan had surrendered as well.

Upon his return from the war, he found his hero's welcome left much to be desired.

"I just landed at the depot and walked home," Angel said. "Not like these soldiers now, that get parades."

Angel worked for the U.S. Bureau of Reclamation as an engineering aid for a time, and then started work as a security inspector for Sandia Research Laboratories in Albuquerque, N.M., where he worked for 36 years. He was already married at this point, to a woman named Ana Baca, whom he met while on leave in Tucumcari, N.M., in 1943. Together they raised three children.

After the death of Ana, from a cerebral hemorrhage in 1988, he met and married Patricia Esquibel Plent.

Angel regards his service in WWII as his duty as an American, and says it allowed him to experience many things he wouldn't have otherwise.

He says that, before the war, Latinos were often denied entry into places such as pool halls and restaurants. Being light-skinned, Angel didn't go through much of that, but he saw it happen to others.

"We were hauling grain [to a store] in Texas," recalled Angel, "and this [Latino] guy walked in there and wanted to buy a pie. Everyone [the customers] just walked out."

Although that kind of treatment continued to some extent, Angel says participation in the war gave Latinos more educational opportunities, of which many took advantage.

"A lot of Hispanics are getting educated and are getting better jobs," said Angel, who has 10 grandchildren and six great-grandchildren. "They're finally realizing that we belong, and can do things just as good as anyone."