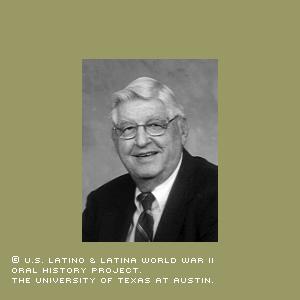 Albert Armendariz has practiced law in Texas for over 50 years. The 81-year-old WWII veteran spends many weekends driving to represent his immigrant clients in West Texas who are trapped in the legal system.

And it is fitting that Judge Armendariz - the title he has because of his years as a federal immigration and as an appellate court judge - continues to fight for the rights of immigrants. Today, he wears earphones attached to an amplifier that compensates for his diminished hearing. A judge recently suggested that he retire.

"But he's not going to tell me - nobody is gonna tell me when I have to retire," Armendariz said. "I'm going to retire when I want to retire."

Armendariz's father, Juan, fled from the Mexican government and settled with his wife and children in El Paso, Texas. Now that the Armendariz family was far from their familiar home, they made sure that their children pledged a new allegiance to the United States.

When Albert Armendariz began school at Bailey Elementary in El Paso, he did not speak a word of English. His father made sure that he went to school on the "north side of the tracks" where white children attended. The young Armendariz quickly learned English by going to these racially mixed schools.

Armendariz grew up with the conviction that his loyalty was to America. He later recalled his father's words: "Your country is at war and they may call on you. You are not a Mexican. You don't owe allegiance to Mexico," he said. "You owe it to the United States... I expect you to answer the call and if you die from it, I want no cowards in my family."

Armendariz graduated from El Paso High in 1934 and married his high school sweetheart, Mary Lou Regalado. After joining the service, he served as sergeant, overseeing the motor pool at Ft. Bliss, in El Paso, Texas. He was later assigned to oversee the Italian prisoners of war at Ft. Bliss.

After the war was over, he used the GI Bill to attend law school. With the strong support of his wife, Armendariz completed his undergraduate degree at the University of Texas at El Paso and was accepted to the University of Southern California Law School.

Armendariz's father strongly opposed his son attending law school because of his responsibilities to his wife and child at the time.

"I knew it was going to be a struggle, but I was willing to do what I had to do," he said. "At that time, it was nearly impossible for a Mexican to go to law school because of lack of money and that fact that many schools did not allow Mexicans to attend."

His wife, Mary Lou, worked while her husband went to school.

Armendariz was the only Hispanic at the USC Law School. But with a steel determination and extensive family support, he fought through the discrimination of his peers.

"I stood out like sore thumb," he said, in written comments after the interview. "Everyone, from the administrators to the professors, to the students, believed that I had no place on the campus."

He said that his wife was supportive during his challenging times.

"It was horrific at times, but when I'd come home complaining to my wife, she'd ball me out and say, 'You're not here to make friends; you're here to become a lawyer,'" he said.

Armendariz graduated from USC in 1950 and returned to El Paso.

He passed the bar and received his license in the state of Texas to practice law. With a newfound belief in his son, Armendariz's father loaned Albert $50 to start up a law office in downtown El Paso.

While studying to obtain his law degree, he never lost sight of his culture and always desired to give back to his community. In his small storefront office, he developed a practice that dealt with cases involving Latino immigration. It was important to Armendariz to open his office in an economically disadvantaged area of El Paso because it was where he felt he could best serve his community.

"I had clients waiting for me as soon as I opened the doors," he said.

He quickly became a community leader and served on countless committees and boards that addressed the issues he would fight in his law practice. Armendariz was an active member of the League of United Latin American Citizens (LULAC). He was a founder of the Mexican American Legal Defense and Educational Fund and served as the chairman of the board of trustees. His efforts in this organization helped acquire major financial support from the Ford Foundation for scholarships. He served on the city of El Paso's Civil Service Commission and through that agency put an end to the exclusion of Latinos and other minorities from city jobs.

In 1976, Armendariz was appointed an administrative judge for the Immigration and Naturalization Service and served in that capacity until 1985. He was then appointed to the Texas Court of Appeals, 8th Circuit. He is known as "Judge Armendariz" in El Paso and elsewhere.

His first wife, the beloved Mary Lou, died in 1993 of complications from diabetes.

"Mary Lou was my partner for a long, long time," he laments. "She stood by me through thick and thin. My successes were her successes."

Three years ago, Armendariz married Maria "Mari" de Jesus Jauregui. And it is the second Mrs. Armendariz who often acts as his driver on the weekend work trips to small West Texas towns to represent clients.

It is his work that keeps him going, he acknowledges and he says that he'll "die with my boots on."

Armendariz's accomplishments displayed his love and commitment to serving the Hispanic community. Money and recognition have never been the primary motivation for his success, and wanting the best for his people has been his crowning glory.

"I have no financial substance in the same sense that other lawyers have," said Armendariz. "But if I had a choice I'd do it all over again."