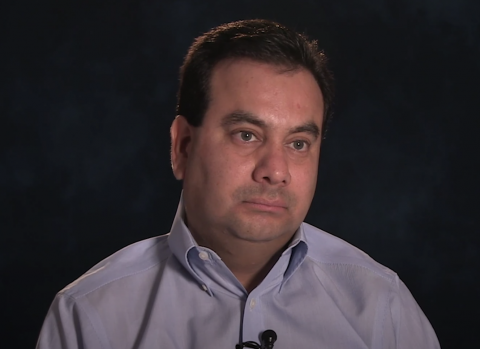 Albert Alvarez did not have to make any compromises to become mayor of Pearsall, Texas. He knew exactly why he wanted to do it and had the background and name recognition to help get him elected.

His father, Adolfo Alvarez, had served as Frio County Commissioner for 16 years, and Albert also wanted to represent the people of Pearsall.

“I wanted to be like my dad and follow in his footsteps,” said Alvarez. “Not only in the business world, but as an elected official as well.”

Albert Alvarez was born Feb. 23, 1967, in Pearsall, a city about one hour southwest of San Antonio. His parents, Adolfo and Guadalupe Morales Alvarez, ran A&A Auto Parts, a family business they opened in 1973. The couple raised their eight children to be close and supportive.

“It makes life easier,” said Alvarez, referring to the closeness of his family. Unlike many rebellious teenagers, he grew up close and involved with his family.

“We would hear our parents’ discussions at the dinner table,” he said. This was his introduction to Texas politics.

During his childhood his family was active both politically and civically. His father participated in the Southwest Voter Registration Education Project, helping to get Mexican-American voters engaged in politics. His work there led to his election in 1980 to the Frio County Commissioners Court, where he served for 16 years.

Although Adolfo Alvarez was an elected public official, the family still faced discrimination. Albert said he experienced racism in school, and he saw his father confront racism often.

“Law enforcement threatened (my father) many times,” said Alvarez. “It was tough because ... he was very outspoken. He had to fight many times just to prove his position.”

But those instances underscored the importance of challenging a system that too often left many residents unprotected.

Even though he was protected at home, Albert experienced discrimination in the schools of Pearsall.

“The Anglos did not want us to speak Spanish because, first off, they didn’t understand the language,” said Alvarez. “We overcame that. It bothered us to an extent.”

Besides the language barrier, school administrators had low expectations of Hispanic students.

“We were never pushed or encouraged,” he said. “I don’t think the administration or the teachers encouraged us to do something other than sports.”

After graduating from Pearsall High School in 1985, Albert enrolled at Texas A&I University in Kingsville, Texas (now Texas A&M University-Kingsville), about 35 miles southwest of Corpus Christi. During that time, he participated in college political campaigns.

“I just got that interest to become one of those persons who represent the people in the capacity of an elected official,” he said.

Alvarez graduated from A&I in 1990 with a degree in business administration and moved to San Antonio to work for the State of Texas Comptroller’s Office. He worked there from 1991 to 2010 in various capacities, including as an accounts examiner, legal assistant, criminal analyst and criminal specialist.

In 2010, Alvarez returned to Pearsall and found himself in a prime position to launch a political career in his hometown. Talking to people in the community, he realized that he was being called to serve.

Alvarez was elected mayor of Pearsall in 2011 and served two terms in office. Being elected mayor made him feel proud that he was able to be a part of what his parents had fought for. Even during and after his time in office, his father was always a role model for him.

“For me to understand the process and become a public servant just like my dad did, it was [the same],” he said. “I wanted to find out personally how I would be as an elected official and then also represent the people.

“Those early years (when his father was county commissioner) made a difference for me especially,” he said. “It wasn’t easy.”

Today Albert Alvarez continues to follow in his father’s path as the manager of the family business, now known as Adolfo Alvarez Inc., which has three auto parts stores in south Texas.

He hopes that America will continue to make progress so that more people can become politically active.

Mr. Alvarez was interviewed by Dylan Nikoletopoulos in Pearsall, Texas, on March 29, 2015.