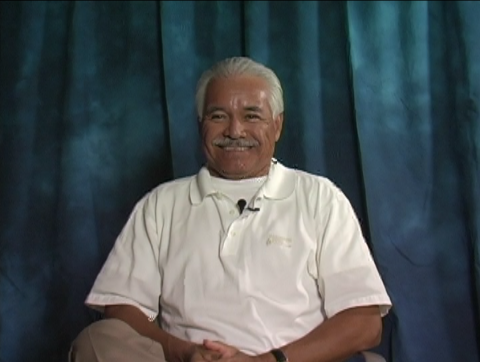 Once a migrant worker, Dan Arellano became a realtor; once a struggling student he turned into an author. Arellano had a way of taking life’s difficult lessons and making the most of them.

The Navy veteran used the discrimination he experienced as a Mexican American to fuel his desire to teach history so that others do not repeat the mistakes.

Arellano was born in San Antonio on March 12, 1947, but his family moved to Austin, Texas, only three weeks later. One of seven children, Arellano recalled that larger families were more common at that time. More children meant more hands to work in the field, which is exactly what his family did.

Although his father was a house painter, the rest of the family members (including Arellano’s mother) picked cotton as their source of income for years.  They traveled to various towns working the fields, sometimes all piling into the back of an 18-wheeler to go to the next location.

Arellano recalled that he was about 12 or 13 years old when his father died. His family was never the same, he said.  The young Arellano took on the responsibilities of making sure that the family got to their work destinations.

He recalled that he and his siblings would often miss chunks of  each school year  because of their  work.

“We would probably come back about 30 days after school had already started,” he said.

He recalled that when school counselors asked him what his father did, he told them that his father was a house painter. They replied that it was a very noble job, and suggested that the young Arellano should follow in his footsteps.

“Are you crazy?!” Arellano said that he had responded. He wanted a profession more along the lines of doctor or lawyer, and he wanted to know the necessary steps to reach one of those goals.  But with his father gone and a family to help support, a professional career seemed impossible.

He attended Travis High School in Austin, where he recalled constant fights. He described always having to walk with someone else, even when going to the bathroom, for fear of getting beaten up simply for being  Mexican.

Then came the U.S. military draft. Arellano did not take after an older brother who attended college as a way to avoid the draft, according to Arellano. He described his dilemma, being an 18-year-old enrolled in the Selective Service system who was at risk of getting drafted, and  lacking a prominent male figure to look to for advice.

He walked to the nearest recruiting station, which happened to be the Navy. He said that, if the nearest station had been the Army he would have walked in just the same. He served for six years on the U.S. mainland: three on active duty and three in the Naval Reserve.

Arellano’s face  lit up when he was asked about his first reactions to basic training.

“I didn’t know you were supposed to eat three meals a day,” he said.

After doing hard labor in the fields growing up, basic training was not terribly challenging for him. More significantly, it was a place where you could eat four hours after your last meal and get more food whether you were hungry or not. He went to the Naval Training Facility in Great Lakes, Ill.

“Quite frankly, I don’t remember if I [served in the military] because it was my patriotic duty or economic necessity,” Arellano said. “I’d like to think it was because of love of country, but…”

Arellano did not recall having experienced much discrimination during his military service. He mentioned the presence of other Latinos and said that they were very much the minority. However, he made it clear that this did not mean that Latinos were not discriminated against during the Vietnam War.

He was discharged in 1968 after serving for two and a half years as a hospital corpsman third class at the Charleston Naval hospital in South Carolina. He married Gloria Galvan in 1972 and had two children and five grandchildren. They bought a home in 1973 in Oak Hill, Texas.

After his service, he worked as a mail carrier for five years and  then became a realtor.

As a self-described historian, Arellano spoke passionately of how history repeats itself, especially in terms of war and social issues. That is why he worked to honor veterans and spread awareness of history. He also worked closely with Eastside Memorial High School, which has a large Latino population

As past commander and a current member of Tejanos in Action, a veterans service organization, he led the naming of Nicholas S. Perez Elementary School after a lance corporal who became one of the first Austin casualties in the Iraq War; had a post office on South Congress Avenue named after another Iraq casualty, and put on a six-month exhibit at the Austin History Center with the City of Austin, to  honor veterans from  that state capital.

He also wrote a book, “Tejano Roots: A Family Legend,” which was published in 2005 and took him 10 years to research and write. It focuses on the Battle of Medina, an 1813 clash about 20 miles south of San Antonio that is believed to have been the bloodiest battle in Texas. Spanish colonial forces quashed a pro-Texas independence rebellion by an expedition of U.S.-backed Tejanos and Native Americans, according to the Texas State Historical Association.

He published another book on Texas history in 2008 and has more recently worked on a collection of short stories also pertaining to the state’s history.

Arellano remained politically active in Austin after his military service. At the time of his interview, he was working to have a hospital named for the late Master Sgt. Raul (Roy) P. Benavidez, a Medal of Honor recipient. He also was active in trying to prevent the Texas State Board of Education from removing from state textbooks such figures as the late Supreme Court Justice Thurgood Marshall and Dolores Huerta, a civil rights leader and United Farm Workers of America co-founder. The board of education did delete Huerta’s name from some textbooks.