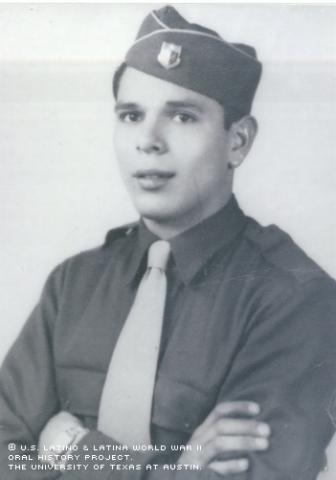 During the landing at Salerno, Abner Carrasco was shooting at a German Panzer, a heavily armored tank, when its turret suddenly pivoted and pointed directly at him. Facing his potential death, Carrasco kept firing and was surprised when the tank drove off.

He’d spent his childhood working odd jobs, from picking tomatoes to caddying at country clubs or setting up pins in bowling alleys. He says he joined the Texas National Guard in 1938 "for fun," not thinking the United States would ever go to war.

In 1940, the 36th Infantry Division was mobilized and Carrasco was sent to Camp Boyd, Texas, for training as a machine gunner.

In 1943, Carrasco and his division unit were sent overseas to Morocco. From there, they participated in the Battle of Salerno, which Carrasco says was difficult because the Germans were well-trained soldiers with superior weaponry, and the American troops weren’t accustomed to the hilly terrain and were making their debut into combat.

"Everything was so disorganized," he recalled. "The first plane we shot down was a British Spitfire."

Later, as his unit fought into San Pietro, Anzio and Battipaglia, Italy, Carrasco was struck in the right leg by a mortar shell. He spent two months in a hospital in North Africa. Then, when he was sent back to Italy, he re-injured his leg.

Carrasco was sent back home to the States and relieved of his duties by a medical discharge. Back home, he took advantage of the GI Bill and learned how to be a tool- and die-maker.

After a few years in that trade, he formed a new interest and began to work as a quality control engineer at Hughes Aircraft. Later, a job at Lockheed Martin sent him to Iran for two years.

Carrasco retired at 68. He loves spending time with his four children and grandchildren.

Mr. Carrasco was interviewed in Palm Springs, California, on June 30, 2004, by Steven Rosales.