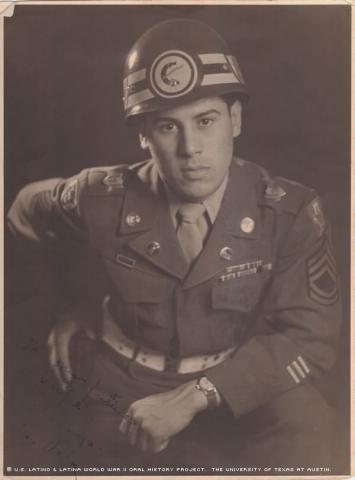 Most people hope to retire around age 65, but hard-working Abel Vela stayed busy well into his 70s.

After 27 years in the Army and more than 30 years of owning and operating a number of McDonald’s franchises throughout San Antonio, Texas, the 81‐year‐old Army Major says volunteering for the Purple Heart Association and at his church have taken the place of work.

“And in my free time, I work for a young lady. Her name is Angela Vela, and she keeps me very busy,” said Vela with a laugh.

Since retiring in 2003, Vela’s free time has also enabled him to spend leisure time with his 15 grandchildren and, at the time of his interview, 18 great‐grandchildren, which his Army career kept him from doing with his own five children.

“I would be in the room and the kids would point and say, ‘Who’s he?’ and my wife would say, ‘He’s your dad,’” Vela recalled.

“My father was a sharecropper,” Vela said. “He would grow cotton and corn, and raise pigs, cows and chickens.”

It was not an easy life. Vela and his siblings, Manuel and Olivia, worked alongside their mother and father in the fields.

“Once a week we would go into Beeville and my dad would buy us an ice-cream cone,” Vela said. “It was the only treat we got.”

The family moved to San Antonio when Vela’s father became ill with tuberculosis. Aurelio was unable to work, so Vela recalls depending on welfare from the Red Cross and the American Lutheran Church near their home.

Vela attended Barkley Elementary and Lanier Middle and High School while living in San Antonio’s predominantly Latino West Side. Though working every evening kept him from being involved in many school activities, Vela did manage to play drums in the band.

“The only free time I had was when I’d go to the games,” said Vela, “and I knew that if I joined the band, I could see the games for free.”

Vela also joined Lanier’s Reserve Officer Training Corps program. He had decided early on that he wanted to join the military.

Vela also had a more endearing reason to join the service:

“After receiving all the help from the Red Cross and the welfare department, I felt like I owed something to my country,” he said.

After graduating from high school in 1943, Vela volunteered for the Navy, because his brother was already enlisted.

“I liked the way he talked to me about the Navy,” Vela said. “It was a nice place to be, nice uniforms, good food and three meals a day.”

After the Navy turned him down, Vela volunteered for the Air Force and then the Army, before finally being accepted. He enlisted in January of 1944, near the end of World War II, and after only eight weeks of training, was sent overseas to Germany. He was a mere 18 years old.

As a member of the 644th Tank Destroyer Battalion, Vela was assigned to reconnaissance up front, meaning he was the “eyes and ears” of the tanks following behind. Contrary to many soldiers, Vela enjoyed his duties.

“I was motivated; my whole attitude was positive,” he said. “I never complained in the Army, but I’d always hear other guys complaining, ‘Oh man, I wish I was back home with my dad. I’d be running the store or doing this for him.’ But my dad didn’t have a job at the time so I didn’t have to worry about that.”

That good attitude and hard work ethic he had developed as a child didn’t go unnoticed, and Vela began moving up the ranks.

Though Latinos weren’t in segregated units like blacks, Vela says some Anglo soldiers were upset he was promoted before they were.

“They thought I was getting preferential treatment, but it wasn’t that,” Vela said. “I was doing my job and I was going the extra mile.”

After the war in Europe ended, Vela, then a sergeant, was stationed in Wels, Austria. There, he met Angela Haager; they married May 28, 1948.

Vela was discharged the following month, and he and his new wife returned to the United States. He received a degree in Finance and Accounting from St. Mary’s University in San Antonio, where he was in ROTC.

After graduating with honors, Vela decided to further pursue his military career. He returned to the Army and asked for parachute training and to be assigned to an airborne division, much to his mother’s disapproval.

“To make this a career, you have to volunteer for a lot of things that are dangerous,” Vela told his mom. “You have to prove to the Army that you’re willing to die for your country.”

Vela remained in the Army until he retired from it as a major in 1970, following the Vietnam War. His military success had earned him the Purple Heart; a bronze arrowhead, a small device worn on a campaign ribbon indicating the wearer participated in an amphibious or airborne assault; a Good Conduct medal and a Vietnamese Medal of Honor, among other decorations.

“I wasn’t looking for Purple Hearts,” Vela said; “that’s taking a big chance. My job was to save people’s lives.”

Vela’s military achievements and discipline helped him achieve success in business as well. He became the first Latino to own a McDonald’s in San Antonio and owned more than 10 others before retiring, something he may have never accomplished without the Army.

“There was some prejudice … They didn’t want any Hispanics, or blacks. But since I was a veteran … an officer, and, I fought it,” Vela said. “If you don’t ask for it, you’re not gonna get it. I went over to [McDonald’s] headquarters and took my cot with me and slept there, until I was able to get an interview ….”

Though Vela had a successful military career, it wasn’t without heartache. The memories he will never forget are the terrible images he saw, the friends and comrades he lost and how close he came to death, especially when freeing Jews from concentration camps.

“They walked out and started eating grass, the bark of the trees, whatever they could find. They were skin and bones,” Vela recalled.

He watched members of his tank unit run over a mine.

“We had to pull them out of their vehicle afterwards. Pieces of legs and bodies were strewn all over the place,” said Vela, who was nearly killed by a mine himself.

Vela says he wears his uniform in memory of all who were lost.